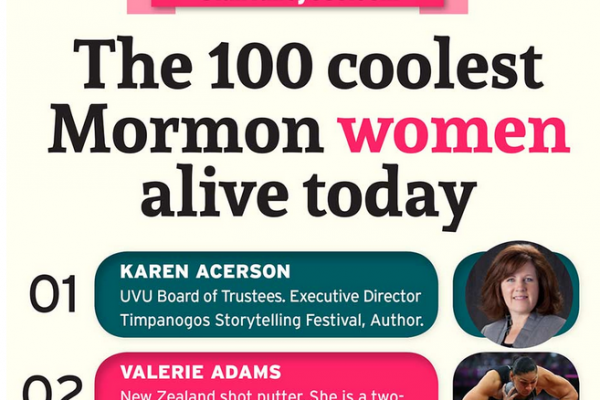 Just yesterday we shared a post on remarkable Mormon women and today we found a piece by Elizabeth Stitt via Utah360 on 100 of the coolest Mormon women alive today. The list, found here, is full of athletes, actresses, judges, entrepreneurs, and many others. Below are Stitt’s thoughts on what it takes to get on the “cool list.”

How do people get to be so awesome?

Recently I read an article about the 100 coolest Mormon women alive today. As I read through the list of their accomplishments, I was struck with the thought, “How on earth do I become like one of those women?” And I started thinking of more and more awesome women and what they do. Women who write books that sell like hotcakes. Women who write blogs that have a million page views (I mean, mine is nearing 10,000 and that’s a pretty big deal for me). Women who start their own businesses or teach at important universities or play an instrument like a boss or don’t just know politics but articulate their thoughts without sounding like a goon (why do I get so tongue-tied?). Or, you know, are skeleton racers in the Olympics. Cool, right?

Sure, I can try and blame my normalcy on my “youth”. Not so fast. Annie Henrie, a wonderful artist (one of my most favorite paintings is hers)–she’s my age. We were in the Sterling Scholar program together (not the same category of course, just on the same printed program, but still). Lindsey Stirling. I helped mentor her during her freshman year at BYU. Kelsey Nixon? We were friends in high school. Ok, I’ll have to stop name-dropping here, because I actually know A LOT of really cool people and I don’t want to leave anyone out. (Oh, and Annie wasn’t actually on the “list” but even so, I think she should have been, and examples in threes work better, so…there).

So I may be wrong but I don’t think it’s necessarily a feeling of jealousy or envy–rather a (hopefully) righteous feeling of wanting to be influential.

The rest of her blog post can be found on lizstitt.blogspot.com/