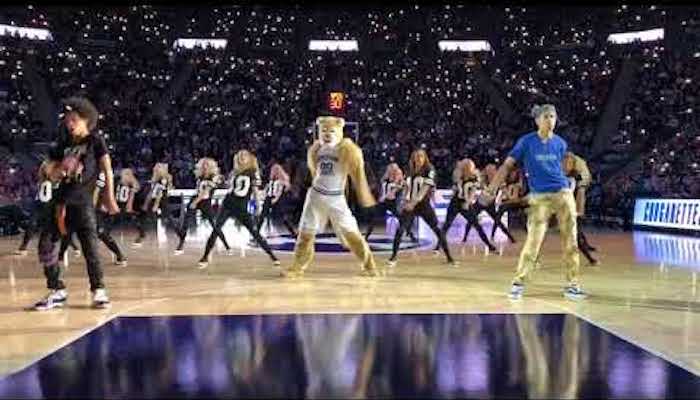 Cosmo and the Cougarettes recreated their “Rolex” routine with Michigan-native hip-hop duo Ayo & Teo during a basketball game at the Marriott Center last Saturday.

Warning: if you watch this, “rolly, rolly, rolly” will be stuck in your head for the next week.

Cosmo and the Cougarettes originally performed this routine during a football game last October. The routine went viral, so much that they performed it again—this time inviting the artists themselves to add their own moves.

BYU has not revealed the identity of the Cosmo but we know he is a senior, one of over 40 people who has dressed up as the famous mascot since 1953.

Ayo & Teo, who famously sport masks when they dance, have performed in videos for Usher and Chris Brown. Their song “Rolex” rose to number 20 on the US Billboard Hot 100 in 2017.

According to ESPN960, this is the first time BYU has hosted a hip-hop group of their caliber.

But judging from the screams coming from over 13,000 fans and thousands of views on social media, maybe they should do it more often.

Cosmo the Cougar is the best dancer in the mascot world, and it's not close.

What should Cosmo and the Cougarettes dance to next? And who should they dance with?

The Internet is Freaking out Over BYU’s Cosmo and the Cougarettes
Can any other College Mascot Meet the Cosmo the Cougar Dance Challenge?