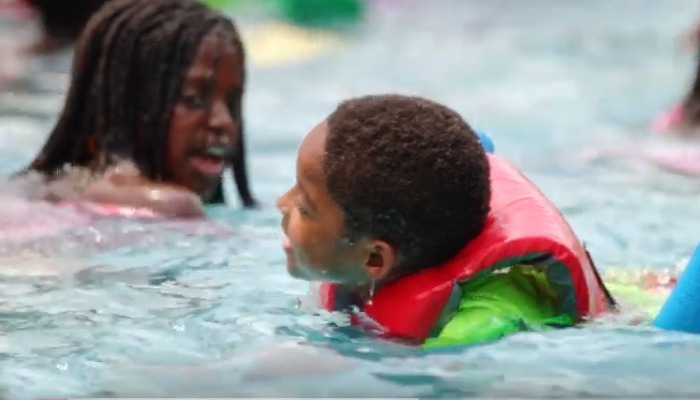 You may be surprised to learn that Utah has the highest rate of adoption of Black babies by White parents. That’s wonderful, but it comes with its own set of problems. This movie addresses them. And yet, this film isn’t about adoption (it’s a very helpful film if you are looking to adopt or know someone who has) it’s about racism. However, if you watch the film with the idea of you being the parent then you can start to see more how this issue impacts all of us and your place in it. If you are someone who cares and just wants to learn more then this film can help.

Black, White, and Us is premiering at this week’s LDS Film Festival at 2:30 pm on Saturday in the SCERA theater in Orem, Utah. Get tickets and info at http://ldsfilmfest.com/   To learn more about Loki, his mother, and their mission visit https://joantrumpauermulholland.org/

The following is an interview with Loki Mulholland, creator of Black, White & Us.

You’re obviously committed to promoting racial equality and interracial friendship. Where does this passion come from?

It definitely is part of my upbringing but more so from my religious and philosophical convictions that we should practice what we preach when it comes to our faith and our belief in what America can and should be. Equal rights is not a finite resource and when someone feels they aren’t enjoying the same rights as others we should work to understand that instead of pushing against it. God is no respecter of persons. He is the Creator of everyone. If we truly believe that we are all God’s children then we should want what is best for everyone. When the prophet says racism is a sin then we need to listen and see what that says about ourselves and where we can improve.

Your mom is a civil rights hero. At what point in your life did you realize that? What effect did it have on you?

My mother would say she is not a hero. She would say she is as ordinary as they come. Of course, we all know better. Anyone who is willing to risk everything, even their very lives, for the betterment of others is a hero. Growing up, she was just mom and people from the Civil Rights Movement were just family friends. In high school I started to realize that the photos of my mother at the lunch and those with Dr. King weren’t your typical family photos.

However, I really didn’t realize the impact my mother had until I made my first award-winning documentary, An Ordinary Hero in 2011. It was during the 50th Anniversary of the Freedom Rides and people would start to tell me the amazing things she did and how much she meant to them and the Movement. I would call museums and archival places about getting access to certain photographs and the response was always the same, “For Joan… anything.” Since then I’ve seen that scene repeated countless times as total strangers thank her.

It changed the course of my life. I knew then that I had to preserve and share my mother’s story. The responsibility fell on me to do so while continuing her legacy and so I created a foundation that exists to end racism through education and one of the major vehicles we do that through are the films we produce.

How did the particular subject of prejudices faced by Black children, and the white families who adopt them, come to be the focus of your new documentary?

Completely by chance. It was a film on my way to another film. I was actually waiting for another film to be approved by the matriarch of the family when I was invited by the Domino Foundation to attend a seminar being held by Darron Smith. I was a fly on the wall as I listened to the families talk about their personal and societal struggles being white parents of children of color. It’s something I had never thought of and I thought, “Wow, these are families addressing racism on such a personal level because they are forced to. What if we all made racism personal?” I texted my cameraman, Tyson Maughan, and said, “I found our next film.” I approached Curtis Linton, the co-founder of the Domino Foundation, about doing a documentary and we were shooting within a month. Of course, about two weeks later the other film was approved and so now I was stuck producing two films simultaneously.

You’re an active and devout Latter-day Saint. Our faith has a shaky history when it comes to race relations. How do you reconcile our history with your life focus?

I am an active card-carrying member of The Church of the Jesus Christ of Latter-day Saints. It raises a lot of eyebrows outside of Utah when people learn that because I speak on issues of racism throughout the country and being the son of a Civil Rights icon. Our church, like our country, has a “shaky” history when it comes to race relations. Hiding from doesn’t serve any purpose and only makes things worse. It’s uncomfortable, that’s for sure, but it’s necessary to have those hard conversations.

Yes, our church, like many others has a history. Our church, like our country, is not perfect. We strive to do good. I feel as a Latter-day Saint, and as an American, that we should strive to be our best selves and part of that is helping us recognize where we have fallen short and can improve. We aren’t there yet but I feel the Church is working to correct the wrongs and move forward with their progressive essays on race. However, it is frustrating that most people don’t even know they exist. The congregation hasn’t quite caught up with the leaders.

These sorts of issues can’t be resolved with a simple plea for unity and brotherhood. It takes a long-view commitment. As my mother said, “I can’t do everything but I can do something because doing nothing is not an option.” We all have a role to play in making our church and our country the best it can be.

What positive Latter-day Saint doctrines about race speak to you? What positive trends do you notice? Where can we improve?

I guess I should’ve read this question before answering the last one. I see the transparency of the Church in their desire to want to do more. I see them partnering with the NAACP. I see our filmmakers producing films like Jane & Emma. I see the programs they held during the 40th anniversary of the lifting of the ban on the priesthood for those of African descent. I see the members of the Church speaking out and being active in their roles as participants in this wonderful gospel. My films, An Ordinary Hero and The Uncomfortable Truth are available through Deseret Book.

However, I think what was most telling for me was when a group was allowed to screen The Uncomfortable Truth on campus with a discussion. It was in the morning but we had a great turn out. During the Q&A I was asked about Brigham Young and I said, “Brigham Young was a racist.” The audience erupted in applause. Someone then asked if I felt the Church had made progress. My reply was, “Twenty years ago if I had said what I just said about Brigham Young I would’ve been reprimanded and I know for certain this film wouldn’t have been screening here on campus. So, yes, we’re making progress.”

Naturally, we want everything to be perfect now but it doesn’t work that way. There are those who wish the Church was doing more years ago. My take is: at least they’re doing something. It has to start somewhere. My mother was asked once if during the Civil Rights Movement if they ever thought there would be a Black president. She said they just wanted to allow everyone to be served at the lunch counter and be treated equally. Having a Black president was the furthest thing from their minds but if they hadn’t pushed for rights that were achieved it would have never have had the chance to even happen.

Tell us about the making of Black, White, and Us. Where did you find the families? Any experiences while filming that brought you closer to God?

Shooting Black, White & Us was very straight forward. Everything just kind of fell into our laps. I wish I could say it was a struggle but it really wasn’t. Curtis Linton with the Domino Foundation lined up the families for us and we were shooting in a matter of weeks. The challenge came when we tried to find someone from the industry who could provide insights into how the system works because some of their practices are, quite frankly, not ethical in my mind. We weren’t trying to ambush anybody.

Parents kept talking about race-based pricing and so we wanted an agency to talk about it from their point of view and so we found one that would. The surprise is in what she had to say. I can’t say there was a specific experience that brought me closer to God with this film. I can say that it did open my mind and heart more to what we all need to do be more like our Heavenly Father. These families truly exemplify what it means to be our brother’s keeper and to truly love our neighbors as ourselves even when your own family is against you.

Let’s say I’ve got a friend who’s normally not into documentaries. Why would they want to check this out?

Documentaries have been and hopefully always will be a window into the more intimate parts of the world around us. It’s a way for everyone to draw closer together and see things through a different lens. It doesn’t mean you have to agree with what is being said but it can help us understand where other people are coming from which allows us to better communicate and empathize. I try to make the difficult topics of race and racism in America personal by sharing real stories and how they connect to the greater whole.

Jonathan Decker is a family therapist and clinical director of Your Family Expert. He is an actor, author, comedian, and television personality known for his book 250 Great Movies for Latter-day Families, co-hosting The KJZZ Movie Show, and starring in CTU: Provo and BYU’s Divine Comedy.  He’ll be judging at this year’s LDS Film Festival.