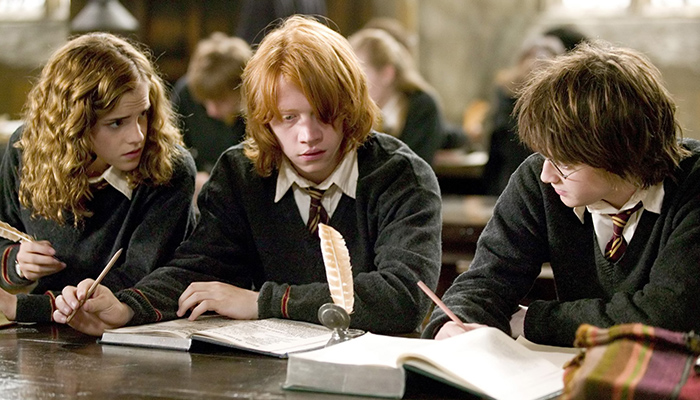 In December of 2014, our own Abby Thorne wrote an article called The Hobbit / LOTR Quotes and their Scripture Equivalents here on thirdhour. I couldn’t help but think that if this worked with the works by J.R.R. Tolkien, then why wouldn’t it work with a little more modern work by J.K. Rowling?

The wizarding world of Harry Potter has many instances of characters overcoming obstacles to become something greater, times where, the characters think they won’t make it another step, and others still when we’re left wondering how someone could ever say something so profound. Similarly, the scriptures tell stories of overcoming adversity, becoming better, and have an abundance of thought-provoking words.

Everyone Has Divine Potential

On his eleventh birthday, Harry Potter is surprised when he learns of is hidden identity. Hagrid, after bursting through the door to his temporary island home, says, “You’re a wizard, Harry” (Sorcerer’s Stone). He’s taken aback at this. How could such a young and insignificant boy be something so magical? He’s a wizard, and a famous one at that.

Each one of us has a secret hidden inside of us too. God has said to us, “Ye are gods; and all of you are children of the most High” (Psalms 82:6). We all have divine potential hidden within us. God has promised us everything that he has in his kingdom. Like Harry, we are more than we would appear at first glance.

Christ’s Light is Accessible to Those Who Follow Him

With dementors appearing near the school grounds and fear abounding throughout Hogwarts, Professor Dumbledore speaks to the assembled students, giving them a bit of hope in trying times. He says, “But you know, happiness can be found even in the darkest of times if one only remembers to turn on the light.” (Prisoner of Azkaban). Alluding to the patronus charm, Dumbledore leads his students towards the very thing that will save them from any dementors who come near. Similarly, we have a light that will cast away darkness from us. Christ says to his apostles, “I am the light of the world: he that followeth me shall not walk in darkness, but shall have the light of life” (John 8:12).

By choosing to follow Christ, we have our own patronus charm with us at all times. We can cast away the dark and the servants of Satan by following closely to the precepts that He has laid out in the scriptures. This is a gift promised to all of those who choose to follow Him.

In a very frightening moment for all of Hogwarts, and the entire wizarding world, Dumbledore asks that everyone be united in light of Voldemort’s return. He says, “We are only as strong as we are united, as weak as we are divided.” (Goblet of Fire). If they are to be successful, they need to stick together. We too have the same need, and are implored by Christ who says, “…Every kingdom divided against itself is brought to desolation; and every city or house divided against itself shall not stand” (Matthew 12:25). As members of the Church, it is very important to build each other up. These are tough times, and they will continue to be hard. If we are to stand, we must stand together, and we can be victorious with the Lord when he comes again.

We Can Forget Our Past Sins and Look to the Future

The Mirror of Erised is a beautiful piece of magic. When one looks into it, they can see their greatest desire revealed to them. Harry, after having seen his family within the mirror, goes again to experience a few moments with the parents he never knew. Dumbledore comes up behind him and says, “It does not do to dwell on dreams and forget to live.” (Sorcerer’s Stone). He warns that spending too much time in front of the mirror will erode at the confidence every person should feel for themselves.

Many of us have probably felt, at times, that we can look into our own mirrors and see things that have happened in the past as defining who we are. While it is good to reflect on things that have happened in the past, we should forget the sins and mistakes we have made. Alma the Younger had done some terrible things, but recalls when speaking to his son Helaman, that even though he had done these awful things, “[He] could remember [his] pains no more; yea, [he] was harrowed up by the memory of [his] sins no more” (Alma 36:19). As we repent of our past mistakes, we should look forward to a brighter future, rather than turn backward and focus on that which we have already left behind.

The Spirit Whispers to Your Mind and Heart

During the final fight for Hogwarts, Harry Potter sacrifices himself when he realizes that he is the last horcrux needed to defeat Lord Voldemort once and for all. When he dies, he is met by Dumbledore, who explains many things to him. Among the many pieces of wisdom given, Dumbledore says, when asked by Harry if it’s happening in his head, “Of course it is happening in your head, Harry, but why on earth would that mean that it is not real?” (Deathly Hallows). This shows Harry that there is more to his world than that of the physical realm and that he can trust the things that happen inside his mind.

Many of our deepest and most personal revelations come through the whispers of the Spirit. Generally, we’re not going to see an angel or hear a voice come down from heaven, but God says he’ll “tell you in your mind and your heart, by the Holy Ghost, which shall come upon you and dwell in your heart” (Doctrine and Covenants 8:2). These feelings aren’t outward expressions of divine inspiration but are hidden deep within us. But, as Dumbledore says, that doesn’t mean they aren’t real.

Refuse the Evil, and Choose the Good

In the fifth film, Sirius Black gives some great advice to a downcast Harry. He says, “The world isn’t split between good people and death eaters. We’ve all got both light and dark inside us. What matters is the part we choose to act on. That’s who we really are.” (Order of the Phoenix). Harry has to learn that everyone has to make choices. There are some people who, while generally good, make poor decisions and vice versa.

In the book of Isaiah, the same principle is taught. We must, “know to refuse the evil, and choose the good” (Isaiah 7:15). Choices make up a large portion of our lives. The natural man inside each and every one of us is constantly fighting to come forward and choose the darkness. Every time we have to decide whether or not to pray, to eat our brother’s cookie, or stop that movie, we choose between light and dark.

Ask and Ye Shall Receive

Hogwarts has been a place of solitude for many hundreds of years. Wizards from all walks of life are admitted to the school and allowed to learn under some of the greatest teachers available. When trouble arises, and Lucius Malfoy tries to have Dumbledore removed from the school, the headmaster says to Harry, “You will also find that help will always be given at Hogwarts to those who ask for it” (Chamber of Secrets). The only stipulation Dumbledore gives is that someone must ask for help. There are no other requirements nor restrictions.

The Lord has given the same promise time and time again. He has said, “Ask and ye shall receive; knock, and it shall be opened unto you” (Doctrine and Covenants 4:7). He does not require that we do anything above and beyond. We must act in faith and ask for an answer and he will give us the aid that we require.

Fear Not the Darkness, For I Am With Thee

In the Half-Blood Prince, Dumbledore consoles Harry by saying, “It’s the unknown we fear when we look upon death and darkness, nothing more” (Half-Blood Prince). This consolation comes at a time where things aren’t looking very good for the wizarding world. Death is closing in on many, and there seems to be little that Harry can do to stop it.

At times, darkness seems to surround us as well. David says, “Yea, though I walk through the valley of the shadow of death, I will fear no evil for thou art with me; they rod and thy staff they comfort me” (Psalms 23:4). We need not fear the darkness nor death when we have the Lord with us. He will always be there to hold us up in even the most trying of times.

What do you guys think? There are so many different quotes from the Harry Potter books and movies, that I couldn’t fit them all here. Are there any others that you’ve found compare well with scriptures? Post them in the comments below!