Stirling was also nominated for the Top Dance/Electronic Artist award. However, Calvin Harris ended up winning the category.

As a violinist, Stirling was thrilled that she won the Top Dance/Electronic Album award for her album “Shatter Me,” and told a reporter at the Billboard Music Awards,

I can’t believe I won!

In the video shown above, Stirling explained why she likes the fact that her music is difficult to categorize. “I feel like being able to defy categories is what makes us unique and what makes us special.” 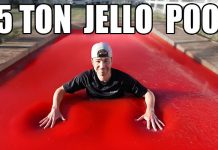