Have you seen quizzes like, “Choose your 5 favorite flavors of ice cream and we will guess which Disney Princess you are with alarming accuracy.” Well, I thought it might be fun to see who our favorite scripture heroes would be if they were in the movies. The lives of these movie popular movie characters are more similar to those in the scriptures than you may think.

Here are 9 people in the scriptures and their movie character doppelgangers. 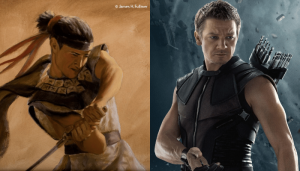 Teancum from the Book of Mormon led an army to victory and is best known for sneaking into the enemy’s tent in the dead of night and spearing their leader in the heart. He is also described in Alma 62:37 as “a man who had fought valiantly for his country, yea, a true friend to liberty.” Teancum was a general in an army led by Captain Moroni.

Hawkeye is also known for his stealth and is a trained assassin. Teancum is famous for his javelin work while Hawkeye is a renowned archer. He was formally trained in tactics and hand-to-hand combat by Captain America.

Related Link: Could a Mormon Superhero Appear in a Marvel Movie?

Mary and Martha—Anna and Elsa 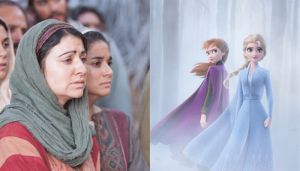 This 2-for-1 sister duo in the New Testament is known for being the opposite of each other. Much like Anna and Elsa in the movie Frozen, these sisters take care of each other and those whom they befriend.

Martha is much like Elsa, anxious, a bit of a perfectionist, but a faithful friend. Mary is much like Ana, curious and accepting of people. Together these sisters always make sure that things are taken care of. 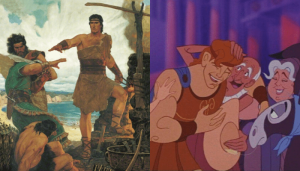 Nephi was “born of goodly parents” and was “large in stature.” He was also a faithful leader of his people. He became strong in the Lord through exercising his faith and he became physically strong by building boats, weapons, tools, and of course by hiking through the wilderness for basically his entire life.

Hercules was raised by amazing earthly parents, and his heavenly parents also loved him very much. Once Hercules realized his potential he knew that he could go the distance. He trained and worked to become the hero that the people needed. Not to mention he was large in stature too. 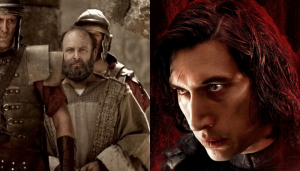 SPOILER ALERT: If you haven’t seen Star Wars: Rise of Skywalker then don’t read this one.

Saul is the original Jewish name of the Apostle Paul. Before he became Paul, he was persecuting Christians. His conversion to the Lord is recounted in the New Testament. He went from being a bad guy to a good guy, much like Kylo Ren.

Kylo Ren started out as a ruthless leader. Killing his own father and fighting a war against his mother eventually led to a softening of his heart. His original name, Ben Solo, is what he started to go by right before he died, protecting the Jedi. 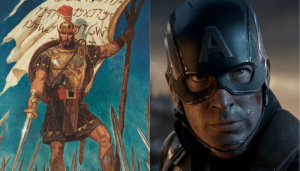 Perhaps a more commonly drawn connection is this one between Captain Moroni and Captain America. Both were captains of large armies and were very dedicated to the cause of freedom.

Moroni’s title of liberty in Alma 46:12-13 is a pretty bomb explanation of how he feels about protecting his country and family. Captain America is a valiant soldier with a vibranium shield of faith. 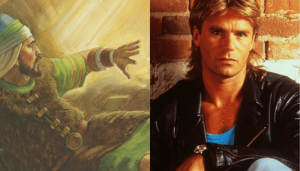 Do TV Show characters count? I’m going to let it slide because these men both have a knack for problem-solving that ends up saving people. MacGyver is quick on his feet and always has a solution to the problem, whether it’s making a lie detector out of a blood pressure pump and an alarm clock, or boots out of duct tape and a plastic mat.

The Brother of Jared is a little bit different because when he asks for the Lord’s help, the Lord instructs him and gives him plans. But either way, he “McGyvered” barges that were fully equipped with food, air, and light. While all of this was inspired and directed by God, I’m sure that making glass stones isn’t easy when you start with nothing.

Inspiration from God would have only made the actual MacGyver better. 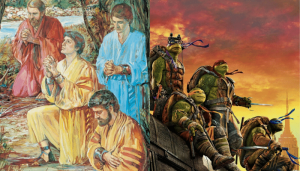 Ammon, Aaron, Omner, and Himni, also known as the Sons of Mosiah, served many missions throughout the land and witnessed great miracles as a result. The account of their travels is written in Alma. These four brothers knew what it meant to prepare for anything.

Four other brothers are the famous movie characters, the Teenage Mutant Ninja Turtles. Michelangelo, Donatello, Leonardo, and Raphael have trained for years with a rat Sensei named Splinter. Together, they are on a mission to protect New York City. 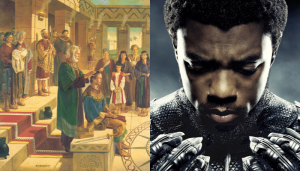 King Benjamin in the Book of Mormon was a king who chose to labor beside his people. He gave pretty great inspirational speeches and he inherited the throne from his father Mosiah.

The characters T’Chaka and T’Challa in Black Panther fought beside their family and friends and prepared them for battle. When T’Chaka (the father) was killed, T’Challa (the son) took his father’s place as a ruler of the people and also became the Black Panther.

Both King Benjamin and the Black Panther were faithful, reliable, and protected their people at all costs.

Jacob and Rachel—Westley and Buttercup 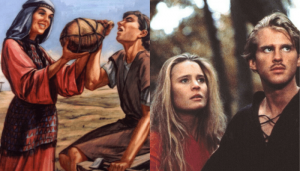 Another 2-for-1 coming your way! Jacob worked for 14 years to marry Rachel, and I can just imagine him saying “as you wish.” He promised Rachel’s father that he would work for 7 years in order to marry her. When the time came, he was tricked into marrying her older sister. He committed to work another 7 years for Rachel.

Westley worked on the farm owned by Buttercup’s family and the two were smitten with each other. When Buttercup announced that she loved Westley, he immediately left the country with no explanation. He had decided to work for years in order to gain a fortune large enough to marry Buttercup.

These characters resemble Rachel and Jacob and finally, both couples end up together. We love a happy ending.

What other movie characters have scriptural counterparts? Share in the comments.