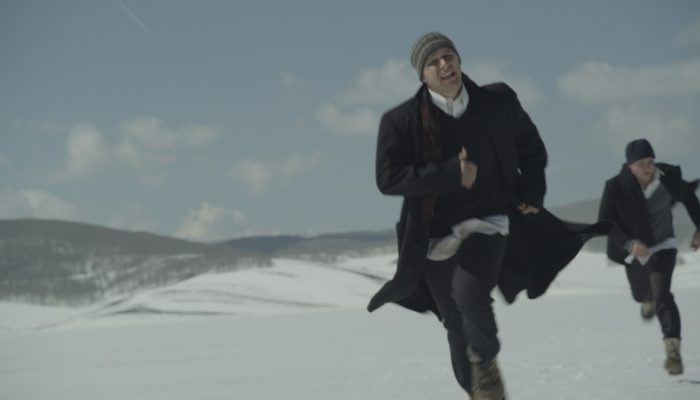 “The Saratov Approach” is a movie that relates the events that occurred in the lives of two 20-year old missionaries for The Church of Jesus Christ of Latter-day Saints (inadvertently referred to as the “Mormon” Church by the media and others).  Travis Tuttle (Corbin Allred) and Andrew Propst (Maclain Nelson) were kidnapped in Saratov, Russia, on 18 March 1998 while serving their two-year mission for the Church in the greater Samara Mission. They were held captive for 5 days, and the ransom demanded by their captors for their release was $300,000.

Not only does the movie reveal the ordeal that Tuttle and Propst experienced during their captivity, but it also gives the audience clear insight into the lives of their family members and how they coped as they earnestly prayed for the safe release of their loved ones.

A Riveting Story from Beginning to End

One viewer of the movie, Pam Peebles, said, “The Saratov Approach is a movie that is gripping and has the viewer in suspense from the moment it begins. . . . It follows them through their entire ordeal.  From the missionary appointment that led to their kidnapping until their release at the end. . . . A must see for every Latter-day Saint.” To Pam’s comments I would add that not only is this a “must see for every Latter-day Saint,” but the movie contains a powerful message of faith, endurance, perseverance, love for those who persecute us, and the power of fervent prayer that is of benefit to any viewer regardless of their religious beliefs or affiliations. This is aptly portrayed in various scenes throughout the movie as people of various faiths and denominations are seen joining their prayers with those of family membersand friends of the two young missionaries for their safe release.

Josh Terry in his Deseret News article dated 9 October 2013 stated, “It is a successful film for many reasons, but none more impressive than its ability to keep you in suspense when you already know the outcome of the story.” He continues,

The Saratov Approach” is a film that could easily falter as it gets lumped into the category of Mormon cinema, and the well-tread subcategory of missionary movies that is so prominent within it. But director Garrett Batty’s effort is admirable, not just because he’s trying to emerge from an uneven and often maligned genre, but because he’s successful.

The first half-hour of the film, heavy on hand-held camera work and an intense original soundtrack, feels almost like “God’s Army”-meets-“Bourne Supremacy.” But just when that dichotomy starts to feel tired, Batty settles in for a more intimate focus on the plight of the missionaries, and the good work really happens. The final result is suspenseful, faith-promoting and very entertaining. [1]

Humor in the Midst of the Fire

Although the faith of the two young missionaries is tested under fire throughout the movie, there are a few brief pauses where humor is blended in, allowing for a breath of fresh air in an otherwise grave situation. Pam, a recent viewer of the movie, commented, “Even in the midst of the anguish they are feeling, they never forgot that Heavenly Father was watching over them.  And the amount of humor through the movie helps to lighten a very somber situation.”

The acting job by their captors is no less impressive. Seasoned moviegoers may snicker to see one of the kidnappers wearing an Adidas track suit, the modern de facto attire of Russian bad guys throughout Hollywood. But Nikita Bogolyubov and Alex Veadov are gripping and even sympathetic as Nikolai and Sergei, a pair of auto mechanics who kidnap the missionaries out of their own desperation. [1]

In a short period of time, “The Saratov Approach” has captured the attention of movie goers all across the country, and has become a box office phenomenon. The film which opened in October 2013 in a limited number of theaters (shown on only 23 movie screens), grossed almost $500,000 in only a two week span, with an average gross of $11,000 per screen during the opening weekend. Although the movie is about two Mormon missionaries and the ordeal that they went through, the overall appeal of the movie far surpasses any preconceived expectations that this is just another movie about Mormons. In its short run in theaters nationwide, it has proved to be more -much more.

As more and more people begin to learn about how captivating this movie is via word of mouth from those who have already seen it, as well as through various social media venues, it continues to gain more momentum. By November 2013, the movie had already grossed a million dollars. No other LDS-themed film including such films as “God’s Army,” “The Other Side of Heaven,” “The Singles Ward,” or “The Work and the Glory,” ever grossed such revenue in that short time period. “The Saratov Approach” is now being shown in theaters in 21 states, as well as parts of Canada. “In fact, the nation’s largest theater chains including Regal, AMC and Cinemark are requesting the film have a wider footprint based on its early success.” [2]

Propst and Tuttle were able to view a rough-cut of the movie in advance, but the first time that they actually saw the completed film was with their families when it premiered in October in Utah. Propst is currently living in Meridian, Idaho and Tuttle resides in Gilbert, Arizona. They stay in contact with the producer Garrett Batty, speaking with him at least once per week, and they also make guest appearances at premieres and special showings around the country as the film reaches more and more theaters.

Not an Ordinary Missionary Movie

Great time and effort went into producing a movie that is not just another movie about the day-to-day life and trials of missionaries of The Church of Jesus Christ. “The Saratov Approach” is a movie that is set apart from the normal genre of movies that it could easily be categorized into.

“The Saratov Approach” is a movie about forgetting about self and completely surrendering to the will of the Lord. It is a movie that touches the soul, and reveals that the Lord has a purpose and a plan in all things – including the tests, trials, and adversities that we face in life. It is a must-see, not to be missed movie, not only for Latter-day Saints, but for people of all faiths, denominations, and beliefs, and even for those who may profess to have no faith at all.

By Keith Brown and Pam Peebles.