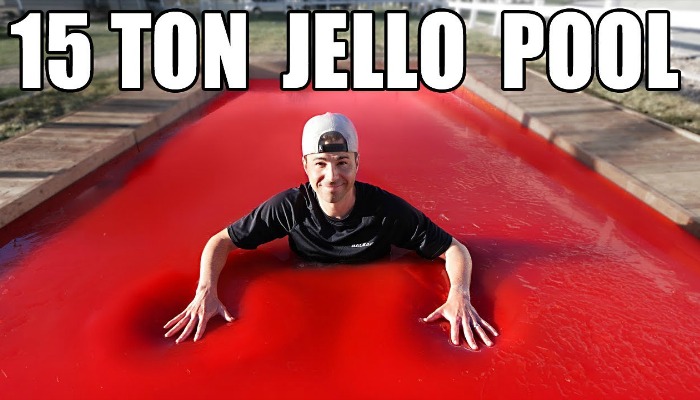 If you never had the childhood dream of jumping into a pool filled with Jell-O (or lemonade or orange soda or anything else delicious), you seriously missed out on some prime-time imagination — but 39-year-old Mark Rober, a former NASA engineer and BYU alum, is actually LIVING that dream.

You may have heard of Rober before — after all, his YouTube channel has over 7 million subscribers. After one look at any of his videos, it’s obvious why. His channel is dedicated to creative science experiments, including the infamous glitter bomb he showcased in December 2018.

A little background if you’ve never heard about Rober’s glitter bomb experiment: Rober was sick of having packages stolen off of his front porch, so in an effort to teach the thieves a lesson, he set out a decoy package that was actually filled with ultra-fine glitter. When the thief opened the package (which Rober put a camera in), the glitter “bomb” detonated all over them. It was hilariously satisfying, so it was no surprise when the video immediately went viral.

But that was more than six months ago and, as any dedicated scientist would, Rober’s been cooking up new mischief to bless the world with since. One of his latest amazing scientific experiments? The world’s largest jello pool.

According to the video on his YouTube channel, Rober has been wondering for several years whether someone could actually swim in Jell-O. So after several months of planning and a ton of effort involving several propane tanks to heat the Jell-O, figuring out the exact right location and time of year to perform the experiment, and using a large swamp cooler to then cool the jello, his Jell-O pool came to life.

“I wasn’t feeling super confident because my speciality is more with mechanical things and this project was more about chemistry and thermodynamics,” Rober explains in the video. But in spite of his fears, the experiment worked — and was now ready to be tested.

Early in the morning, a few kids from around the neighborhood came to test out the pool by christening it with a belly flop. But actual swimming didn’t really take place — they mostly rolled around the top because the jello layers underneath were too firm. So Rober decided to test it out a little later in the day.

“When I first got in myself, it was closer to the middle of the day and one of the things we discovered was that direct sunlight over time had the effect of undoing some of the solidness of the lower layers,” Rober explained.

When he got in, he sank under the Jell-O and came back up laughing, covered head to toe in flecks of red jello.

“When you go in, it just like, fills your nose and ears. It’s a very surreal feeling . . .  It’s kind of hard to move, but it’s just slimy and slippery. It actually feels really cool,” he said.

After he dove back under to find the pool toys they’d hidden in the pool prior to the experiment, he joked, “It’s like swimming in snot, if that makes sense… But like, a good snot.”

Whether it feels good or bad to swim in gallons upon gallons of cherry Jell-O, one thing is for sure: Rober’s YouTube page is never boring… And he always leaves us wondering what amazing experiment he’ll pull off next.