In June 2014, Kelly’s local ward leaders in Virginia held a disciplinary council which resulted in the excommunication of Kelly from The Church of Jesus Christ of Latter-day Saints. Local leaders determined that Kelly, who now lives in Kenya, was guilty of apostasy due to repeated public advocacy of ideas contrary to gospel doctrine.

In support of his wife, Kelly’s husband, Neil Ransom, plans to remove his name from Church membership records, according to the Salt Lake Tribune. Ordain Women posted an article to their site explaining Kelly’s reaction to the rejected appeal. Kelly stated that she is disappointed with the outcome, but that she is not surprised. She explained,

I am proud of what I have done. I am proud of the women and men who have taken a stand with me in this struggle for gender justice. We will continue to act with integrity and courage.

Upon Kelly’s excommunication last summer, her Bishop in Virginia informed her of the following: “In order to be considered for readmission to the Church, you will need to demonstrate over a period of time that you have stopped teachings and actions that undermine the Church, its leaders, and the doctrine of the priesthood. You must be truthful in your communications with others regarding matters that involve your priesthood leaders, including the administration of Church discipline, and you must stop trying to gain a following for yourself or your cause and taking actions that could lead others away from the Church.”

Kelly claims that the legitimate concerns of LDS women cannot continue to be ignored or dismissed any more.

To learn more about Church disciplinary councils and the process of repentance and reinstatement visit LDS.org.

Ted Bundy and the Truth About His Church Membership 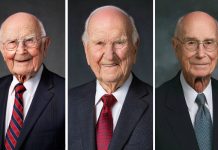 I Age-ified the Apostles and First Presidency, and Somehow They’re Even More Adorable