If you thought you’d heard the last of Kenny Holland (“Saturday’s Warrior”), think again. This LDS pop star is rapidly rising in fame with the release of his new album, B.O.A.T.S., and the nation-wide tour that his fans have been waiting for.

Kenny Holland started his music career as a child in Phoenix, Arizona. He was already performing by the age of eight, and by sixteen he was selling out high school auditoriums. He released his first solo album, “Hearts & Keys,” in 2012, and paired it with his covers on Vine to broaden his already-growing fanbase. “Saturday’s Warrior” is his first acting role, and he hopes, not his last, but music continues to be his true passion.

Kenny’s first album feels like fun-filled summers and endless glasses of lemonade (seriously, that’s the name of one of his songs). But B.O.A.T.S. has a powerful and unexpected depth, thanks to his edgy melodies and his thought-provoking lyrics, which will keep listeners looping his songs.

Before he runs off to L.A. to start his tour, Kenny gave us a quick look at his newest album and what fans can expect from his tour.

LDS.net: What was your main inspiration as you created your new album?

Kenny: Throughout the writing process of B.O.A.T.S., I was trying to find a way to get my perspectives and opinions across in a sort of puzzling way that would take some careful thought and dissecting. I found a lot of connection between the ocean and what I wanted to portray in the music, so I received a lot of inspiration for this record at the beach.

LDS.net: Do you have a favorite song from your new album?

Kenny: My personal favorite song from the album is the seventh and final song in the story, titled “Shabby Shoe Chandler.” It’s really the moral of [my album’s] story and, in my opinion, has the most depth in the music and lyrics.

LDS.net: If you could dedicate this album to anyone, who would that be?

Kenny: If I could dedicate this album to anyone it would be to a few different people. My family, on one hand, as they are mentioned in certain lyrics throughout the album, and my fans on the other hand. But really just to anyone who’s seeking for something more or chasing their purpose.

LDS.net: What can your fans look forward to as they attend the tour? (Any fun surprises or elements you’d like to hint at?)

Kenny: There will be a few surprises on this tour. Fans can expect some special guests along with a deeper look into the story of B.O.A.T.S..

We’re thrilled for the release of Kenny’s new album, and we wish him all the best on his tour! See below for details and visit kennyholland.com/tour for tickets. 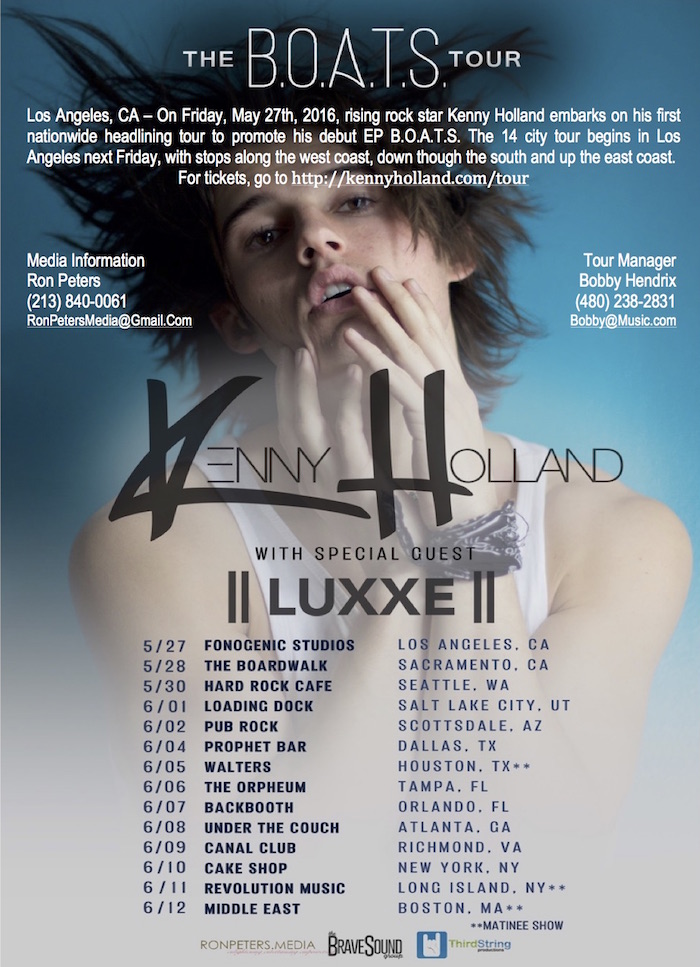