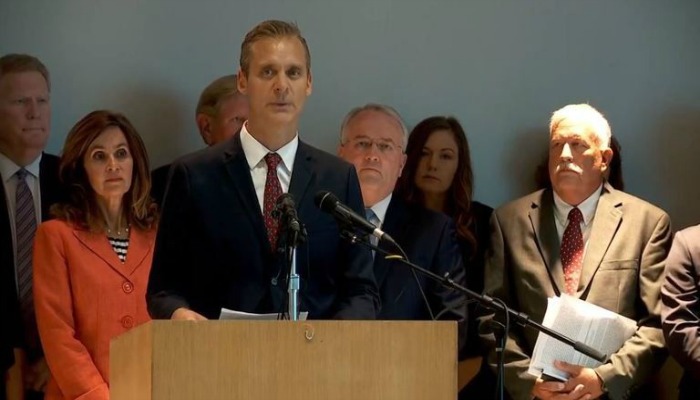 Earlier Thursday, The Church of Jesus Christ of Latter-day Saints joined a vast array of medical professionals and others to oppose Utah’s “Medical Marijuana Initiative,” or Proposition 2.

Come November, Utah ballots will request citizens’ votes on the legalization of medical marijuana. This is known as the “Medical Marijuana Initiative,” or Proposition 2. The Church’s issue with Proposition 2 isn’t the use of medical marijuana — it’s the parameters in which the drug is used, according to member of the Seventy Elder Jack N. Gerard during the press event held today at the Utah State Capital.

“The Church does not object to the medicinal use of marijuana, if doctor-prescribed, in dosage form from a licensed pharmacy,” Elder Gerard said.

Elder Gerard united his voice with Utah Medical Association’s Michelle McOmber, who explained the need for “proper safeguards” in relation to a patient’s use of medical marijuana.

“We are firmly opposed to Proposition 2,” McOmber said. “However, we do not object to marijuana derivatives being used in medicinal form — so long as appropriate controls and safeguards are in place to ensure vulnerable populations are protected and access is limited to truly medicinal purposes.”

Gerard further explained that the initiative “goes too far” and that the Church is “deeply concerned” by its lack of structure and control. Mormon Newsroom further echoes this sentiment in its news release, stating, “… initiatives to legalize marijuana in other states have led to increased drug use among youth, higher risk of impaired driving, and an increase in hospital emergency department visits, among other significant public health and safety concerns.”

“The marijuana initiative appearing as Proposition 2 on the ballot this November does not strike the appropriate balance in ensuring safe and reasonable access for patients while also protecting youth and preventing other societal harms.”

This decision isn’t one that was made lightly; in fact, the Church released a statement in May regarding the issue and its legal team’s in-depth look into the proposition’s safety. Results from the legal team’s analysis concluded that Proposition 2 had the potential to do more harm than good, encouraging recreational use of the drug rather than using it strictly in the parameters set by medical professionals.

Ultimately, the Church has encouraged its members and all Utahns to stand against the initiative, instead focusing on solutions that will benefit all citizens and promote safe and effective use of medical marijuana.