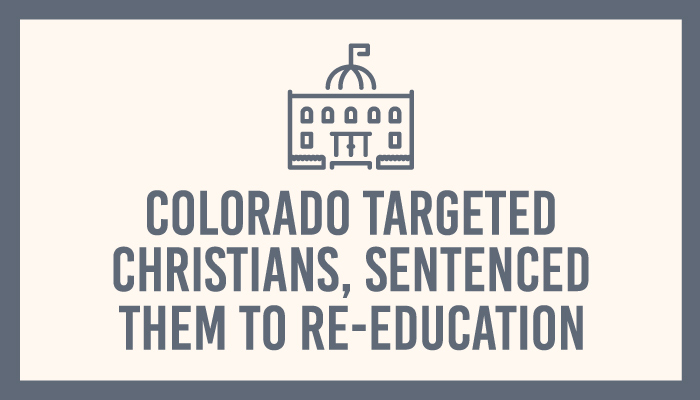 An Evangelical Christian, Jack Phillips, ran his bakery based on his Christian beliefs of hard work, honesty, and service, while not celebrating sin like divorce, alcoholism, or pre-marital sex.

In 2012, Colorado prosecuted him for declining to celebrate a same-sex wedding and sentenced him to undergo trainings designed to change those religious beliefs. Phillips appealed his case, Masterpiece Cakeshop, Ltd v. Colorado Civil Rights Commission, to the Supreme Court. He believes Colorado’s actions violated his freedom of religion.

This article is part two of a five-part series examining the many questions the case presents. This article asks whether coercing a baker to create a same-sex wedding cake violates his religious freedom.

This article looks at four questions:

“Religion isn’t an Excuse to Break the Law”

Some people conclude that this is a case of a religious person thinking he’s above the law.

Phillips, however, only wants the same freedom to think and practice his religious beliefs that all Americans both religious and irreligious share. For example, a pacifist who can legally get an exemption from the draft. Religion rarely provides an exemption to the law, but one purpose of this case is to see if this is one of those rare times.

In early America, laws targeted the religious practices of Quakers and Reformed Baptists. “The Free Exercise of Religion” clause prevents these types of laws by making those rare religious exceptions.

So those who say that religion isn’t an excuse for breaking the law are correct in general but are ignoring that the purpose of this case is to determine if this is one of the rare but crucial exceptions.

Today, if a law forces someone to violate their religion, the Supreme Court will look at a list of requirements to see whether or not that person still needs to follow it. There are two possible sets of requirements a law might need to pass. Let’s look at each of them and if they should apply here. 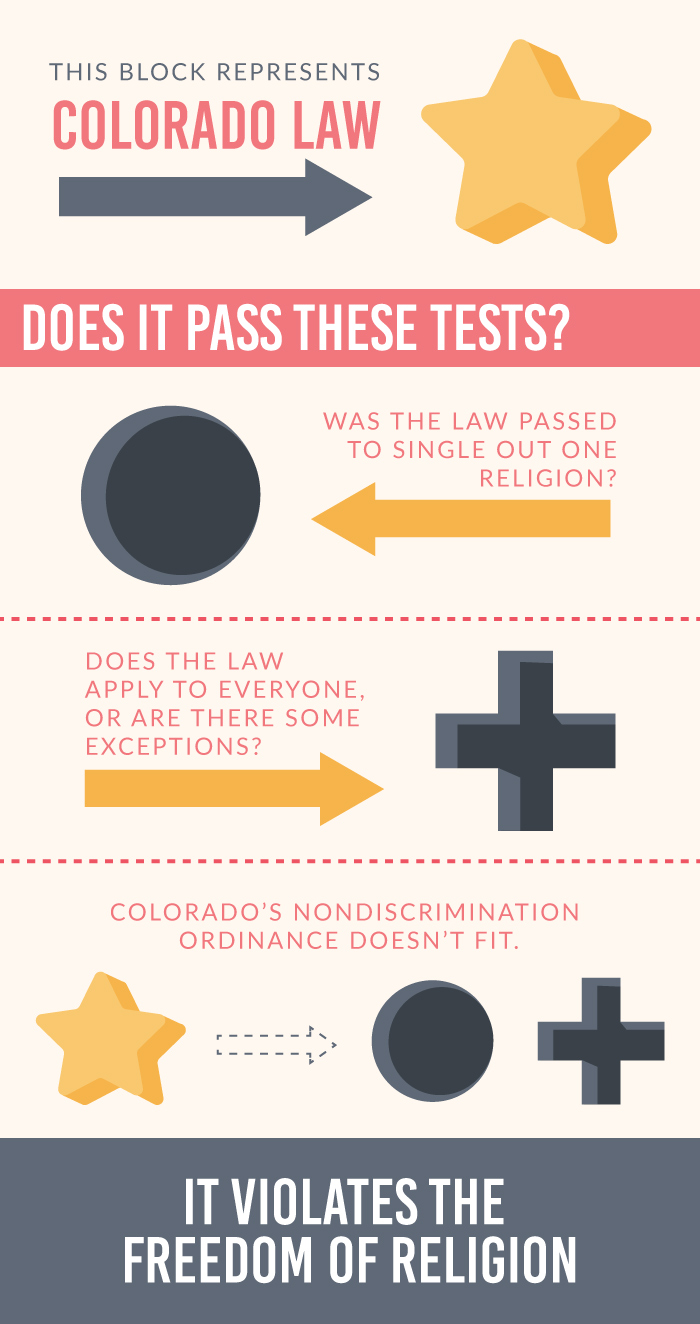 In 1990 the Supreme Court made it easier for the government to force you to violate your religion. While some states have passed laws reversing the decision, Colorado is not one of them. So the easier requirements are the default.

In Colorado and states like it, laws that restrict religious freedom need to meet two requirements.

The 1992 case Church of Lukumi v. City of Hialeah is the only example of the Supreme Court applying this test.

A church leased property in Hialeah, Florida. Their religion sacrifices chickens. The city council then passed a law banning the sacrifice of animals. Just like Colorado has claimed in this case, the city of Hialeah claimed the law was not passed to single out a specific religious group. They claimed the law was for the public health and safety of the community.

The Supreme Court saw through their claim, however, by looking at two factors:

We can evaluate Colorado’s claim using the same pattern.

Colorado followed through and passed the law.

Since then, Colorado has made many exceptions to the law. When Evangelicals have gone into bakeries asking for cake designs intrinsic to their faith (which is protected by Colorado’s law) such as bible verses, Colorado has told LGBT+ bakers they do not need to make those cakes because they find them offensive.

We can also see that Colorado’s law targets religious belief because the penalty for violating the law is having to sit in a “sensitivity training” aimed at changing those religious beliefs.

One of the Commissioners on Colorado’s Civil Rights Commission confessed this bias during Phillips’ case, “Religion has been used to justify all kinds of discrimination throughout history. . . . To me it is one of the most despicable pieces of rhetoric that people can use.”

While the easier requirements are the default, there are still circumstances when a law must pass the strict scrutiny requirements.

The last is entirely up to the Supreme Court’s discretion. But because the other two clearly apply in this case, the strict scrutiny requirements need to be met.

There are two strict scrutiny requirements:

What could the compelling purpose be? Avoiding offense, ensuring LGBT+ individuals have access to wedding services, perhaps. There are a few possibilities, but none that stand out as clearly necessary.

Not insulting the dignity of LGBT+ Americans is probably the most compelling, but forcing someone to violate their conscience to make a living is pretty insulting too.

It could have written this law in dozens of ways that would avoid offense or ensure the availability of wedding goods while still protecting the religious freedom of its citizens. But Colorado didn’t.

In fact, we know there are other ways to accomplish this purpose since nineteen states wrote a letter to the Supreme Court listing many of those ways.

Is Phillips Pushing His Religion on Others?

One common claim is that Phillips pushed his religion on others by refusing to make the cake. But in this case, it’s Colorado that is guilty of pushing a religious belief.

Because the government can’t tell individuals how they should answer the religious question of same-sex marriage for themselves, US churches that believed in same-sex weddings were free to perform them even before the government recognized them.

Why Shouldn’t Colorado Push the Belief that Same-Sex Marriage is Valid?

If Colorado requires its citizens to participate in a religiously significant ceremony like a wedding, it is illegally establishing a religion, even if the reason for requiring participation is something irreligious like equality.

In 1989, for example, a high school principal invited a rabbi to deliver a non-denominational prayer at graduation. Like Colorado, his motivations weren’t religious, going so far as giving the rabbi advice on how to give an appropriately neutral prayer for a civic occasion. Still, one couple sued over having to hear the prayer. The Supreme Court agreed that because the school “in effect required participation in a religious exercise” they violated the couple’s religious freedom.

The case concluded, “It is beyond dispute that, at a minimum, the Constitution guarantees that government may not coerce anyone to support or participate in religion or its exercise” (emphasis added). Anyone includes people who own a business, a question we’ll explore further in the fourth article.

Since Colorado has also chosen to not coerce LGBT+ bakers to celebrate the opposing religious belief about same-sex marriage, Colorado has not only illegally forced participation in religion, but illegally chosen a side in a religious dispute.

The Supreme Court tried to warn states like Colorado of this overreach, “It must be emphasized that religions, and those who adhere to religious doctrines, may continue to advocate with utmost, sincere conviction that, by divine precepts, same-sex marriage should not be condoned.” Had they heeded this warning, they would not have so clearly violated Phillips’ freedom of religion.

Can a baker who belongs to the Jehovah’s Witness faith who is happy to bake for and serve Jews be compelled to bake a cake for a bar mitzvah? Many Jehovah’s Witnesses believe they are specifically forbidden from participating in or even attending the religious ceremonies of other faiths.

Thanks to the commenter Kullervo at “By Common Consent” for inspiring this hypothetical.

Check back tomorrow for our third article that looks at whether or not free speech claims apply in this case.