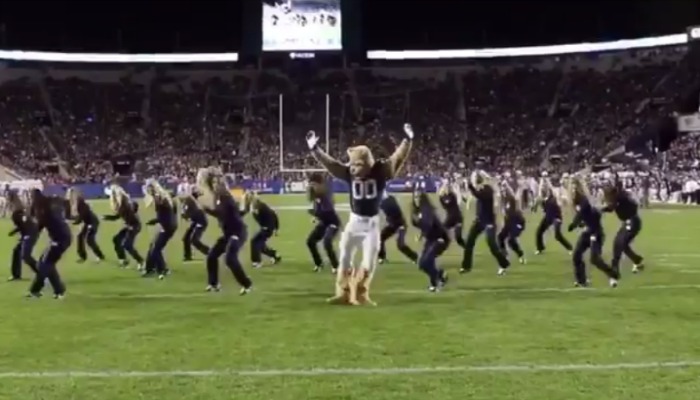 Brigham Young University’s Cosmo the Cougar and the Cougarettes are making national headlines with their latest performance during last week’s football game against Boise State.

BYU football left the game with a loss, but the halftime performance has since gone viral with several million views. Watch the video below:

Really need to know who this cougar is pic.twitter.com/7gqzdzIVb2

Cosmo joined the Cougarettes for their performance of “Rolex” by Ayo and Teo. According to CBS in Los Angeles (see Tweet below), the team has not released the identity of the person behind Cosmo’s moves. We only know that it’s a male senior at BYU. Here are just a few reactions from the Twittersphere that helped the video go viral:

CBS was all over this story

WATCH: @BYU’s Cosmo the Cougar mascot has some moves! Check out what happens when he joined @CougarettesBYU at their homecoming game. 🕺🏈💃 pic.twitter.com/zmJLs4SAxA

This is the greatest mascot dance of all time https://t.co/lpRvAnbllZ

Bleacher Report is kind of a big deal

.@BYUCougars' Cosmo the Cougar has some halftime moves that will absolutely destroy you: https://t.co/5vzejNov0R (📷 via Instagram) pic.twitter.com/rjScnl3phH

It’s been a rough season for BYU, but at least we’ve got Cosmo and the Cougarettes

Even the world of dance acknowledges Cosmo’s skill

This mascot dances better than all of us and we're not even mad about it.

CBS in L.A. even picked it up—no word yet on who is behind the Cosmo mask

BYU mascot's dance moves has everyone asking — who is that man in the cougar mask? pic.twitter.com/HxfQkZfaL1

And of course, Utah’s own KSL

The play of the game between BYU and Boise State belongs to Cosmo and the @CougarettesBYU @BYUCougar @KSL5TV pic.twitter.com/jzmb3AO2q1

But it’s not the first time Cosmo and the Cougarettes have put on a performance like this. Last year this video went viral with more than two million views:

Needless to say, Cosmo and the Cougarettes have some serious moves.