South Dakota’s Pine Ridge Reservation was in desperate straits. The Oglala Lakota Sioux Native Americans suffered under conditions that the average American can’t comprehend. In fact, you’d have to travel outside of the United States, to a Third World Country, to see anything similar. Twila True of the Lakota Sioux sums up the situation via Deseret News:

“If Pine Ridge were a country it would be the poorest in the world.”

If that doesn’t rock your world, then maybe these sobering statistics will.

If it wasn’t for Twila True’s dedication to her people and a connection with some loving Mormons, the situation might not have changed—at least for the good.

However, the LDS Church didn’t just come in with gifts of food and clothing and move on. The Church believes in self-reliance as does Twila True and her supporters. The answer was a self-sustaining thrift store, set up and stocked by the Church’s Deseret Industries. Now the reservation not only has an inexpensive source for everyday necessities—things that residents couldn’t find on the reservation—but a needed employer for the community.

Twila True hopes that this important step and her True Sioux Hope organization can help pull her people into the modern era and serve as a beacon of hope for other reservations. 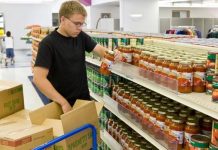