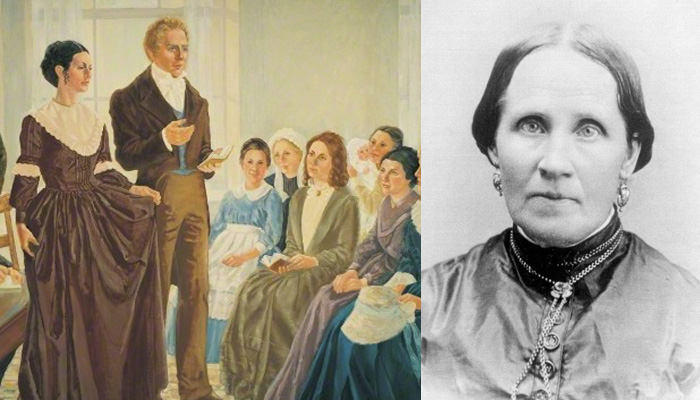 Most Church members know that Joseph Smith practiced polygamy. Historians suggest he was sealed to between 30 and 40 wives, which is a staggering amount when you think about it. But what many members don’t realize is that not all of these sealings were what we would consider marriages in the traditional sense.

It might help to consider what type of behavior would constitute a marriage in the 19th century. Typically a married couple would live together. The husband would be responsible for the financial needs of the family, and the wife would manage the household. There would also be conjugal relations that would likely result in children.

Of the plural wives Joseph Smith was sealed to, he only lived in the same household with a few of them in 1843 and 1844, despite taking his first plural wife in 1841.

Joseph always struggled to make a living. For most of his adult life, he lived on the generosity of others. So how could he take care of all the financial needs of maintaining up to 40 plural wives?

The answer is that in most cases he didn’t. While he made sure that all of his wives had a roof over their head and food on the table, he wasn’t always the one providing the roof and the necessities of life. A few of his plural wives, like Eliza R. Snow, were self-sufficient, but others stayed with family members or friends.

And what about children? We know from affidavits recorded in the Utah territories, biographies written later in life by Nauvoo polygamists, and through trial testimony, that Joseph did have conjugal relations with some of his plural wives from 1841–1844. What we haven’t figured out is why Joseph Smith and his plural wives didn’t have any children — at least that we can identify.

Some of the women Joseph was sealed to had legal husbands. He didn’t live with them, take care of their needs, nor, as far as we can tell, have conjugal relations with them. These unions don’t appear like what we would consider a marriage, so what exactly was the Prophet’s relationship with these women?

Today we use the terms “temple marriage” and “sealing” as synonyms. But the temple sealing ceremony actually contains two parts: first, a couple is married for time and eternity; second, blessings are sealed upon the couple, conditional upon their righteousness. It is not incorrect to equate the two, but it is important to distinguish that two things are occurring in the ceremony. The couple is legally married in this life and is promised that the marriage will also exist in eternity, which will bring blessings to them in the eternities.

In the early days of the Church, there was another type of sealing allowed. A woman could be sealed, or married, for eternity only, meaning just for the next life. The woman would be married to her legal husband during mortality, but not for eternity. After the resurrection, the plural wife would become the wife, or be married, to whomever she was sealed to for eternity.

Up to a third of Joseph Smith’s plural wives were legally married when they were sealed to Joseph Smith. But does that mean that he was married to them? We would need to look closely at their relationships to determine whether these were time-and-eternity marriages or connections formed just for the next life.

When the Saints were living in Nauvoo, they were afraid to talk openly about polygamy and didn’t write about it in their journals until much later in life, when they were living in the Utah territories. We have to look carefully at the remembrances to figure out what may have been going on in these plural sealings.

While looking at the records, we need to remember that the Nauvoo Saints are what we consider “millenarians,” which means they thought the Second Coming was just around the corner. They were anxious to seize the blessings promised to those sealed to an eternal spouse.

We know that some of the legally married women Joseph Smith was sealed to were married to husbands who were non-members. The women would not be able to be sealed to their husbands, so they chose to be sealed, or married, to Joseph in the eternities. These women might have been anxious to tap into eternal blessings if their earthly husbands were unwilling to join the Church.

But other women sealed to the Prophet had faithful husbands. We don’t know why Joseph chose to be sealed to these women, because he left no statements clarifying his intentions, but many have speculated.

If Joseph had treated these sealing ceremonies as marriages by living with these women in the same household, providing for their needs, and having conjugal relations with them, then this would be considered polyandry.

The woman would have two husbands at the same time. This is not only a marital dynamic disallowed by all mainstream religions but also one condemned in D&C 132, the revelation on celestial and plural marriage. LDS leaders, both male and female, also uniformly denounced polyandry during the Nauvoo and Utah periods, when polygamy was practiced.

Many historians in the past have assumed that these sealings to civilly married women were marriages in the traditional sense, while admitting that Joseph didn’t live with any of these plural wives or provide for their needs. They propose that he did have sexual relations with these women.

Other people don’t know what to think and are simply puzzled by this behavior.

Since none of those privy to these sealings left a record accusing Joseph of having conjugal relations with these women, historians have pointed to potential offspring from the relationships to prove their hypothesis.

In the past, writers have promoted the idea that Joseph had children with civilly married women by pointing to resemblances in appearance between portraits of the Prophet and photos of the supposed children.

In the modern age, we have more scientific tools at our disposal. Since the early 2000s, DNA kits have been available to the public and been used in paternity cases. When father, mother, and child are all living, scientists can determine with accuracy DNA connections. When the supposed parents and offspring are dead, the task is more difficult.

Dr. Ugo A. Perego, a geneticist, began working on Joseph Smith’s genealogy about 15 years ago. By 2010, he had used genetic testing to rule out the Prophet’s parentage of 7 boys that were born to legally married women to whom he was sealed.

There was one potential offspring that he could not rule out: Josephine Lyon. Because she was female and didn’t possess a Y chromosome, the same DNA tests wouldn’t work to identify her father.

In June 2015, the descendants of Josephine Lyon contacted Dr. Perego and requested that he once again test for paternity using advanced technology. With their cooperation, he again oversaw testing. This time the results were conclusive: Joseph Smith was not the father of Josephine. Windsor Lyon, her mother’s legal husband, was her father.

What Does This New Research Mean?

Of all of the children reportedly born to Joseph Smith and a plural wife, Josephine was considered by many researchers to be the most likely. That she is not Joseph’s daughter and that no children have been documented by DNA or other evidences to be his offspring, suggests that sexual relations were not a common occurrence in the Prophet’s plural unions.

Perhaps more importantly, Josephine is clearly not the product of a polyandrous marriage even though her mother was sealed to Joseph Smith at the time she gave birth to Josephine. This information suggests that a reassessment should be made regarding the claims made by previous generations of scholars that Joseph participated in polyandry.

While many historical details are still missing, records we now have support that all sealings to legally married women were sealings for eternity only and did not include an earthly marriage with conjugal relations. New evidence may surface in the future that will change our conclusions, but this new puzzle piece helps us better understand Joseph Smith’s plural marriages.