Buzz LDS News Elder Hales Hospitalized; He and Pres. Monson Will Not Participate In General... 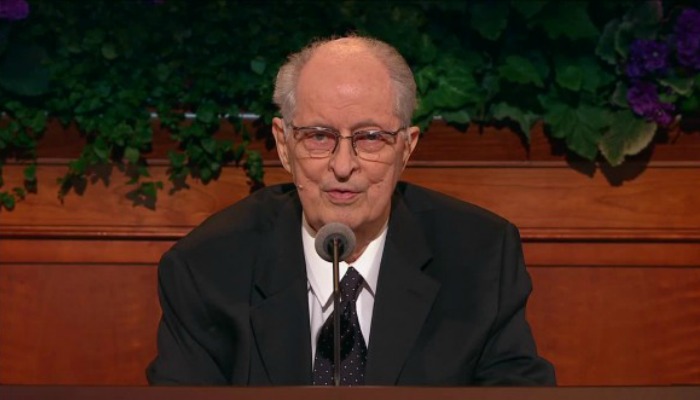 Thursday, September 28, 85-year-old apostle, Robert D. Hales, has been hospitalized and will not be attending the Church’s semi-annual General Conference.

According to Church spokesmen Erik Hawkins, Elder Hales,  “was admitted to the hospital several days ago for treatment of pulmonary and other conditions. To permit their continued medical attention to Elder Hales, his doctors have determined that he should not participate in the church’s General Conference this weekend.”

This will be the second conference Elder Hales has missed due to health complications; the first being in April 2011. After Elder Hales participated in the October 2011 session of General Conference, the Church issued the following statement regarding his health,

“Many members of the church have expressed concern and interest in Elder Robert D. Hales of the Quorum of the Twelve Apostles. Elder Hales suffered health challenges earlier this year that affected his mobility and endurance. As a result, he was not able to speak in the April 2011 general conference. His presence at the October general conference is an indication of the improvement he has made since the problems arose.”

“Elder Hales said, ‘I continue to work with doctors and physical therapists to regain my strength. I am grateful for the faith and prayers that made it possible for me to participate in general conference and resume my responsibilities. I am touched by the many kind expressions of love and support shown to me and for your continued prayers.’

“As he so powerfully taught in general conference, Elder Hales continues to wait upon the Lord as he confronts this health challenge.”

Elder Robert D. Hales was first ordained a member of the Quorum of the Twelve Apostles on April 2, 1994. He served as Presiding Bishop of the Church from 1985 until he was called to the Twelve.

Elder Hales last participated in General Conference in April of 2017, where he gave the address, Becoming a Disciple of Our Lord Jesus Christ.

The Church has just confirmed that President Monson also will not attend the conference sessions.