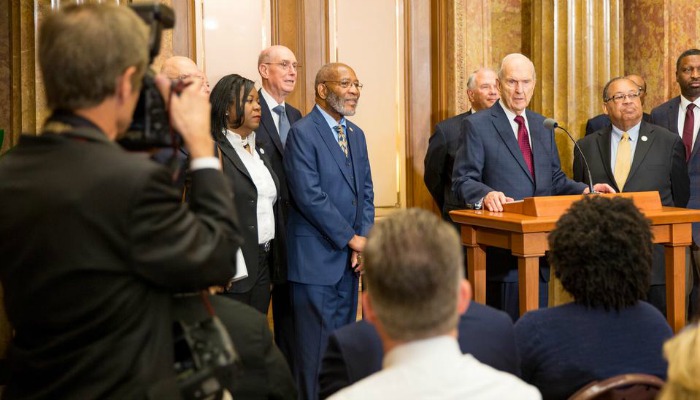 A favorable milestone in the LDS Church’s history was inaccurately depicted recently when a fake news article and fraudulent statement went viral. The website, modeled after the real Mormon Newsroom website and claiming to be the “official pasquinade newsroom of The Church of Jesus Christ of Latter-day Saints,” featured an article entitled “President Nelson Meets With NAACP; Offers Apology For History of Racism.” The falsified statement that was nearly four pages in length, included a fabricated apology offered by President Nelson and the General Authorities of the Church for a history of racism in the Church.

Though the exact source of the website is unknown, the site was built in Toronto, Canada, and was registered just a few days before the article was posted. The statement and the site were unfortunate attempts at diminishing the remarkable events that truly transpired between the LDS Church and the NAACP this week, and the inspiring statements that were actually made.

In a unified effort to promote racial harmony and respect, the First Presidency of The Church of Jesus Christ Of Latter-day Saints joined leaders of the National Association for the Advancement of Colored People for a media conference at the Church Administration Building in Salt Lake City, Utah. The leaders of both organizations stood together in a global call to end prejudice and “demonstrate greater civility” towards one another.

In his remarks, President Nelson expounded upon the cardinal belief of the Church that all people are children of God and, by virtue of this, brothers and sisters. He said, “All human beings—male and female—are created in the image of God. Each is a beloved spirit son or daughter of heavenly parents, and, as such, each has a divine nature and destiny.”

President Nelson stated that working together to lift and serve those in need, epitomizes Christ’s teachings found in Doctrine and Covenants 38:27: “I say unto you, be one; and if ye are not one ye are not mine.”

Derrick Johnson, President and CEO of the NAACP, followed with his organization’s statement. He commended the LDS church for their optimism and mentioned the NAACP’s common conviction that all people, including governments and organizations, “should come together to work through how to secure peace and happiness for all God’s children.”

President Nelson, along with his two counselors in the Church’s First Presidency, met with Derrick Johnson and several of the NAACP’s national board members Thursday morning to explore possible collaborations in future education and humanitarian service endeavors.

They encouraged all through their statements, to work together on this universal goal of goodwill; to focus on areas that we have in common, and to labor in fellowship one with another in order to obtain the “respect, regard and blessings that God seeks for all of His children.”

Though the distraction of the counterfeit website and news article put a bit of a damper on an otherwise uplifting occasion, it is helpful to remember the account in 2 Nephi 2:11, which reminds us that there must be opposition in all things.

There must be bad news in order for there to be good, and the adversary will stop at nothing to prevent the good news of The Gospel (both figuratively and literally), from spreading forth.

Despite his vain attempts, however cunning they may be, it is wonderful to know that people and organizations all over the world, along with The Church of Jesus Christ of Latter-day Saints, are pressing forward in hope and working together in good faith to bring joy to all of God’s children.