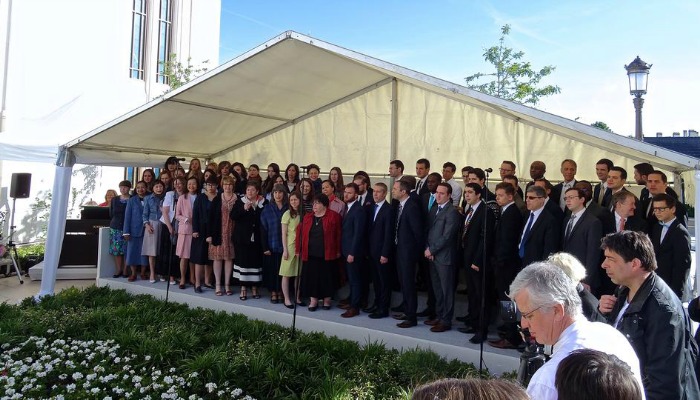 The Paris France Temple was dedicated this past Sunday, May 21st.

Nearly 170 years ago, the first LDS missionaries made their way to France, and only a few years later the first French edition of the Book of Mormon was printed.

But Church membership in France was slow growing. By 1955, when the Mormon Tabernacle Choir made its historic European tour, a mere 1,500 Latter-day Saints called France home.

In a 1976 address President Spencer W. Kimball promised French members, if “[they] clenched our fists and ground our teeth, a temple will be available to the members here.”

Now, four decades after that meeting, the hard-work of members and missionaries across France has paid off. France boasts over 30,000 members, 108 congregations, 67 family history centers, and now, one brand new temple.

President Eyring, first counselor in the First Presidency, dedicated the Paris France Temple. He was joined by Elder Neil L. Andersen of the Quorum of the Twelve Apostles, Elder Larry Y. Wilson, executive director of the Temple Department, Elder Paul V. Johnson, president of the Church’s Europe Area, and the Presiding Bishop of the Church, Gerald Causse.

“We rejoice with the saints of France and surrounding countries that today a holy house of God is dedicated in your midst — adding an eternal dimension to the beauty of this great and historic part of the Lord’s kingdom,”  remarked President Eyring.

During the three week open house prior to its dedication, over 47,500 visitors toured the Paris France Temple. The spirit felt there was reportedly immense.

Christophe Mortier, a member of the Paris France Temple Committee, compiled 800 testimonies to be placed inside the cornerstone of the temple, stories“of faith, of courage, of sacrifice,” he told Deseret News. “When we made the compilation, we understood why we have a temple here in France.”

Plans to build the Paris Temple were announced on July 15, 2011, by President Thomas S. Monson.