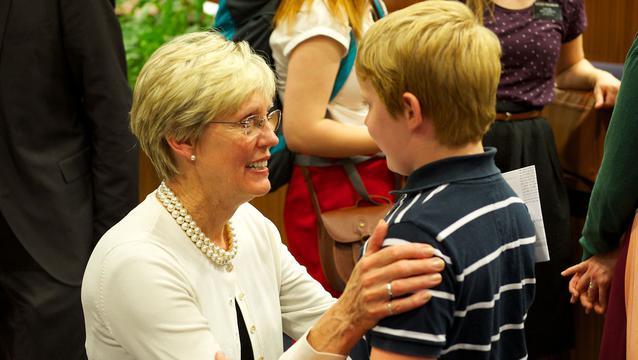 Relief Society and Primary leaders, Sister Rosemary M. Wixom, and Sister Linda S. Reeves, recently traveled to Europe to meet with members and leaders of The Church of Jesus Christ of Latter-day Saints, as well as media in the Czech Republic and Portugal. They visited Austria, Cape Verde, Czech Republic, Germany, Ireland, Northern Ireland, Portugal and Slovakia from 27 May through 7 June 2014.

The purpose of the visit was to meet the members of the various countries and get to to know their needs and the problems they are facing.

Both Sister Reeves and Sister Wixom had a central focus on love while traveling around Europe and visiting Saints where the Church has few members.

“I want children to know and understand that they are loved by Heavenly Father and His Son, Jesus Christ, and that when we follow Jesus Christ we find great happiness,” Sister Wixom said.

The Relief Society of The Church of Jesus Christ of Latter-day Saints is one of the oldest and largest women’s organization in the world and Sister Reeves has been in the presidency since 2012 . The Primary Organization was implemented Church-wide in 1880 and is for children ages 18 months to 12 years old. Sister Wixom has been president of that organization since 2010.

The Church released a video of their visit that you can view at mormonnewsroom.org.