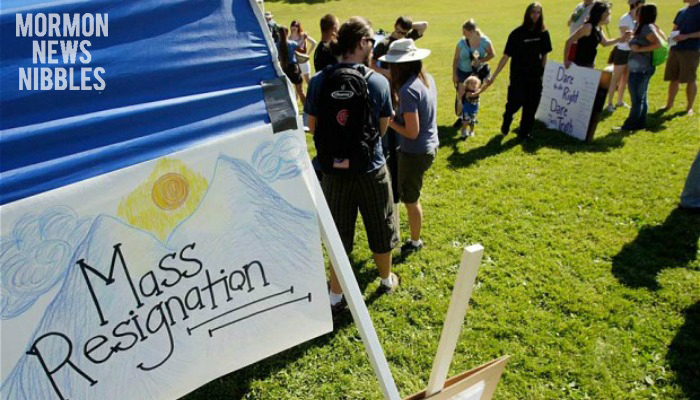 Mass ‘Mormon Exodus’ Not So Massive

Resignations are held in formal, celebration-like gatherings, with disaffected members ceremoniously handing in their papers requesting their names be wiped from LDS Church records. Photos of the crowds at these ordeals paint a picture of a suffering Church, whose members are fleeing faster than sheep at a haggis convention.

But the media isn’t painting the full picture. According to an article published in the Salt Lake Tribune, the LDS Church acknowledges “periodic increases or decreases in [such] requests” but “the number of people asking to have their names removed from the records of the Church has been less than one-tenth of 1 percent (less than 1 in 1,000) for more than 20 consecutive years, including in 2015 and the first eight months of 2016.”

These numbers do not discount the 70% of inactive members who make up the Mormon population, according to independent Mormon demographer Matt Martinich. Still, congregational growth rates remain stable — even increasing slightly.

Even those who have resigned completely are not without hope. A Mormon father in Centerville shares his story with the Salt Lake Tribune, expressing his empathy for those who are handing in their papers. He has been excommunicated and re-baptized twice.

Baptists And Mormons Work Together To Educate Youth

“These days you want a good job, you want to live well, you need an education. And unfortunately too many of our children in the African American community are not getting an education.”

About 7 years ago Pastor Nicholas created a tutoring program so that young African Americans in his Baptist community might have a greater chance at academic success. Unfortunately, a shortage of tutors seemed like it might shake the program’s efficiency. Enter the Mormons. Latter-day Saints and the Baptist community decided to partner up, investing their time in order to make a difference in the lives of these kids.

The video, posted by LDS Charities, captures what happens when two religions work together for the greater good and demonstrate true understanding for that old Quaker proverb, ““Thee lift me and I’ll lift thee, and we’ll ascend together.”

Recently, the Church released a letter to members in Arizona, California, and Nevada, urging them to vote against recreational marijuana use. But where they stand on medicinal uses of the controversial herb is still up in the air. One Mormon doctor and his brother aim to change that.

When Nathan Frodsham of Murray, Utah, was diagnosed with an advanced degenerative disc disease, his doctor and twin brother Aaron knew the pain would be almost unbearable.

“When I saw the MRI of his neck, I thought, ‘Oh no. This is not good,'” Aaron Frodsham told KSL. “Essentially, it’s bone on bone, and those nerves that are coming out the side are being pinched by those bones.”

While working in Seattle, Nathan’s 60-hour work week became too much to handle on top of his debilitating pain. His doctor in Seattle prescribed him cannabis. He talked to his ward leaders and bishop about the prescription. And was told, “that’s something you can take up with you and your own personal relationship with God.” So Nathan went for it.

The results were amazing. According to Aaron, Nathan had cut back on almost all of his narcotics and was able to sit for 12-hours at his computer, as is necessary for his profession as a data scientist.

But since moving back to Utah, Nathan’s health has deteriorated significantly. An allergy to anti-inflammatory medication makes working difficult.

“Cannabis helps significantly. Probably better than anything I’ve used before.”

Even Nathan’s father has been converted to the cause, after seeing how cannabis had affected his son. “I only knew it in the negative side and always believed it was a drug that was very dangerous, and that it was addicting,” he said.