LDS.net’s Mormon Minute recaps LDS news that happened during the week in the Mormon world. This week, we talk about: the 11 new missions opening in July, the first #LDSDevo of the year, Mia Love, and the British Supreme Court.

The Church has announced eleven new missions that will open beginning July 2015. The list includes two new missions in Orem and Logan, Utah… and the Argentina, Buenos Aires East and Santa Fe missions. The changes come in an effort to accommodate the growing number of missionaries after the 2012 age change announcement. There are now four-hundred and sixteen missions worldwide.

The first worldwide devotional took place at BYU-Idaho this past Sunday and was given by Brother Randall L. Ridd, Second Counselor in the Young Men General Presidency. Elder Ridd encouraged listeners to live life with a clear focus. This was the first of three devotionals that will take place throughout the year.

Mia Love was sworn in to Congress with a very special Bible. Elder Ronald A. Rasband of the First Quorum of the Seventy provided her with a Bible that belonged to Joseph Smith’s mother for the ceremony. Love is the first black republican woman to be sworn into congress.

1:02 – British Columbia Polygamist Groups Banned from Using the Name of the LDS Church 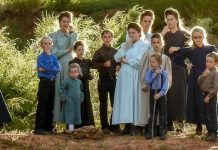