Buzz LDS News Mormons, Marriage and #MeToo: How Do We Respond to Domestic Abuse? 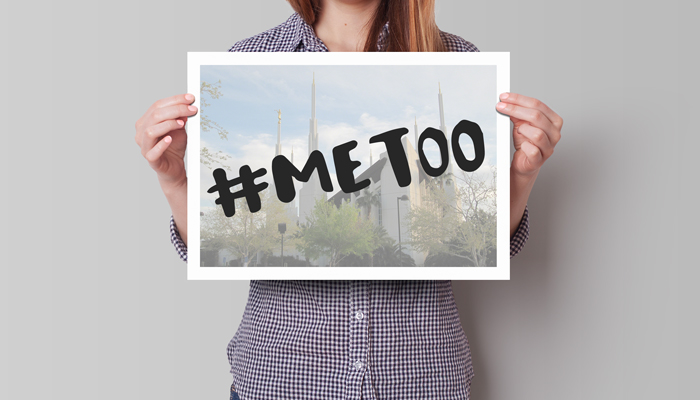 For a group of people who believe that men and women should be accountable for their own sins, and not condemned for the actions of others, it seems like every time a high-profile Mormon goes sloshing in the mud, the rest of us get dirt on our trousers.

Although I think “high profile” is being a bit generous (I’d never heard of him before this and certainly could not pick him out of a police lineup), allegations of spousal abuse by the former White House aide consistently are being accompanied in the media with the observation that he is LDS.  CNN has referred to it as Mormonism’s “#MeToo movement” as the alleged lack of response by Church leaders to complaints of abuse by Porter’s former spouses has come under fire.  We are all being reminded that Mormonism is patriarchal, male-dominated, uncaring about women…we are, in the eyes of some, the Harvey Weinstein of religions.

I don’t know what happened between Porter and his spouses.  Things aren’t looking very good for him, but I wasn’t there.  Nor was I there during any of their counseling sessions with bishops or other priesthood authorities.  But this notion of the Church turning a blind eye to abuse is at odds with what I have observed and experienced in the Church.

When I was the first counselor in our ward’s bishopric, our bishop landed a job out of town and moved away.  But he wasn’t released.  That left me for several months reluctantly coming off the bench to fill in his role while we waited for another bishop to be called.  During that time, a less active woman in our ward whom I didn’t know came to me to talk about her marriage situation.  She was an immigrant, had come to the U.S. from Europe on a spouse visa, and now was stuck in a verbally and physically abusive marriage.

Suggesting to her that she should stay in the marriage never occurred to me.  Creating a new priesthood ordinance of “laying on of the baseball bat” most certainly did.  My first reaction was:  How we get her out of there?  She agreed that she needed to leave, but she was afraid of being beaten up when she tried.  With the help of the Relief Society president and some burly elders with pickups, we made plans to move her out while her husband was at work.  I made arrangements for her to be taken in at a shelter.  All was ready to go, when she decided (like too many abused women) to cancel the plan and stay with her husband.

It was heartbreaking to all of us who were involved in the situation.  I’ve never made contact with her again, and I have wondered about her fate.

The Church’s position on domestic violence is zero tolerance.  Bishops are given guidance on how to report allegations of abuse, and they have access to Church professionals, including attorneys, to help them deal with the situation.

I have never heard anyone in the Church suggest that a person should stay in an abusive relationship in order to preserve the sanctity of marriage.  The marriage covenant is sacred, but not all marriage relationships are celestial.  Divorce might be less common among Mormons than other communities, but that doesn’t make it uncommon.  Our pews are filled with folks who are divorced or are going through divorces.  Divorce might not be the norm, but it is hardly scandalous.  The idea that the Church would encourage someone who is getting knocked around by their husband to stay with the jerk in order to avoid the stigma of divorce is nonsense.

But I recognize that official policy and actual practice can differ.  We have a lay ministry in this church, comprising a wide variety of imperfect men.  We have over 30,000 bishops in the Church and another 3,000 or so stake presidents.  Among those 33,000 people you will find some of the most compassionate, caring and Christ-like people you will ever meet.  You will also find men who are stupid, insensitive, chauvinistic, tone-deaf, and socially awkward.  None of these leaders is perfect, and some of them have sins or imperfections that are going to damage other people.  That isn’t an excuse:  It’s just statistics.  Some will live up to their callings and covenants, and some will fall woefully short.  And, in my humble-ish opinion, any priesthood leader that does turn a blind eye to abuse or enables an abuser should be released from his calling and face disciplinary action.  As they say:  Throw the bums out.

Fortunately, I have not had the misfortune of working with any priesthood leaders that are even remotely tolerant of abuse.  And that’s important to me.  I have five daughters, and I would not want them involved in any organization where I believe they would be marginalized, silenced, or victimized.  I firmly believe that the three pillars of being a good father to daughters are (1) love; (2) respect; and (3) a concealed carry permit.

Before the aforementioned bishop moved away, he asked me to sit in on an interview with a couple that was seeking some counsel.  The reason he asked me to be in there was that the husband was such a chauvinist pig (“chauvinist” was his word; I added “pig” after the interview) that the bishop was having no small struggle trying not to administer a meaningful attitude adjustment to him.  It wasn’t a case of physical abuse; dude just didn’t know how to treat his wife.  But it was offensive to my bishop and it was offensive to me.  That attitude has been pretty much the norm among the priesthood leaders with whom I have served.

Certainly, there are things that the Church can and should do to better train bishops and stake presidents to identify and address these issues.  There is always room for improvement, and this is a critically important issue.  But I don’t think that Mormons live in a culture that turns a blind eye to domestic abuse.  In fact, I’m confident that if there was an announcement in priesthood opening exercises that we were going to go rough up a wife beater, we would get a much better response than we do for home teaching.

The media apparently hold Mormons to a high standard.  If a malfeasant is a Mormon, you’ll know about it.  Despite the dirty cuffs, I’m actually fine with that.  If there is a higher standard, then we should strive to live up to it.  And when someone violates those standards by engaging in domestic abuse, amen to their priesthood and authority.  And if the victim is a member of this Mormon’s family, amen period.