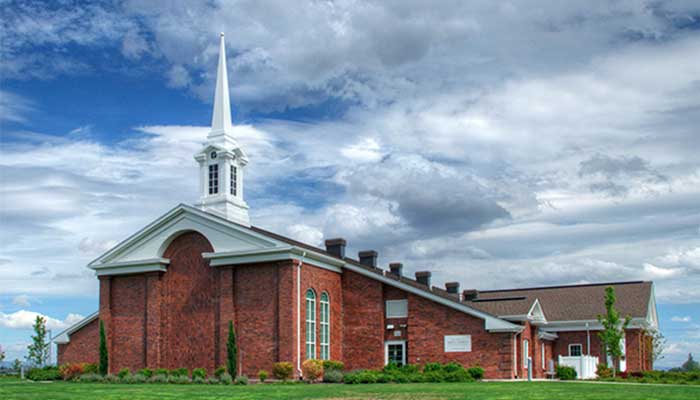 There is a good chance that you’ve recently learned about the Church’s new policies regarding same-sex couples, and read much about it on social media. Mormons and gays has long driven web traffic, so news outlets can be expected to jump on the news, but they should be expected to at least report on the issue accurately and respectfully.

The first change edits the definition of apostasy. The new definition adds that entering a same-sex marriage constitutes apostasy.

The second change requires that for children of same-sex couples to be baptized they must be adults, and specifically reaffirm their testimony of eternal marriage.

Even though these are procedural changes that reaffirm a core doctrine of the Church, the Church’s opponents have wasted little time in beginning their attack. The news, unsurprisingly, was first broken by John Dehlin who makes his living by antagonizing the Church.

There have been many responses to this news, most based on inaccurate headlines, incorrect understandings, or hate mongering of the Church’s opponents.

The most pervasive myth you’ll hear about these changes is that they punish children. All people can receive all the ordinances of salvation and exaltation. And all children can attend all church activities and events. There is no degree of punishment that exists in these new changes.

Children must simply wait until they can legally make their own decision to join the Church, rather than relying on their parent’s approval. While a parent in a same-sex relationship could theoretically approve of their child’s baptism, questioning their motivation to do so would be prudent since they have so prominently rejected the teachings of the Church.

These changes could also help protect children. While some same-sex couples adopt, many children of same-sex couples come from divorce. In these situations, custody battles can be fierce. In most places in the United States, if one parent tries to destroy the relationship of their child with the other parent it is considered “custodial interference” which is grounds to change the custodial agreement.

Because the Church continues to affirm that heterosexual marriage is the ideal, there could potentially be judges in the United States—perhaps, even, very many judges—who would categorize a child joining a church that rejects their parent’s new relationship as custodial interference. This could take that child away from the parent who belongs to the Church or rearrange their custodial arrangements significantly in ways that would harm the child.

All children, of course, continue to be welcome at all church activities, including primary, and Sacrament meeting. And in following the example of the Savior, all children are entitled to blessings of comfort and healing.

There are others who insist that these new changes set sins of homosexuality as more serious than other sins. Again this is not true. Adultery and fornication are both grounds for excommunication. Up until the legalization of same-sex marriage, those who participated in same-sex relationships could receive church discipline under either of these other grounds.

The Church respects the law, and now recognizes same-sex marriages as legal, even if still sinful. Because of this, same-sex relationships could no longer be penalized as fornication requiring their addition to the definition of apostasy. But this change has no effect on how the Church responds to homosexual sins, only how it categorizes them.

As the Church’s website “Mormons and Gays” points out there is much misunderstanding of LDS doctrine on this issue. But the Church continues to affirm that homosexual sex is a sin.

Some have also suggested that requiring the children of LGBT couples to wait until they are adults to be baptized treats those parents worse than parents who are engaging in other types of sins. But this policy is the same that exists for children of polygamous couples, or children of parents opposed to the Church.

So this policy does not carve out special punishments for LGBT parents, but rather extends existing policies to cover their newly legal marriages.

This myth is a common one shared by sofa philosophers critical of the Church’s new decision. The second article of faith reads, “We believe that men will be punished for their own sins and not for Adam’s transgression.”

This myth relies on the first myth that the Church is somehow punishing children of gay Mormons. But it also fundamentally misunderstands the second article of faith. Most other Christian denominations believe that all people are born inherently evil and fallen because of Adam’s sin of eating the forbidden fruit. Latter-day Saints reject this doctrine and believe people are only responsible before God for the sins they themselves commit.

Some opponents of the Church continue to spout this claim even though it is patently false. In order for children of gay Mormon couples to be baptized, they must simply affirm the Church’s teachings about sexuality and marriage. To quote the new handbook change, “The child accepts and is committed to live the teachings and doctrine of the Church, and specifically disavows the practice of same-gender cohabitation and marriage.”

They do not need to say anything about their parents. This is the same standard expected of every convert who has a parent that still smokes when to be baptized they must specifically agree to the word of wisdom. Children in this situation must simply recognize the Church’s teachings on sin.

There are those who believe that identifying a behavior as sinful is equivalent to rejecting the people who engage in that behavior. But those people fundamentally misunderstand Latter-day Saint doctrine about the atonement and identity. Those who perpetuate this myth are often those who believe sexuality is the primary factor in personal identity.

This is a sad myth to have to refute. Unfortunately, “The Salt Lake Tribune” in their irresponsible coverage of this topic repeated this myth in their headline of this story, “New Mormon Policy Makes Apostates of Children from Same-Sex Unions.”

Latter-day Saints strongly believe in the innocence of children, as outlined in Moroni Chapter 8. The new policy recategorizes same-sex marriage as apostasy instead of fornication.

The LDS Church has a very long-standing policy of not allowing children to be baptized without both parents permission. This policy existed, presumably, to prevent families from being destroyed by contention over the issue. The Church in its focus on family would rather children grow up in a stable home environment than be baptized under any circumstances.

This policy is a way of putting the stability of these children’s families first. A goal that presumably most detractors of this policy would laud.

Those responsible for disseminating this myth including the editorial board at “The Salt Lake Tribune” should take steps to fix the damage from their errors.

Myth #6 Church is Depriving Itself of LGBT Members

This myth was started by John Dehlin in his initial post on the matter. He wrote, “it is sad for the LDS church and its devout members — who continue to deprive themselves of the wonderful talents and association with so many beautiful and gifted LGBT members.”

This myth comes from those who essentially do not believe in sin. They believe that our behavior should be dictated by our innermost self and not by God. To these individuals, rejecting a behavior is the same as rejecting an individual. This twisted sense of reality leads to this myth.

God has always had behavioral standards including those for sexual conduct. God’s church would consequently support those standards. Saying that the Church is depriving itself of LGBT members is as foolhardy as saying the Church is depriving itself of cohabitating members, polygamous members, or alcoholic members. Individuals can deprive themselves of the blessings of the Church by refusing to follow the commandments, not the other way around.

Myth #7 This Hurts Me Personally

This comment is most pervasive because it is the most difficult to unravel. This rhetorical approach has become crucial in the campaign to normalize and then legalize same-sex marriage, because we are not accustomed to telling other people their feelings don’t matter.

As a result this myth has become a bludgeon to silence those who believe in right and wrong.

If someone talks about how this hurts them, they may sincerely think that, but it is also political theater, a learned response from mimicking the rhetorical style of those who’ve had so much political success on this issue.

Now let’s be clear, many people are feeling pain because of this decision, especially those whom the policy directly affects or who have family members this affects. The myth is that our personal emotional response should change Church policy.

Sharing feelings on this issue as though they affect the rightness or wrongness of the policy is a logical fallacy. This comes under the category of argumentum ad passiones. While you may feel whatever you want about this policy change, your feelings do not affect whether or not this change was correct. When people talk about their pain as a way of ending a conversation it is little more than emotional manipulation.

Myth #8 The Church Lost and Should Move On

This myth comes from those who are still focussed on the recent Supreme Court ruling Obergefell v. Hodges. They argue that gay marriage is now legal, so the Church should stop fighting it. This myth doesn’t stand up to scrutiny. The Supreme Court decision does not dictate how churches should behave.

This myth also relies on the idea that the Church should base its decisions on popular trends.  If anything, this action is a response to protect the Church from the recent Supreme Court ruling. By categorizing same-sex relationships as apostasy, the Church puts itself in a strong legal position should a same-sex couple sue in order to be married by a bishop or in the temple.

Myth #9 These Changes are Eternal Doctrine

Some who have tried to defend the Church have fallen to a different myth. They try to look at these changes as part of the eternal doctrine of the family that will never change.

These changes are to policy, not doctrine. Policy changes in the Church on a regular basis to best protect the Church and respond to ongoing revelation. This policy may be long-lasting or it may be short-term. These changes are only to be administered by church leadership, so direction on these matters can change and often do.

Eternal families are essential Latter-day Saint doctrine, and same-sex couples frustrate that plan in a way that few other things can, but how baptism policy responds to that reality is not so nearly set in stone.

There’s also one bonus comment that you may read a lot. This very well could be true, or not, there’s no way to know, but in the end it doesn’t matter.

This Could Lead to a Great Exodus 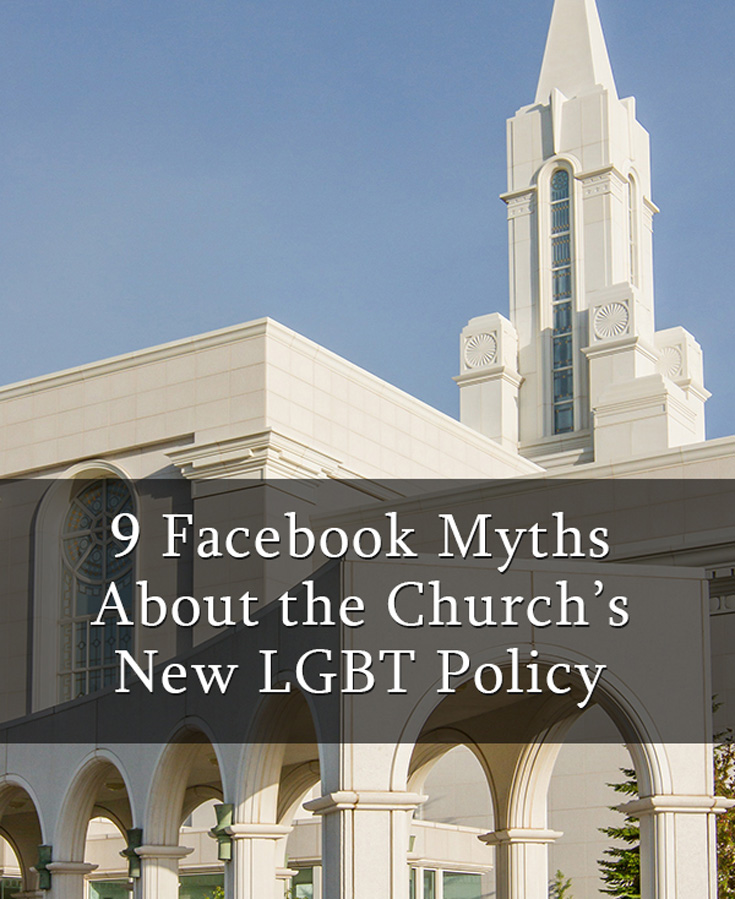 There should be nothing surprising to Latter-day Saints about people threatening to leave. Paul prophesied clearly that this would happen: “In the latter times some shall depart from the faith.” Latter-day Saints do not need to intellectually understand every policy change Church leaders make to know that there is spiritual safety in following their leadership and counsel.

Could this change really be enough for some people to reject all the blessings of Church membership? Maybe, Paul certainly foresaw that something would draw people away. But we can have comfort in following Jesus Christ and His Latter-day Church.

[Editor’s Note: The text of myth 7 has been slightly altered to better reflect the author’s original intent]