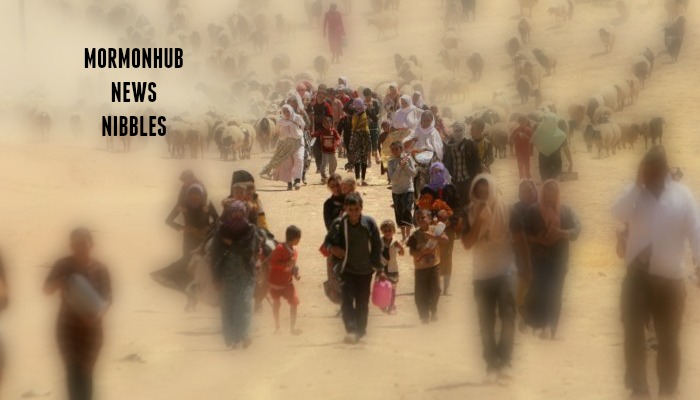 Issuing his first executive order after a week in office, Pres. Trump issued a temporary halt on refugee immigration. The President banned citizens of seven Muslim-majority countries from entrance into the U.S. for 90-days. Protestors took immediate action across the world, including citizens in Utah.

“My concern is that terrorists are not all from Syria and there’s many ways to get into our country,” said R-Governor Gary Herbert. Herbert emphasized the two-year immigration process already in place for refugees. He also noted a need for monitoring once refugees entered the country.

Herbert’s remarks were followed by a statement from the LDS Church, expressing concerns about the ban. The statement urged “all people and governments to cooperate fully in seeking the best solutions to meet human needs and relieve suffering.”

R-Herbert chose Sudanese refugee Yar Kuany Awan to recite the Pledge of Allegiance at his inauguration earlier this month.

Though Trump won Utah with votes to spare, his refugee policies sparked particular concern. Following Trump’s first mention of a possible Muslim-ban, the Church issued a statement on religious freedom.

It’s not solely a strong history of religious persecution that pits the LDS Church against Trump’s new order. President Dieter F. Uchtdorf, beloved by members for his charm and airplane stories, escaped from the Czech Republic as a child and fled to Germany, displaced by WWII.

The ban has resulted in several marches and protests throughout the state of Utah. February 4th marks the date of the next March for Refugees, with over 7.9K people either interested or going.

Though you may recognize his face from the covers of high fashion magazines, you have probably never seen Lucky Blue Smith quite like this.

His steely good looks and icy blue eyes usually give him an otherworldly characteristic when dressed up for couture shoots, but there’s another side to the world famous super model. Lucky Blue gets down to earth in Rob Diamond’s latest film, “Love Everlasting.”

Lucky Blue stars as Bridger Jenkins, a high school senior fleeing with his mother from his abusive stepfather. Down on their luck and with $197 to their name, the pair hope to find peace in a small town. Instead, Bridger finds love in the form of another misfit, a scar faced girl named Clover.

Though the film was officially released in 2016, it’s set to hit select Utah theaters on February 10th, 2017.

The art of recruiting and retaining volunteers just got easier for nonprofits. Thanks to justserve.org, a website launched by the LDS Church, volunteers can now easily connect with organizations within a 75 mile radius.

The website first hit the internet in California, and has since been launched in Boise, counties within Magic Valley, Idaho, and areas throughout Texas.

Ray Parrish, Magic Valley spokesman, commented on the new website, “We believe in service so much. He told Magic Vally News, “It benefits the community and volunteers through their service. We just encourage people of all faiths to get out and volunteer. Often there are opportunities that get missed because no one knows about it.”

15 nonprofits from the Magic Valley area, and hundreds more are registered in their database across the country.