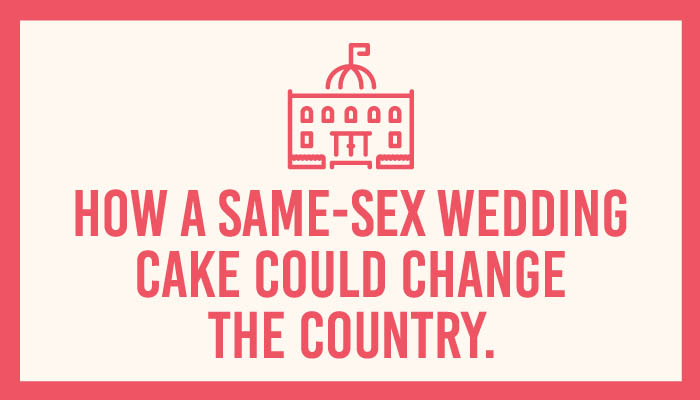 In 2012, Charlie Craig and David Mullins went into the bakery of proudly Christian Jack Phillips. They asked him to bake a cake for a same-sex wedding he did not approve of. He declined, but offered them any of his pre-made baked goods.

This is the fifth article in a five-part series examining the many different questions the case presents. This article asks what the long-term effects of the case may be.

This article looks at three questions:

“This Will Lead to Oppression”

Many people seem legitimately concerned that if Phillips wins, LGBT+ individuals will become second-class citizens, and that other minorities will live in constant fear of being turned away.

In fact, many of the legal arguments in support of the couple that have been sent to the Supreme Court leading up to the case consist entirely of the argument that if Phillips wins it will harm the lives of LGBT+ individuals, setting aside all other considerations.

These concerns may be sincere, but they are also inconceivable in this case. This is an important case, but the effects of it are limited.

This case only protects products that are:

A win for Phillips would likely not affect the sale of any product that doesn’t meet all of those requirements.

A business would still need to serve your retirement party, baby shower, birthday party, or quinceañera.

Non-artistic businesses such as venues, furniture rentals, dry cleaners, and bartenders would still need to serve even controversial events.

And even something as simultaneously expressive and controversial as a wedding cake could still be easily obtained by any business with enough employees.

Except for those narrow cases, LGBT+ individuals would need to be served at every restaurant, pharmacy, amusement park, grocery store, bar, boutique, and every other public accommodation. Unless you were asking a small business to create a custom-made product that they would need to design and that conveys a symbolic message for a controversial event, absolutely nothing would change.

This case isn’t the first to spark concerns about unleashing LGBT+ discrimination. These concerns popped up in a 1995 Supreme Court case, and then in a 2000 Supreme Court case. But LGBT+ rights today are stronger than ever. Protecting first amendment rights for everyone didn’t turn back LGBT+ rights then, and there’s no reason to believe it will now.

This case simply isn’t about that.

Walking into a business worried you might not get service for something controversial would hardly be a unique phenomenon. Businesses today have the right to refuse service to anyone, as long as it’s not based on their gender, race, religion, or in some states, sexual orientation. If I wanted to print Republican party fliers in liberal Austin, or a custom cake for a Mormon baptism in Catholic San Antonio, you can bet I would keep the reason to myself, and be prepared to move on

I hope that most Americans agree that the freedom to not violate your conscience in these narrow instances is more important than being able to get whatever you want, whenever you want, from whomever you want.

But What if the Baker Loses

1) The government can compel what you say

This may seem ideal when it is the government coercing our opponents to give in. But it’s impossible to predict who will be controlling that government in twenty years. The purpose of constitutional rights is to protect you from that unknown government. This ruling would remove the right to decline to say a message you disagree with. How could losing that right negatively affect the causes you care about?

2) You can’t separate identity and behavior

If Phillips can’t separate the act of a same-sex wedding and the identity of LGBT+ it may create a dangerous path for other protected classes. Could an Evangelical claim conversion therapy is essential to their religious identity? Could they then coerce businesses into supporting it? What other behaviors could someone claim is essential to their religion, for example, that you might have to endorse?

3) The economy will lose productive individuals

32% of Americans are opposed to same-sex marriage, many of those for religious reasons. When Jack Phillips lost the case at the lower courts, he didn’t change his religion and start making same-sex wedding cakes, he stopped baking wedding cakes. Colorado lost a baker because it couldn’t tolerate his faith. What other industries will lose Christians because their faith is no longer welcome? How many potential entrepreneurs will decide against starting a business because they do not want to give up their faith?

Twenty-seven states have no nondiscrimination protection for LGBT+ individuals. None. In those states, you can discriminate against LGBT+ Americans even in housing or employment. Most of those states won’t pass the nondiscrimination laws necessary because of fears for religious freedom. Fears Colorado has proved are justified. If Phillips wins, those concerns will largely go away opening the door for greater equality for LGBT+ Americans across the country. But if Phillips loses, those laws have little hope of passing.

Whose Dignity Would Suffer More

Much of the case for coercing Phillips into making the cake is based on the idea that refusing the cake does harm to the dignity of the individuals who asked for it.

In this case, however, both sides would suffer dignitary harm from losing. Many conflicts in our nation are based on identities that clash, and the courts must be in the business of analyzing law and not picking sides.

Still, let’s look at a series of questions to try and determine the dignitary harm in this case.

How could they recover?

Which class has a greater history of discrimination?

Who would be harmed more?

Whose feelings were hurt more?

The dignitary harm that David Mullins and Charlie Craig suffered was no more than they would have suffered if someone simply said to their face, “I think your wedding is sinful.”

The bottom line is not to prove that Phillips was hurt more. Both parties are in a position to have their dignity hurt. So dignitary harm cannot be the deciding factor in this case. Trying to argue that we need to decide this case based on who’s hurt the most is not a productive process, and we should instead focus on balancing America’s brotherly ideals equality and freedom.

Here are a number of hypotheticals not used in earlier articles. Remember these hypotheticals are not intended as one to one equivalent cases, but rather thought experiments to consider similar issues.