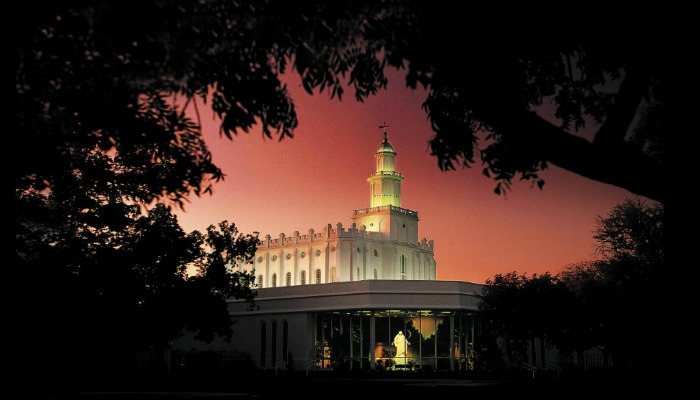 Over the weekend, an individual broke into the St. George LDS Temple and caused an estimated $10-15,000 worth of damage. The good news is they are in custody and have been charged with a long list of infractions, misdemeanors, and felonies. The bad news is that if you want a full write up of the incident including the person’s name, face, and criminal history—you won’t get it here. I will not give this person or what they represent any free publicity. But what I will do is write my plea to this vandal and all like him who indulge in needless destruction of property.

When God created this universe, He made it so there was opposition in all things. The first thing He did was separate light from darkness. He drew a boundary between two opposing things. It is necessary to the fabric of reality that there is a diversity of things and that sometimes those things are in opposition. This necessity trickles all the way down into the health of our societies. I love that I live in a country where people disagree. Diverse ideas and the ability to speak them are the lifeblood of freedom and good conversation.

So in a way, I don’t hate the fact that this vandal has ideas that run contrary to Mormonism. I’m glad he has ideas and I’m glad they drive him to action. We need more people in this world who feel empowered by ideas. But actions that take the form of needless and wanton destruction are meaningless. They accomplish nothing.

By breaking into a place of worship and senselessly wrecking property your actions have spoken louder than your ideas. In fact, your ideas will never be heard or properly understood because all people will know is that you got arrested for breaking and entering. You have silenced yourself. If you want to protest the Mormon Church, do it in a way your ideas will actually be heard. Join the century-long conversation between the Church and those who oppose it.

This conversation, though troublesome at times, is necessary to the health of the Church and its members. Through this conversation, ideas can be sharpened, refined, and clarified. Done properly, it can even be mutually edifying. Without it, we sit in our echo chambers where our ideas do nothing but rebound off each other and stagnate.

The same thing happens in nature. Animals can sometimes evolve without competition for resources. When a new animal is introduced to their habitat, they can go extinct because the new animal is better adapted to the environment. Competition for resources fosters strong and unique adaptation in animal evolution and is why the wildlife on Earth is so amazingly diverse. In conversation, the rules are the same but the resource we compete for are audience ears, eyes, and sometimes souls.

Finally, here is my plea to the vandal—join the conversation. You have a problem with Mormons? Great. But let’s talk about it. Breaking things and hurting people is a poor way to express your ideas. If you don’t want to join, this is what you will become: just another faceless person in the sea of people who get arrested. There are a lot of Mormon haters out there and, I’m sorry, they’re a lot better at hating us than you. When you get out of jail join the rest of us in the Theatre of Dialogue where your voice might be worth listening to. Because as of right now, your actions and ideas will be forgotten.

Now if you do want to revel in all the juicy details of this voiceless vandal’s arrest click here for the Deseret News’ coverage.