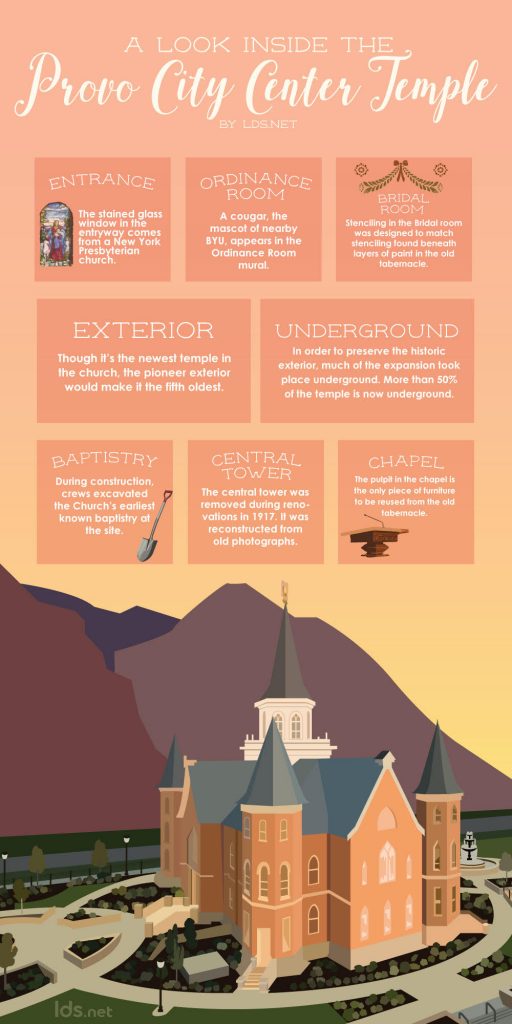 When I heard that more than 800,000 people had toured the Provo City Center Temple, I knew there must be something special about this building. So, I made an appointment to interview Steven J. Lund, coordinator of the Temple Open House and the dedication.

“The Lord has been able to take a tragedy and repurpose it for the good of a community,” Lund said as we looked at the newly completed temple. “Although we were all devastated when the Tabernacle caught fire, we were okay. No one was hurt; we’d simply lost a building.”

While taking a tour of the temple, I learned that early Mormon settlers built the Tabernacle 150 years ago. For decades it held a place in the hearts of thousands of Provo residents. Every President of the Church of Jesus Christ of Latter-day Saints from John Taylor on had spoken from its historic pulpit (which was salvaged from the fire and now stands in the temple’s chapel today), and countless members called the Tabernacle home for conferences and graduation ceremonies. It took nearly three years to both clean up the mess caused by the fire and convert the charred building into a new modern temple. “Watching something great become something marvelous has been an analogy we all can apply in our lives,” Lund said.

The excitement of the new temple brought a flood of volunteers to help Lund with the open house which started on January 1,2016. “Since that first day, over 36,000 ushers and parking volunteers dedicated their time to the Lord’s newest house.” Lund said the volunteers seemed happy to be there even though many had to stand outside in freezing cold weather. “It’s been quite moving for me to see the volume of consecrated effort put into the temple from our community.”

Returning to his analogy on the Tabernacle’s rebirth, Lund explained that things can go terribly wrong in people’s lives, but the Atonement of Christ can heal all of those things. “Even in an unjust world, the Atonement answers injustices and consecrates all efforts back to the Savior.” I could see how the destruction of the Tabernacle and the restoration of the new temple mirrored his reference to sin and repentance. “The physics of His Kingdom are not only ordered around a conservation of mass and of energy, but also a conservation of holiness.”

Over the past 2 months, Lund said he has pondered about the power of this temple as he walked down the halls and examined the beautiful artwork, stained glass, and murals. But he said the real beauty of the temple is not in the furnishings. “Temple art and architecture is not itself sacred, but its transcendent beauty lifts us out of our uninspired lives to a place the Spirit can reveal to us sacred things . . . ultimately it’s the presence of the Holy Ghost.”

On March 20, 2016, Elder Dallan H. Oaks and Elder M. Russel Ballard of the Quorum of the Twelve Apostles will dedicate the new Provo City Center Temple. Lund expressed his excitement to see the Provo City Center Temple become a house of the Lord. In reference to the Church’s additional 149 temples located throughout the world, Lund said, “Each has, so to speak, its own individual personality designed to touch the members of the communities it serves.”

However, Lund also stated that, to him, the most exciting thing about the dedication of the Provo City Center Temple is that the Lord is opening another heavenly portal. “Each temple serves as a portal to the blessings of sacred ordinances,” he said. “Through these ordinances, Heavenly Father enriches our lives and allows us to experience the sacred and the holy. Anytime a temple gets dedicated the world gets a little brighter and a little better.”

As I walked away from our interview and looked up at the finished Provo City Center Temple, which was framed by a star-filled sky, I thought about all the members of the Church who will turn their heads to Center Street and their hearts to the Lord as they celebrate another window to Heaven, another light in the world, and another chance to grow closer to the Savior.