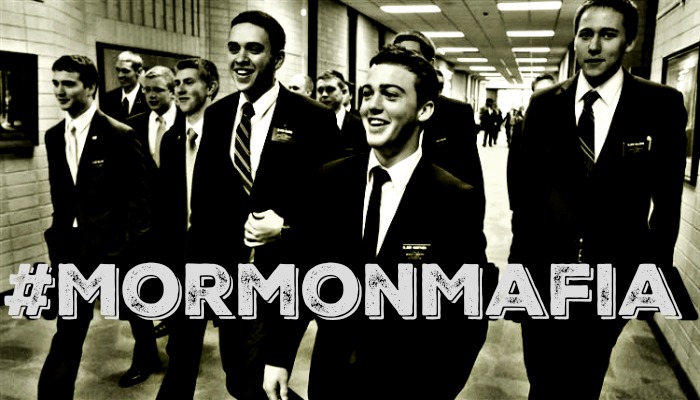 But the #MormonMafia would NEVER serve you a cold meal. Hot casseroles all day, every day. 😎

The Huffington Post recently published an article that dubbed #MormonMafia “Twitter’s best new hashtag,” and we have one person to thank for that: Lou Dobbs.

The initial tweet containing this hashtag was posted by none other than Fox’s Mr. Dobbs himself. It stemmed from his anger at politician Evan McMullin who announced his candidacy for President back in August. McMullin is neck-and-neck with Donald Trump in Utah, which Dobbs thinks will end up handing over the state’s electoral votes to Hillary Clinton.

However, Dobbs never could have anticipated the social-media frenzy his tweet would kickstart… or how because of it, we get to enjoy laughing-out-loud at these 13 hilarious tweets that deal with none other than the world’s scariest organization: the Mormon Mafia.

And let’s be honest… About 50% of us don’t even understand The Godfather References. Unless, you know, we’ve watched it on VidAngel.

The Mormon Mafia headquarters: anywhere but Starbucks… Unless they just really want a Caramel Apple Spice.

The #mormonmafia will shoot you and then frame your friends
.
.
.
.

Into the perfect scrapbook

They don't call them funeral potatoes for nothing… #MormonMafia pic.twitter.com/0VQuPICGLz

After tasting these, even Al Pachino would probably join the Mormon Mafia.

The Friend: a magazine for children and mobsters alike.

Nice charity you have there. Shame if we donated to it. #MormonMafia

"Gosh darn it, you messed with the wrong fellows this time, you nincompoop!" #MormonMafia

You're gonna sleep with the fishes.

The only spare bedroom we have left has an aquarium in it. Hope that's not a problem.#MormonMafia

#MormonMafia bosses want their #MormonThugs to deliver a message to each of the families every month. pic.twitter.com/SfowoHYCrY

Home teachers or HOODLUMS? It can be very difficult to tell the difference.

Is the #MormonMafia that large group of people that show up to help strangers after a natural disaster strikes?

Nothing says “We’ll mess you up” like wearing shirts that say “Helping Hands.”

When Someone is Rude to You, Respond Like a Mormon.

These are just a few of many hysterical #MormonMafia tweets. Share with us some of your favorites in the comments below!