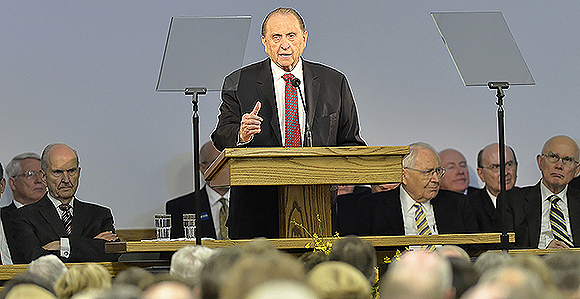 On Sunday, June 22, 2014, www.churchofjesuschrist.org reported on President Thomas S. Monson’s address to newly called mission presidents and their wives during a special sacrament meeting to open the 2014 New Mission President Seminar. He gave counsel from the scriptures, latter-day prophets and spoke of his own experiences when he was a mission president of the Canadian Mission in 1959 and then gave specific counsel in what he calls the “Monson Rule.” (Read on to learn about the Monson Rule.)

He addressed 129 couples from 20 countries who will begin their missionary service on July 1. He told them,

You will be in the Lord’s service twenty-four hours a day, seven days a week, for the next three years and will be recipients of His direction and His blessings

On treating missionaries he told the couples that each Elder and Sister sent to them is a “precious commodity” entrusted to their care and that they have a responsibility to care and love each one. He gave some insight on how to properly motivate missionaries so they can be effective and how their interactions with the Elders and Sisters in their care can affect them in a positive way — even beyond the mission field.

President Monson recalled a conversation he had with President Spencer W. Kimball who said, “When I interview a missionary, I don’t say to him, ‘Are you doing this or that wrong? Do you have this problem or that problem?’ Rather, I say, ‘Tell me what you most admire about your companion.”  President Monson continued to say that this type of interaction promotes a positive tone for the rest of the interview. He also counseled the couples to get to know the missionaries under their care, having one-on-one conversations with them, ask about their backgrounds, family, ambitions and goals.

On Preparation Day and the Monson Rule

He then introduced the Monson Rule,

An email every week from each missionary to his or her parents. I like to tell missionaries that it isn’t significant how much they write but that they be certain to write.

“Next, one of your most effective tools for motivating missionaries will be to build mission spirit. … You can instill within each missionary the conviction that he or she has been called to the greatest mission in all the earth.”

With that mission spirit, President Monson said that it is important to fellowship new members and making them feel welcome. He told of an experience he had in Italy watching new converts as they were greeted, embraced and included by members at a district conference.

The Goal of Mission Presidents and their Wives

President Monson referred to the couples as “Presidents and Sisters,” indicating the importance each of the couples have in their shared calling. Both have shared goals and responsibilities in presiding over their mission.

“Now, beyond those who come to membership in the Church,” said President Monson, “you will find that your missionaries, themselves, will change and grow as they serve to the best of their ability, thus securing blessings for themselves and for future generations.”

[quote_box_right]“Now, beyond those who come to membership in the Church,” said President Monson, “you will find that your missionaries, themselves, will change and grow as they serve to the best of their ability, thus securing blessings for themselves and for future generations.”[/quote_box_right]He told the couples in attendance to expect their missionaries to grow and change as a result of their service. He shared a letter from a missionary who finished his mission to Mongolia. He wrote about the “tangible” changes in himself, knowledge of a new language and culture, better understanding of the scriptures, and being better able to articulate his knowledge of the gospel. But, of other, internal changes, he wrote, that his service “turned a distracted, disoriented teenager … into a committed disciple of Christ filled more fully with charity and an increased interest in service to others. I am now ready to stand proudly with Paul and to ‘give every man that asketh a reason of the hope that is in me.’”

President Monson said, “This message from a missionary to his family represents the transformation which can take place in each of the young men and young women who will come to you as he or she works diligently and fulfills the responsibilities of a missionary. Yours is the opportunity to assist each one in doing so.”

To the new couples getting ready to serve, we at LDS.net wish you all the best over the next three years!

Read more about the 2014 New Mission President Seminar on churchofjesuschrist.org