At the beginning of their third season in the Southeastern Conference, the Texas A&M University football team once again has the world of college football talking. Their surprise road win last week against #9 ranked South Carolina ended the Gamecocks’ 18-game home win streak–the longest in college football. The Aggies have found a formula for success in the toughest football conference in the country, and nothing seems to be slowing them down. Alongside head coach Kevin Sumlin, one person making an impact on the Texas A&M University football team is strength and conditioning coach, Larry Jackson. Respectfully nicknamed “Black Death” by his players for the extreme workouts that push even the most conditioned players to their limits, Jackson is credited with fostering a culture of discipline, rigor, and strength that has allowed the Aggies to compete with the biggest teams in college football. Larry Jackson has coached some of the best football talent in the world — Heisman winners Johnny Manziel and Jason White, as well as NFL MVP Adrian Peterson. However, if they were to see Jackson on a Sunday afternoon at his local church congregation, they might not recognize him.Instead of lifting weights or commanding his players to push themselves harder, Jackson, a member of The Church of Jesus Christ of Latter-day Saints, can be found worshipping with his family and carrying his daughter’s Hello Kitty tote bag. It is a different persona for a man who occupies a high-stress job in the intense world of college football.When head coach Kevin Sumlin came to Texas A&M from the University of Houston, he brought Jackson with him and called him the most important hire. Jackson puts in some of his most critical work during the offseason and summer months, when he pushes players to their limits in every workout so they can finish each game strong in the fall. Because of his specialty, Jackson often spends more time with the athletes than do the other coaches on the staff.

“I get to lead boys and teach them how to be men. Now I know what I was sent here for,” Jackson said. “I have a strong presence with some of the hardest young men, and I feel I was sent here to help those young men find their way in life and understand what the meaning of this life is.”

Jackson relies on his experiences as a former player, coach, and father to help him show his players the proper way to live their lives. “I was once them, which is why I understand it. I don’t hammer those guys with it, but they can tell with my actions,” Jackson said. “I try to sit down with them and give them a clear explanation [that] they are supposed to do certain things and act a certain way.”Jackson’s discovery of the meaning of life started as a kid growing up in Rockdale, Texas, where he attended church services every Sunday with family from a young age and gained a vibrant faith in Jesus Christ as his personal Savior. There were six different Baptist congregations that met in town, and his family attended the one next door to their home because it was the closest. “I grew up, went to church, and did the things I was supposed to; but there were always these little, small questions I had all the time. I had questions about religion, Jesus Christ, where do we come from, what do we believe, why are we here. All the questions you hear in movies,” Jackson said. 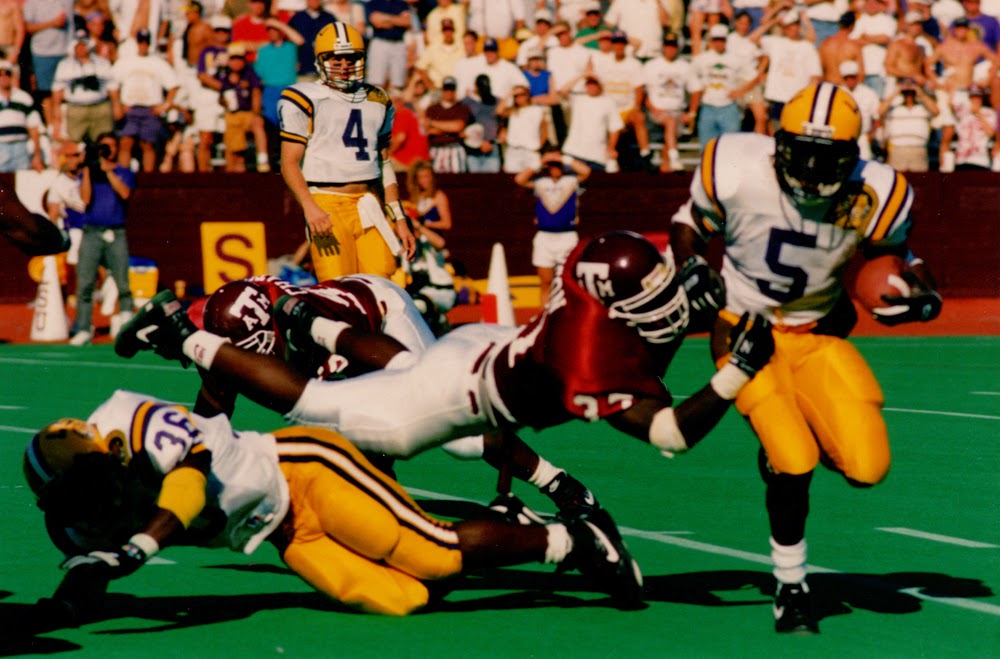 Upon graduating from high school, Jackson received a football scholarship to play for Texas A&M. There, Jackson became a standout linebacker and defensive end from 1991-94. During his time as a member of the Wrecking Crew defense, the Aggies recorded a 42-2-1 record, three Cotton Bowl appearances, and never lost a game at Kyle Field.

Near the end of his college career, Jackson met his wife, Amy, and the two of them journeyed to Denver together while Jackson played for the Broncos. Amy was born into the LDS faith, and upon moving to Colorado, Jackson began attending Sunday meetings with her.“She’s taking me to the different wards, but I’m not being pressured to join or anything,” Jackson said. “So I go to this ward and I have this feeling, and I don’t really know what the feeling is. I can tell you, I’m a young black man living in Denver, Colorado, and there’s not a lot of people that look like me in the ward that I’m in. But I feel more comfortable in this church than I did in my own Baptist churches–and I grew up in those churches…It was the feeling that I had when I was in the church.”

After a stint with the Broncos, Jackson played for the Arizona Cardinals for a year and then the Miami Dolphins. All the while, he continued attending LDS worship meetings and received the same feeling of peace and love in each congregation. Slowly his conversion to the gospel of Jesus Christ was happening without him even knowing it.

“Heavenly Father is nipping at me and working on me. He’s coming at me in every different direction. No matter where I go or where I run, I get this feeling every time I enter the church-house,” Jackson said.

It’s that same feeling that Jackson recognized later when he opened the door to two LDS missionaries who were knocking doors through his neighborhood.

“When I opened the door, the craziest thing happened. That same feeling hit me in the face!” Jackson said. “So I have these two guys standing there looking at me. They’re being really nice guys, like they always are, and they go through their spiel and try to convince me of something, but they don’t realize that I’m ready for them and I want them to come in.”Jackson met with the missionaries over the next few months and in December of 2001, he was baptized a member of The Church of Jesus Christ of Latter-day Saints while visiting his in-laws in New Orleans. Since then, Jackson has coached at the University of Oklahoma and the University of Houston before returning to Texas A&M University in 2012. During that time, Jackson said that his conversion has been a journey. One that he diligently continues today.

“After my baptism, I was waiting for this big conversion moment,” Jackson said. “It was real easy for me to think that I’ve gone through the steps and the conversion is supposed to happen — where is it? Then that’s when reality set in, for me, that my conversion is still happening.

“I’m converted every day because every time I read the scriptures, every time I take the time to pray and ask Heavenly Father to be with me, whenever I’m reading the scriptures and I’m going to church and I’m taking the sacrament–I feel that for me it is something that fills in the gaps and converts me every day.”

Jackson still feels that he is young in the gospel but he has begun preparation, with his wife Amy, to go to the temple to make covenants and receive eternal blessing for themselves and their family.“To know that there is a place for me and I can someday go back with my family and be sealed together — that’s how I’m converted everyday,” Jackson said. “I had a discussion not too long ago, and we were talking about the speed with which you are heading toward Heavenly Father. Sometimes you’re sprinting, sometimes walking, sometimes crawling, but you have to be facing the right direction to go the right way. The only way that I’m facing the right direction is when I’m praying, doing family home evening, and studying scriptures. I’m closest with Heavenly Father when I immerse myself with him and his words and teachings.

“Conversion is every day. I just want to make sure that I’m going in the right direction whether one day I feel like sprinting or walking or crawling. Even if you stop, don’t turn and look the other direction. Keep facing Heavenly Father and your conversion will continue to happen.” 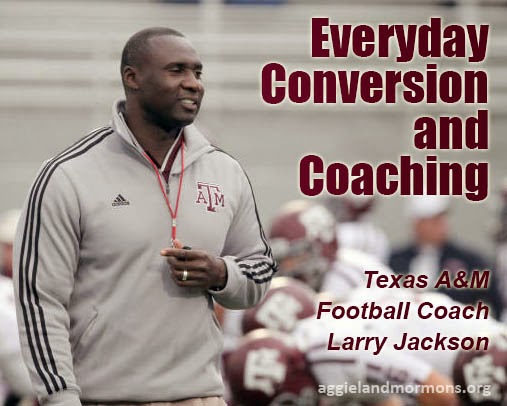