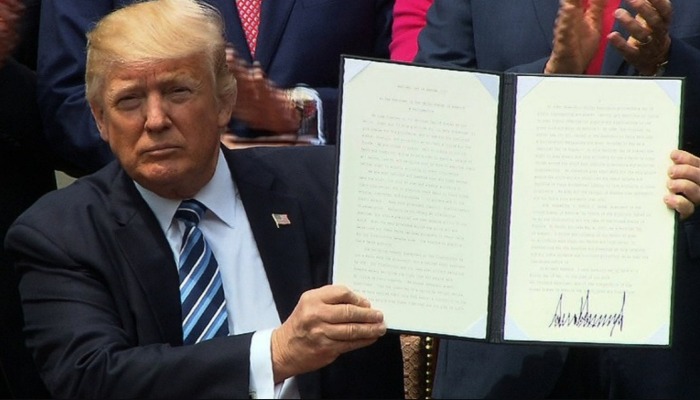 “We will not allow people of faith to be targeted, bullied or silenced anymore,” Trump proclaimed as he penned his name at the bottom of the order. “And we will never, ever stand for religious discrimination. Never, ever.” 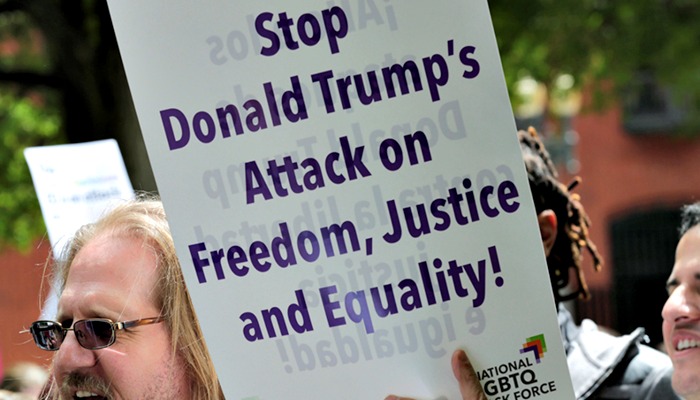 When a draft of the order was first leaked in February, the list of protections was expansive. It offered exemptions from Obamacare mandates on contraception and abortion-inducing drugs for faith-based groups like Little Sister’s of The Poor, and instructed the Supreme Court to protect all forms of religious expression, of all faiths, at all times, in all places. The leaked draft also included measures to nullify the Johnson Amendment, allowing religious organizations to endorse political candidates without threat to their tax-empt status.

Opponents lined up to protest the signing of the order, fearing that the measure “would create an unprecedented license to discriminate with taxpayers’ funds, undermine women’s health care and elevate one narrow set of religious beliefs over all others,” according to Sarah Warbelow, legal director of the Human Rights Campaign, an LGBT advocacy organization.

The ACLU (American Civil Liberties Union) even threatened to sue over the orders claims of repealing the Johnson Amendment.

On the campaign trail, Trump stated, “The first priority of my administration will be to preserve and protect our religious liberty.”

His words, in stark contrast to his sentiments about Muslims, brought hope of safeguards for the religious community. 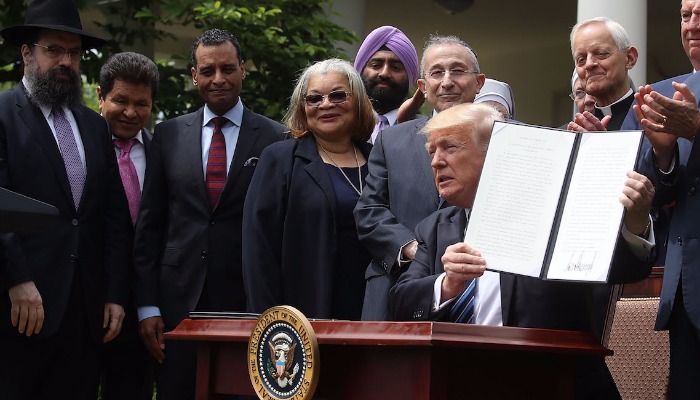 More than half of the protections found from the drafted document were absent upon its signing — along with any concrete legal protections for religious organizations.

The four sections composing the final order offer “guidance” and “considerations” for various government bodies, with the first section of the order declaring it the “policy of the executive branch” to “vigorously promote religious freedom.”

The second section of the order ensures the freedom of churches and houses of worship to speak about “moral or political issues from a religious perspective.” And while this sounds substantial, it does not have any affect on the Johnson Amendment.

“We thought we’d have to sue Trump today,” said the ACLU, following Trump’s signing of the order. “But it turned out the order signing was an elaborate photo-op with no discernible policy outcome. Trump’s assertion that he wished to ‘totally destroy’ the Johnson Amendment with this order has proven to be a textbook case of ‘fake news.'”

The LDS Church released a statement affirming their stance of political neutrality will remain unchanged.

“We are always grateful for the efforts of leaders to safeguard religious freedom and protect the beliefs and religious exercise of all people. The Church of Jesus Christ of Latter-day Saints has been and remains committed to political neutrality. Today’s executive order will not affect that longstanding policy,” said LDS Church spokesman Eric Hawkins.

By the third section, the order encourages Secretary of the Department of Health and Human Services and other federal officials to consider amending regulations in order to exempt faith-based religious organizations from having to offer birth control coverage in insurance plans. While it’s a nice sentiment, the HHS was already advised to amend such regulations by the Supreme Court in Zubik v. Burwell.

The final section of the order instructs the Attorney General to offer guidance on interpretations of religious liberty protections under federal law. Once again, no concrete orders to protect religious liberty are offered.

Because of its lack of binding language and concrete protections, federal officials are free to view the document one of two ways: as framework for greater measures of religious freedom to come, or as a handy way to supplement kitty litter when it runs low. 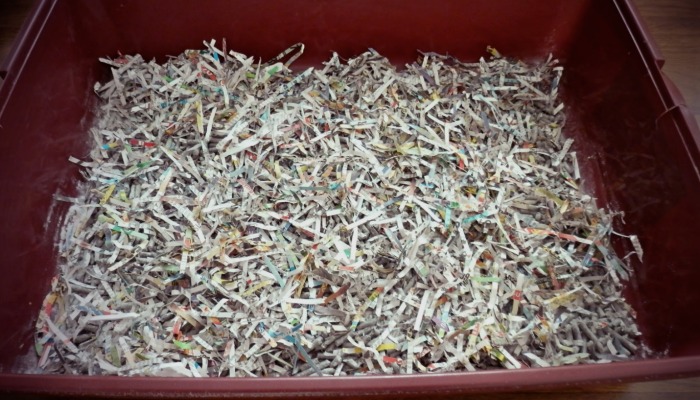 The gesture, in and of itself, is a step in the right direction — the execution, however, leaves much to be desired.