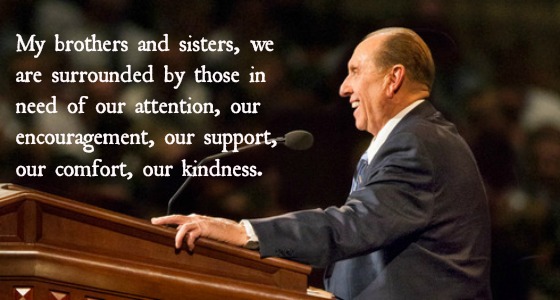 The Facebook group titled Mormons, an unofficial group for The Church of Jesus Christ of Latter-day Saints on the social media site, are starting a movement called “#WarmFuzzies for President Monson.” The movement will culminate on August 21, President Thomas S. Monson’s 87th birthday.

The event, which you can join on their Facebook page, is inspired by a 2008 interview in which President Monson was asked what the ideal gift members could give him for his birthday. He said,

Find someone who is having a hard time or is ill or lonely, and do something for him or her.

In the following October General Conference he spoke of the overwhelming response from primary children around the world. One primary collected a large jar full of what they called “warm fuzzies,” each representing an act of service.

The event begins now and goes until August 21. To participate:
1. Find opportunities to do service.
2. Take a picture and post it to your Facebook profile.
3. Use the hashtag #WarmFuzzies in your post.
4. Invite at least 3 people to join this event.

How do you plan to serve others this year?