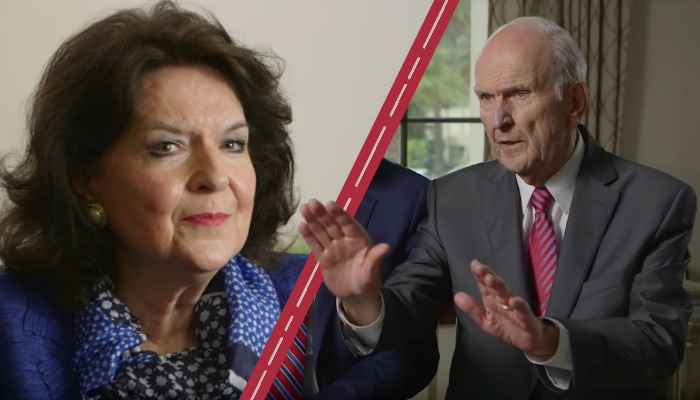 It’s no secret that the current president of The Church of Jesus Christ of Latter-day Saints, Russel M. Nelson, is expert at keeping Latter-day Saints on their toes. He hasn’t been president of the Church for even one year yet, and the worldwide membership is already reeling from the changes rolling in. It makes you wonder, what is going on inside that man’s head? Well, his dear wife, Wendy, recently helped us answer that question.

What Wendy Nelson had to say about her husband

President and Sister Nelson were in Chile on Sunday, dedicating the Concepcion Chile Temple. During their stay, Morm— erm … the Church’s Newsroom managed to snag an interview with Sister Nelson. Check it out:

I have seen him changing in the last 10 months. It is as though he’s been unleashed. He’s free to finally do what he came to earth to do … And also he’s free to follow through with things he’s been concerned about, but could never do. Now that he’s president, he can do those things.

My husband is a global man. I mean, again, he’s a techno guy. He’s a global mind. He thinks outside of the box. If it’s not outside of the box, he’s not that interested in it. He’s not interested in cutting the ham to fit inside of the pot anymore. Just because it was tradition, man… and he’s not just about, ‘If it was tradition, let’s do something different,’ it’s, ‘Let’s look at why were we doing that.’ And that’s what has caught his attention over and over again—when he sees things and says, ‘What are we doing that for? What are we spending the widow’s mite on that for?

He is saying, ‘What really is needful?’ If we’re really preparing the Church and the world for the Second Coming of the Savior, he’s sincere about that. He doesn’t want to spend any money, time, energy, on anything that isn’t really focused on that. It’s pretty stunning.

He is only reporting to the Lord, and he is fearless with that focus. That and his passion for preserving the agency of others. This is not a man who will say, ‘You must…’ In fact, he said to me the other day, ‘I don’t even want to use the word must in any of my talks. I don’t like that word.’ The hymn that says, ‘He’ll call, persuade, direct aright, And bless with wisdom, love, and light, In nameless ways be good and kind, But never force the human mind,’ that is Russell Marion Nelson. He will never force the human mind.

If you think the Church has been fully restored, you’re just seeing the beginning. There’s much more to come … wait till next year. And then the next year. Eat your vitamin pills, get your rest, it’s going to be exciting.

What do you think of Sister Nelson’s comments? Does President Nelson’s approach make you excited, or nervous? Which traditions would you be happy or sad to see go? Let us know in the comments.