Faith What is an Anointing? 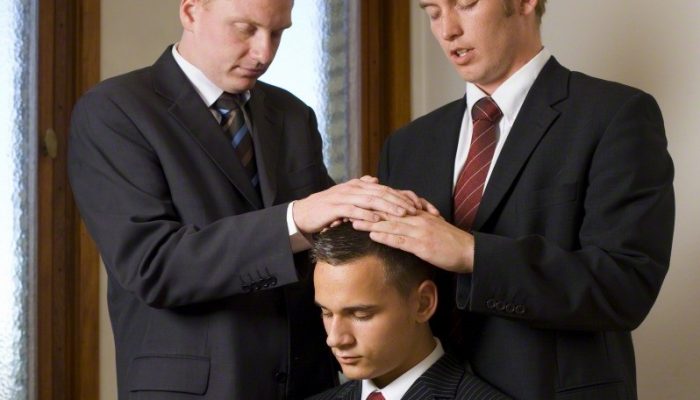 I joined the Church when I was 16, and was the only member of my family to do so. My parents really resisted allowing me to be baptized, until they thought my conversion might be temporary — a phase. Because of that resistance, after I joined the Church, I was never able to attend Seminary. Although my testimony was solid, I wasn’t able to participate in everything that was available for me. For that and other reasons, I learned very slowly how the gospel functions in the minutia of our lives.

I had heard about Patriarchal Blessings and was able to get mine before I went to college, but I knew nothing about other sorts of priesthood blessings, not even for healing, and I had never heard of an anointing.

Just before I turned 22, I was ready to be married in the temple. I had no preparation other than being worthy to receive a recommend. Thus, the entire experience was a surprise, and I was especially, pleasantly surprised by the anointing, presenting me with an opportunity to start over with a clean slate, just like I did at baptism.

Anointing with oil has been part of the gospel, probably, since Adam had posterity on the earth. But our earliest record of it is when the Israelites built a tabernacle in the wilderness, and Moses set apart Aaron, and all the objects in that portable temple to the service of God. Olive oil was used to anoint the tabernacle of the congregation, the ark of the testimony, and other sacred instruments, as well as to anoint Aaron and his sons. (See Exodus 30:22–31.) All of these temple objects were consecrated to the service of God, just like Aaron was.

Priests who ministered in the temple also used olive oil as part of their ritual offerings.

In ancient times — in addition to prophets, priests, and holy objects — Israelite kings were also anointed with oil to perform their special duties and to denote that they were called to their office by God.

Holy anointing is a practice under the auspices and power of the holy Melchizedek Priesthood (which Moses, Samuel, and Elijah had as prophets).

Only consecrated olive oil, set apart and blessed by the priesthood, can be used for anointings in the Church. That’s the way it was anciently, and that’s the way it is today.

Olive Oil is Symbolic of the Savior

Why is olive oil used as anointing oil?

Anciently, oil pressed from olives was considered the cleanest, clearest, brightest-burning, longest-lasting of all animal and vegetable oils. It was also the purest of oils and so was perfect for holy anointings.

Olive oil was invaluable to the Israelites. It was not only a healthful food, but an ointment for the skin and for medicinal purposes, the very fuel for their lamps. It provided sustenance, healing, and light — a fitting symbol for the Savior. Olive oil is used for all these things, but it has to be set apart and consecrated before it can be used for holy purposes.

The Church has a prescribed pattern for consecrating oil.  One location for instructions is the Family Guidebook, available on LDS.org. Once properly consecrated, olive oil can be used for sanctifying ordinances and for healing the sick.

Jesus Christ is “the Anointed One”

Jesus is called the Christ (a Greek word) or the Messiah (an Aramaic word). Both words mean “the anointed.” He is the one anointed of the Father to be the Father’s personal representative in all things pertaining to the salvation of mankind (Bible Dictionary). (See Isaiah 61:1–3; Luke 4:16–22; Acts 4:27; Acts 10:38.)

Jesus Christ was set apart before the foundation of the world to be its Savior. He was the only truly sanctified person who ever lived on the earth, because He was perfect; and He completely consecrated His time, energies, and life to do only the will of the Father.

Although the Book of Mormon mostly concerns itself with Old Testament times, Book of Mormon prophets knew of Jesus as the Anointed One and called Him the Christ. They had faith in Him before He came into the world.

Now they did not suppose that salvation came by the law of Moses; but the law of Moses did serve to strengthen their faith in Christ; and thus they did retain a hope through faith, unto eternal salvation, relying upon the spirit of prophecy, which spake of those things to come (Alma 25:16).

To be sanctified is the process of becoming free from sin, pure, clean, and holy through the atonement of Jesus Christ. We can “sanctify ourselves” through our dedication to righteousness in the Lord; we can also be formally sanctified (although we must continue in worthiness) in our temple service, through the anointings performed by men and women there in the power of the priesthood.

Latter-day Saints who establish themselves in Christ and continually repent can live their lives in a sanctified state all the time. That reservoir of holiness can be called into the Lord’s service in an instant, whenever the Lord might need us to be His hands.

Anointing for the Healing of the Sick

In April General Conference 2010, Dallin H. Oaks gave a detailed talk on healing the sick. Elder Oaks reminded listeners that Mormons believe in healing “…by medical science, by prayers of faith, and by priesthood blessings.”

Elder Oaks taught that “there are five parts to the use of priesthood authority to bless the sick: (1) the anointing, (2) the sealing of the anointing, (3) faith, (4) the words of the blessing, and (5) the will of the Lord.” He hearkened back to New Testament times and the biblical record of the apostles anointing with oil to heal the sick.

The book of James teaches the role of anointing in connection with the other elements in a healing blessing by priesthood authority: Is any sick among you? let him call for the elders of the church; and let them pray over him, anointing him with oil in the name of the Lord: And the prayer of faith shall save the sick, and the Lord shall raise him up (James 5:14–15).

Sealing the anointing affirms it, so the Lord can pour out blessings from heaven. It is affirmed by the same priesthood power by which the anointing was performed, the Melchizedek Priesthood.

Priesthood blessings for the healing of the sick are common in the Church, but you don’t see much published about the miracles they yield, either in print or through the spoken word.  Said Elder Oaks, “…modern revelation cautions us not to ‘boast [ourselves] of these things, neither speak them before the world; for these things are given unto you for your profit and for salvation’” (Doctrine and Covenants 84:73).

In Doctrine and Covenants 42:48 the Lord promises that “he that hath faith in me to be healed, and is not appointed unto death, shall be healed.” In a healing, the anointing, sealing, faith, and the will of the Lord are the essential elements. In other blessings offered by the power of the priesthood (patriarchal blessings, fathers’ blessings) the words are the essence of the blessing.

Elder Oaks quoted a story from Elder Glen L. Rudd, an emeritus General Authority, that shows the power of healing anointings and blessings:

I received a phone call informing me that a family member, a 12-year-old girl named Janice, was in the hospital with critical injuries. Her mother wanted her to receive a priesthood blessing.

Elder Cowley and I went to the hospital. There we learned details of the accident. Janice had been hit by a city bus. The double rear wheels had passed over her head and body.

Elder Cowley and I entered the room where Janice lay. She had a broken pelvis, a badly injured shoulder, multiple broken bones, and severe head injuries that were beyond repair. Nonetheless, it was our feeling that we should administer to her and bless her. I anointed her with oil, and Elder Cowley sealed the anointing. In a strong and resolute manner he blessed her to become well and whole and to live a normal life. He blessed her that she would recover with no lasting effects from her many injuries. It was a great blessing and a truly magnificent moment.

Janice didn’t move a muscle for more than a month. We never lost faith. A blessing had been pronounced that she would get well and have no lasting impairments.

Many years have now passed since that hospital visit. I spoke with Janice recently. She is now 70 years of age, the mother of 3 children, the grandmother of 11 grandchildren. To this day, she has not suffered a single negative effect from her accident.

The pattern for anointing and blessing the sick has also been received by modern prophets as well as ancient prophets. It is a prescribed pattern, but the Spirit and the Promise are always individual, according to the needs and faith of the person who is receiving the blessing, and secondarily, the faith of those concerned for the individual, and thirdly, the elders giving the blessing. An elder’s worthiness is not as important as the faith of the individual. He is a conduit for the Lord, and the focus is not on him.

“We apply hands and oil, the physical touch and the tangible substance, but the hands and the oil do not heal. It is faith in Jesus Christ and the power of the priesthood that heals” (D. Kelly Ogden).

Consecrating oil, [and] administering to the sick… do not need to be authorized by the presiding authority. A man is authorized to perform these ordinances, if he holds the Melchizedek Priesthood and is worthy.

Likewise, if two elders are not available, one elder may perform both the anointing and the sealing of the anointing, as well as pronouncing a blessing through inspiration.

Understanding Anointing Can Add Holiness to our Lives

We, as Latter-day Saints, have been entrusted with a fullness of the gospel, and anointing for sanctification and healing is a beautiful part of that. Deepening our understanding and appreciation for the anointings we have received can help us live up to the blessings and promises God has given us.