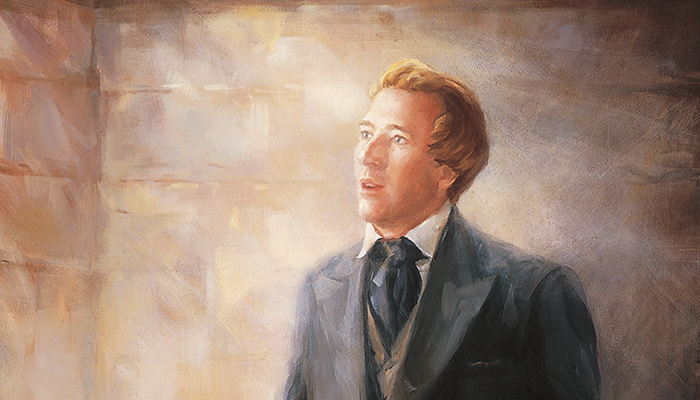 Someone asked me once to give proof Joseph Smith was a prophet of God (and had the authority of God) using only the Bible. I was able to answer it, but explaining about authority, priesthood keys, and the Melchezidek and Aaronic priesthood was difficult and I think someone with a ready answer could do it much better and more succinctly.

I tend to overcomplicate my answers. How do I explain the Melchezidek and Aaronic priesthood and the prophetic calling simply while still providing good Bible references/evidence?

Proving anything we believe with only the Bible should be pretty easy (as easy as proving anything religious). Proving that Joseph Smith was a prophet, however, is impossible without a witness of the Holy Ghost. What we can do is see if Joseph’s experiences hold consistent with the experiences of previous prophets.

Let’s just look at a couple big ones you mentioned in your question: Joseph claims that God called him to be a prophet when he was 14 years old, and he claims that angels visited him and gave him two different forms of the priesthood.

So first, does God call prophets at all? Yes. For whatever reason, God speaks to His children on Earth through prophets, and he has always done it that way:

As he spake by the mouth of his holy prophets, which have been since the world began (Luke 1:70)

And it matters who that person is. In Exodus 4, God calls Moses to be his mouthpiece on Earth, but Moses shrinks from the responsibility, because he is not an eloquent speaker. After some debate, God finally resolves to allow Aaron to speak for Moses, but the Lord still insists on communicating with Moses instead of going straight to Aaron. Moses was the one God called to be the prophet, so Moses is the one it had to be.

But, is it weird for God to call a child like Joseph Smith to be a prophet? No. In fact, it is written in 1 Samuel 3:1,

And the child Samuel ministered unto the Lord before Eli. And the word of the Lord was precious in those days; there was no open vision.

It’s in this same chapter that the Lord first communicates with Samuel. Interestingly, we find Samuel in a similar situation as young Joseph Smith. He was a child when he was called, and living in a time where there were no longer open visions from God.

Are Both Priesthoods in the Bible?

So, of course, people will concede that it’s possible Joseph was called (anything is possible), but what about all the crazy things he taught? Mormons are really strict on authority and the levels of priesthood, but did all that just come from Joseph Smith? Well, actually, references to the priesthood, even different forms of the priesthood, can be found throughout the Bible.

Way back in the Old Testament, when Joshua and the Israelites move into the Promised Land, each tribe was granted a portion of what they conquered. The Levites, however, had already been ordained by God to be priests, so that authority was seen as their inheritance rather than land. (Tribes can get confusing. This article from the 1982 Ensign helps a lot). See Numbers 18:23-24 and Joshua 18:7.

In Hebrews 5:4-6, Paul shows that Christ was raised by God as a high priest, not of the Levitical order (“order” is a word used to describe a religious group or lineage), but rather of the order of Melchizedec (See Psalms 110:4 and Hebrews 7:14-16). Paul then extrapolates that if the Levitical priesthood were so mighty, what would be the need of our Lord Jesus Christ to have a different one? He concludes, Christ brought a higher law, which demands the use of a higher priesthood.

The biggest problem when “proving” anything with the Bible is its complexity. Very few people know the stories of the Bible. Mostly, they just know the popular verses. The doctrine is all there, but it’s the history and backstory that you need to explain, and that’s when it gets complicated. I wrote this post for you, and I know you’ll understand it. The best way to teach this to someone not familiar with the Bible is to follow Aaron’s example when he taught the father of Lamoni:

And it came to pass that when Aaron saw that the king would believe his words, he began from the creation of Adam, reading the scriptures unto the king—how God created man after his own image, and that God gave him commandments, and that because of transgression, man had fallen. (Alma 22:12)

Start at the beginning and read the scriptures with them. The stories will teach themselves.