Kendal Levine’s world changed forever when she was hit by a car while serving as a missionary in Australia. For weeks, her family wondered if she would ever wake up from her coma. Now, almost exactly one year later, the 21-year-old is learning to walk again and sharing her plans for returning as a missionary to Australia.

KUTV reports that the past 12 months have been filled with hospitals and rehab for Levine, who suffered a traumatic brain injury from the accident. The Levines have stayed optimistic through it all though.

David Levine, Kendal’s father, told KUTV, “It’s been the hardest year of our lives, but of course it’s probably been the most rewarding as well.”

Prior to her mission, Kendal gave up a full-ride college basketball scholarship to serve the Lord. Although Kendal may have been angry about the accident at first, she says she now understands that “there’s a reason for it.”

Everything happens for a reason, no matter what it is. Just be patient.

Levine says she plans on not only making a full recovery, but returning to her mission and perhaps play collegiate ball again, but only time will tell.

Read more about Kendal’s journey on the GoFund Me account set up to help lessen the burden of medical costs for the Levine’s. 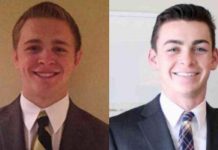