Faith Defending the Faith 5 Things That Had to Happen if The Book of Mormon is... 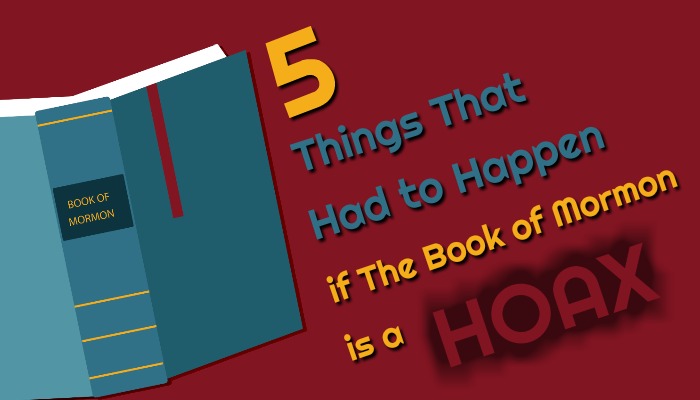 We claim that The Book of Mormon is the keystone of our religion. If the origin of the book is true, it means that Joseph Smith and his successors were (and are) prophets of God and The Church of Jesus Christ of Latter-day Saints is the only fully true church on earth.

Sheesh, that’s a bold claim. It’s a claim that understandably separates people familiar with our faith into two groups: One group claims the book is true; the other claims it’s a sham.

Let’s assume for a moment that The Book of Mormon is indeed an elaborate hoax. What does such a scam entail? Let’s see.

1. Joseph would either have had to masterfully lie to his family for years, or they were in cahoots the whole time

It takes a real scumbag to flat-out lie to your entire family, but that’s what we’ve got to assume Joseph did if The Book of Mormon is a hoax—starting at age 14 (at the latest) with the First Vision. He would have had to have lied to his parents, siblings and, later on, even his wife.

If Joseph lied, he allowed his older brother, Alvin, to waste his final words to Joseph on a farce: “I want you to be a good boy and do everything that lays in your power to obtain the records. Be faithful in receiving instruction and keeping every commandment that is given you.” Joseph was still only a teenager.

The second theory is even less likely than the first. Assuming the entire family was in cahoots the whole time, how is it possible that not one person “spilled the beans” in the midst of so much persecution, injustice and even martyrdom? Even Joseph’s wife, Emma, who later left the official church after Joseph was killed, still defended the truthfulness of The Book of Mormon for the rest of her life. She had nothing left to gain from upholding the supposed lie that killed her husband and, indirectly, one of her children.

And let’s consider Alvin again. If he’s in on the scheme along with the rest of the family, why would his last words to Joseph been a petition to “obtain the records?” No, this theory doesn’t add up.

2. Joseph would have had to have started planning in his early teens and suffered through years of persecution even before The Book of Mormon was published

If it’s all a hoax, Joseph was probably after either fame or money. That said, if the public’s immediate reaction to his story was one of brutal persecution, why would he persist when he already knew the public thought he was lying? Joseph himself said,

It caused me serious reflection then, and often has since, how very strange it was that an obscure boy, of a little over fourteen years of age, and one, too, who was doomed to the necessity of obtaining a scanty maintenance by his daily labor, should be thought a character of sufficient importance to attract the attention of the great ones of the most popular sects of the day, and in a manner to create in them a spirit of the most bitter persecution and reviling. But strange or not, so it was, and it was often the cause of great sorrow to myself.

However, it was nevertheless a fact that I had beheld a vision. I have thought since, that I felt much like Paul, when he made his defense before King Agrippa, and related the account of the vision he had when he saw a light, and heard a voice; but still there were but few who believed him; some said he was dishonest, others said he was mad; and he was ridiculed and reviled. But all this did not destroy the reality of his vision. He had seen a vision, he knew he had, and all the persecution under heaven could not make it otherwise; and though they should persecute him unto death, yet he knew, and would know to his latest breath, that he had both seen a light and heard a voice speaking unto him, and all the world could not make him think or believe otherwise.

So it was with me. I had actually seen a light, and in the midst of that light I saw two Personages, and they did in reality speak to me; and though I was hated and persecuted for saying that I had seen a vision, yet it was true; and while they were persecuting me, reviling me, and speaking all manner of evil against me falsely for so saying, I was led to say in my heart: Why persecute me for telling the truth?

If it’s a hoax, it seems like a lot of effort for a gig that wasn’t looking very promising to begin with.

3. Joseph had to have dictated the entire book from memory

Let’s assume for a moment that Joseph had previously written the entire Book of Mormon and had the pre-prepared manuscript carefully stowed away under his mattress. He did not have this alleged manuscript nor any notes during the translation. He must have had an incredibly photographic memory to recite the 531-page farce word for word.

His wife confirms: “He had neither manuscript nor book to read from. … If he had had anything of the kind he could not have concealed it from me. …when acting as his scribe, [Joseph] would dictate to me hour after hour; and when returning after meals, or after interruptions, he could at once begin where he had left off, without either seeing the manuscript or having any portion of it read to him. This was a usual thing for him to do. It would have been improbable that a learned man could do this; and, for one so ignorant and unlearned as he was, it was simply impossible.”

I’m sure Joseph appreciates the compliment in that last sentence.

4. Joseph had to have been a closet historical and theological genius

Let’s travel back in time to Palmyra, New York, in the 1820s. There is not internet. No Google searches, no smartphones, no cars, no telephones. I’m not even sure how accessible a library would have been at that time.

Additionally, the Smith family was poor. They were farmers. Joseph had three years-worth of formal education. Keeping all of this in mind, it seems extremely unlikely that he’d be able to masterfully intertwine the historical and theological intricacies contained in The Book of Mormon.

The Book of Mormon is replete with bits of biblical history that fit like puzzle pieces in the Book of Mormon chronology. For example, Jacob chapter five is a complicated allegory dealing with the history of the House of Israel. One current leader in the Mormon Church says he has to “map it out to follow its intricacies.”

Harold Bloom, an author and professor of the humanities and English at Yale University, said,

…[Joseph] Smith and his apostles restated what Moshe Idel, our great living scholar of Kabbalah, persuades me was the archaic or original Jewish religion, a Judaism that preceded even the Yahwist, the author of the earliest stories in what we now call the Five Books of Moses….The God of Joseph Smith is a daring revival of the God of some of the Kabbalists and Gnostics, prophetic sages who, like Smith himself, asserted that they had returned to the true religion of Yahweh or Jehovah.

How could Joseph have become an expert on ancient Judaism? Who knows. Additionally, where did this kid get the theological statements that we’ve been quoting for nearly 190 years now?

O that cunning plan of the evil one! O the vainness, and the frailties, and the foolishness of men! When they are learned they think they are wise, and they hearken not unto the counsel of God, for they set it aside, supposing they know of themselves, wherefore, their wisdom is foolishness and it profiteth them not. And they shall perish.

But to be learned is good if they hearken unto the counsels of God.

Those are just three of hundreds of examples. Many passages from The Book of Mormon blatantly contradict the popular theology of Joseph’s time, and we are to believe he just pulled these statements out of thin air?

5. If it’s a hoax, Joseph gave up his life, left his wife a widow and his children without a father—for a lie

Elder Jeffrey R. Holland expresses this point better than I ever could:

What if it’s real?

Critics have scrambled for the past 187 years to piece together a secular plot that can adequately explain the coming forth of The Book of Mormon.  There are theories, conjectures and diabolical schemes, but at the end of the day there is no consensus. Those that oppose the divine origin of The Book of Mormon simply cannot agree on how it came to be.

But the believers agree, it happened how Joseph Smith said it happened. The Book of Mormon is real. It’s not an elaborate hoax. It is “a volume of ancient scripture comparable to the Bible. It is a record of God’s dealings with the ancient inhabitants of the Americas and contains, as does the Bible, the fulness of the everlasting gospel.”

But you don’t have to take our word for it. Find out for yourself if The Book of Mormon is true by following these instructions.