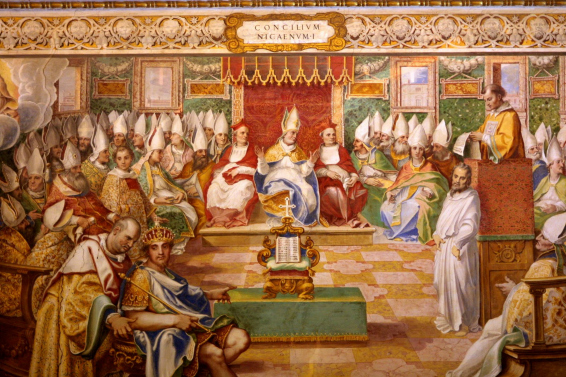 The Council of Nicaea and the Nicene Creed were influential in bringing to order the Orthodox Christian faiths that we see today. But what does that mean in relationship to The Church of Jesus Christ of Latter-day Saints?  First, we need to understand fully what occurred at the Council of Nicaea and decipher from that what made this event such an integral part of past and modern-day Christianity.

What happened at the Council of Nicaea?

The Council was called together by Emperor Constantine the Great in AD 325. Synods, or councils of bishops, came together in the first ecumenical council to discuss several points to clear up disputes on what they believed was true doctrine. A major dispute centered around the nature of Jesus Christ and the Father.

A certain man named Arius taught to his followers that Christ was just a Creature created by God the Father out of nothingness. His argument spread to that everything was created through the Son and that he had no existence before God the Father made Him.

Additionally, Arius believed that the Son had free will to chose right from wrong and that God the Father’s divinity was far greater than the Son’s.  The Council believed that Arius was misinterpreting scripture and wanted to make clear that what he was teaching was false. Saint Alexander of Alexandria fought that the Son of God had the same divinity as the Father and that he is co-eternal with the Father, otherwise He could not be the Son.

Much of the debate focused on the terminology of the words: “born,” “created,” and “begotten.” Arius believed they all were essentially the same words but others who followed Alexander’s teachings believed the meanings to be different. The result of the Council defeated Arius’s argument and ultimately came to the conclusion that the Son of God is co-eternal and co-substantial to the Father.

Another topic they wanted to discuss was when to celebrate Easter. At the Council, a creed was drawn to finalize the decision made and to put into effect other mandates that the Christian Church at the time desired to keep as canon. So all together the resulting statement from the First Council of Nicaea was this:

“We believe in one God, the Father Almighty, Maker of all things visible and invisible. And in one Lord Jesus Christ, the Son of God, begotten of the Father [the only-begotten; that is, of the essence of the Father, God of God, Light of Light, very God of very God, begotten, not made, being of one substance with the Father; By whom all things were made [both in heaven and on earth]; Who for us men, and for our salvation, came down and was incarnate and was made man; He suffered, and the third day he rose again, ascended into heaven; From thence he shall come to judge the quick and the dead, and in the Holy Ghost.”

To members of The Church of Jesus Christ of Latter-day Saints, this may look a tad familiar. 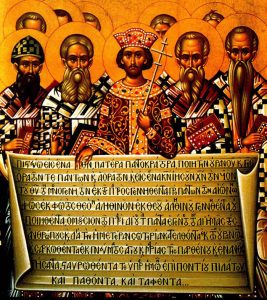 The Nicene Creed vs. Articles of Faith

“We believe in one God, the Father Almighty…And in one Lord Jesus Christ…and in the Holy Ghost.”

“We believe in God, the Eternal Father, and in His Son, Jesus Christ, and in the Holy Ghost.” Seen here is very little difference between the two statements. Now, compare what is stated in the Creed to the Third Article of Faith:

“…who for us men and for our salvation, came down and was incarnate and was made man; He suffered, and on the third day he rose again, ascended into heaven; From thence he shall come to judge the quick and the dead…”

“We believe that through the Atonement of Christ, all mankind may be saved, by obedience to the laws and ordinances of the Gospel.”

There is more of a variance between these two statements, but I believe that they both expound upon each other. Mormons also agree with the Creed in how Jesus, the Son of God, came down and was born as man on earth and that He suffered on the cross and that He was resurrected and ascended to heaven.

Members of the Church of Jesus Christ of Latter-day Saints also know that Jesus is the only begotten of the Father, and that they both are creators.What the Third Article of Faith added is in regard to the Atonement that Christ went through prior to his death on the cross. 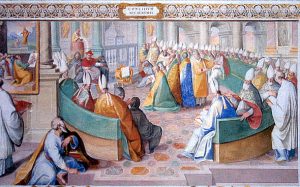 A common myth is that it was in this particular Council they made the decision regarding the Trinity, which is the belief that God the Father, the Lord Jesus Christ and the Holy Ghost are one God and in three persons. Even though the idea was discussed by certain theologians during the late 100’s and early 200’s AD, however, the Trinity wasn’t discussed as doctrine to Orthodox Christians until later in AD 362.

The Council of Nicaea was monumental in setting a standard for what Christianity believes. I am personally grateful for those men at that point of time who were willing to make certain that there was no doubt about the nature of God the Father and Jesus Christ.