My senior year of high school, I learned a valuable lesson about fear — and I learned it the hard way.

Growing up on the East Coast, I was in the minority as a member of The Church of Jesus Christ of Latter-day Saints. Although I was occasionally teased for being Mormon, it was usually good-natured, and no one seemed to have any problems with my beliefs. I didn’t have to stand up for my religion often (friends who weren’t even members would frequently do it for me if anyone made a dig about the Church), but that day finally came — the day when I needed to stand up for my faith and share what I believed.

That day is one I’ll never forget. I can distinctly remember going into class, where my teacher directed us to arrange ourselves in a circle. Since we often did this for class discussions, I probably didn’t think much of it — but the discussion we were about to have was nothing like anything I’d ever experienced in school before.

My mind reeled. I had no idea what to do or say, and I was terrified. It was 2011, so Prop 8 had happened somewhat recently and gay marriage had yet to be legalized. And to be completely honest, the topic of gay marriage is one I’ve always struggled with, which made this even harder. I don’t completely understand why God opposes homosexual relationships, but I do know that He understands much that I don’t — and that because of that, even when I don’t fully understand certain commandments, I will follow Him.

In any event, the discussion quickly became heated (to say the least). People who were pro-gay marriage completely lit into those who weren’t: we were homophobic bigots who couldn’t think for ourselves. One comment in particular bothered me, though: “You can’t give me one reason for opposing gay marriage that doesn’t come back to the Bible.”

It was said with such venom, but I just remember thinking, “Yeah, so?” Excuse me for trusting the being whom I believe to be the most powerful and wise Person in existence! In Isaiah, we read, “For my thoughts are not your thoughts, neither are your ways my ways, saith the Lord. For as the heavens are higher than the earth, so are my ways higher than your ways, and my thoughts than your thoughts” (Isaiah 55:8-9). I trust Him, and I believe what He says.

I desperately wanted to say that trusting God and following His counsel doesn’t make us weak. ‘We’re not bigots!’ I wanted to shout. We’re simply trying to do the best we can with the knowledge we have and the commandments we’ve been given.

But I didn’t say that. In fact, I didn’t say anything at all. Instead, I just sat there for 90 minutes being berated and mocked for my beliefs. I didn’t try to facilitate understanding, I didn’t try to share what I believed or why, I didn’t even try to express the importance of being kind even when we may not agree with each other. I didn’t do a single thing.

I don’t think I was wrong not to make some kind of statement on gay marriage — and that’s not what I’m trying to do here, either. Truthfully, my own views on gay marriage and same-sex relationships are complex. I don’t have all the answers, but I am happy to discuss my views with any civil person who asks. But they don’t ask. Once they find out that I’m LDS, they just start screaming bigot and hater. That in itself is bigotry, but they can’t see that.

Where I feel like I messed up — where I do think I was wrong — was in not say anything. I could’ve defended the importance of free speech, free worship, and free thinking. I could’ve explained my own thought process: that I believed in God and that He knew what He was doing, and that even when I didn’t understand His commandments, I trusted Him and followed His teachings.

Honestly, I would still be really scared if I was in that situation! I don’t want to offend anyone or hurt anyone’s feelings. Plus, peer pressure is a scary thing, and that’s why so many people (including me!) have succumbed to it. But that same God that I profess to believe in has said, “For, behold, you should not have feared man more than God” (D&C 3:7). And it’s true. I trusted Him until the minute it counted! Then, when I had an opportunity to share my beliefs, I cared way more about what my classmates thought about me than what God thought.

The point I’m trying to make isn’t a political one: I’m simply trying to say that no matter the topic, God expects us to stand our ground and defend our beliefs. And there’s a reason He asks us to do that. He understands that when we stand up for His commandments and don’t let others belittle us, we are becoming more Christlike. Christ didn’t care about being popular; He cared about doing Heavenly Father’s will — and I want to be like that. 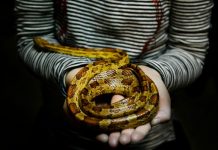 Fear: Are YOU Letting Satan Control Your Life?