Faith The Quorum of the Twelve Before They Were Called: Ronald A. Rasband 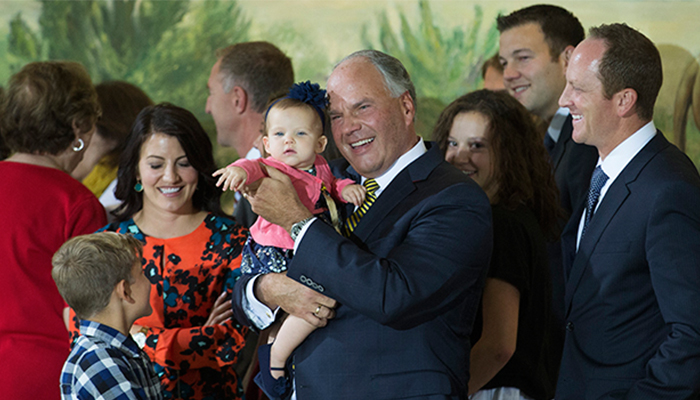 You know Elder Ronald A. Rasband as the newest member of the uoteuorum of the Twelve Apostles. But did you know that his previous callings took his family to England? To Peru? To the Middle East? This biography brings together of some of his most cherished experiences and adventures.

The Goal to Graduate

Ronald came from a middle-class family. His father drove a delivery truck for a bread company and he belonged to the Teamsters’ Union. As neither of his parents were able to finish college, their children focused on graduating from college.

Because he couldn’t afford to live away from home, Ronald chose to attend the University of Utah, which allowed him to live at home, work, and attend school full-time. Ronald points out that “sometimes we need to be willing to adjust our goals and modify our plans.”

Ronald considers meeting his wife, then Melanie Twitchell, the most important event of his college days. They dated and were married in the Salt Lake City Temple on September 4, 1973.

“We chose to start our family shortly after we were married,” Ronald says, “having confidence that we would be blessed in our temporal matters if we put the Lord first. I can highly recommend this plan to you here today. Also in those beginning years of marriage I served as president of my elders quorum, worked mostly full-time, and continued with my goal to get a degree in business and marketing. Honestly, life could not have been more challenging or full than it was in those college years.”

In his first General Conference talk as an Apostle, Ronald credits his wife for molding him “like potter’s clay into a more polished disciple of Christ.” They are the proud parents of 5 (and their spouses) and the grandparents of 24.

Ronald was two semesters away from graduating when Jon Huntsman, a friend of his, invited him to join his company. It was a fantastic opportunity, with just one catch: Jon needed Ronald’s help immediately—in Troy, Ohio.

Ronald and Melanie prayed earnestly for guidance. Finally, Melanie asked, “Isn’t this what people go to college for, to find an opportunity like this one?”

The Spirit confirmed her advice and Ronald accepted the job. Eleven years later, Jon appointed Ronald as the president of his global corporation “with thousands of employees and billions in revenues.”

“This should suggest,” Ronald says, “that there is a masterpiece within each one of us, and when spiritually nurtured, carefully mentored, and loyally engaged in building up our families and the Lord’s kingdom, all things are possible.”

Ronald’s father and brother served their missions in Germany. As a 19-year-old, Ronald wanted desperately to serve there too. But the Lord had a different plan for Ronald, who was called to Eastern States Mission in New York City instead.

But Ronald wanted his own personal confirmation that this was the Lord’s will. So, after saying a prayer, he picked up the Doctrine and Covenants and came across the following words:

Therefore follow me and listen to the counsel which I shall give until you . . . and an effectual door shall be opened in the regions round about in this eastern land. Therefore, verily I say unto you, lift up your voices unto this people. (D&C 100:2-3, 5)

“I had a witness come across me,” says Ronald, “that not only should I be enthusiastic about that call but I knew it was exactly where the Lord wanted me to go. And I went from depression about my call to elation about my call that fast.” He served from 1970-1972.

Little did Ronald know that he would later serve the people of New York people again—this time as a mission president. Ronald says that this calling “brought [him] most to [his] knees the most.” He states that nothing can prepare you to be “a mission president and companion”; you need to rely on the scriptures.

While Ronald was in New York, Elder Neal A. Maxwell, there on Church business, wanted to hold a missionary conference. Ronald was asked to select a missionary to give the opening prayer.

Impressed to pick Elder Joseph Appiah from Ghana, Ronald called the elder in to speak with him. Upon being asked, the elder began to weep. He explained to Ronald that Elder Maxwell is very special to the people of Ghana—and to his family as well, as Elder Maxwell had been the one to seal his parents together in the Salt Lake City Temple.

Ronald expresses his gratitude for the inspiration that strengthened one missionary’s testimony.

In a Tornado Zone

Ronald became President and Chief of Huntsman Chemical Corporation in 1987. His time there taught him that “people are the most important asset.”

In 2013, Ronald put this valuable lesson to the test—in a tornado zone.

On May 20, a massive tornado tore through Oklahoma City. Destroying hundreds of homes, it even altered the landscape itself. A week after the disaster, Ronald went to visit the many ravaged neighborhoods.

He tenderly took my hand, as he would have done with each one of the victims and each of those helping with the devastation had he been there, and said: “First, tell them I love them. Second, tell them I am praying for them. Third, please thank all those who are helping.”

Ronald says that he “learned from our dear prophet what the storm-tossed people needed—love, prayers, and appreciation for helping hands.”

Ronald and his wife have met with hundreds of Church members all over the world. Although they rarely have time to sightsee, Sister Rasband happily states that she’s been able to do a lot of “Saint seeing” instead.

Here is a sampling of the places they’ve been:

As a new member of the Quorum of the Seventy, Ronald was asked to serve in the Area Presidency in Solihull, England. The Rasbands brought their two youngest children with them: their daughter, a young single adult, and their seventeen-year-old son, who was very into American football. Ronald and Melanie were concerned for their children. “Would this exciting new experience prove to be a serious trial for our family?” they wondered.

After the meeting, the Rasbands visited the beautiful Preston England Temple. They were greeted by the temple president and matron, who invited them to do baptisms for the dead. The Rasbands gratefully accepted. When they were finished, Ronald’s son asked, tearfully, “Why haven’t we done this before?”

In his talk “Our Rising Generation,” Elder Rasband states, “thanks to those caring and observant priesthood leaders, I knew then that our family was going to do fine in Europe.”

Ronald says he will never forget the meeting he attended in Camp Arifjan, Kuwait.

In a room no bigger than a garage, Ronald informed two dozen of the members serving there that “if President Thomas S. Monson could be there with them, he would tell them how much he loves them and how grateful he is for their service in representing our country and for their faithfulness in living the gospel of Jesus Christ.”

The members were excited to hear how gospel was spreading around the world. However, according to Ronald, the speaker who moved them to tears was Sister Rasband. “They were interested in what I said,” he says, “but she moved them to tears. I delivered a message, but she spoke to their hearts.”

This comes as no surprise, as Sister Rasband comes from a military family. Her own father left for Korea for a year when she was just four years old. She is keenly aware of the love that those soldiers felt for their families.

A few years ago, Ronald was asked to preside at two stake conferences in Lake Titicaca, Peru. One morning, he and his wife went out to visit the floating reed islands of Lake Titicata. They learned that the members of the Church had joined together and had built a floating island of their own.

As we visited, we learned that their children paddled by canoe 45 minutes to and from Puno for seminary and school each day. We were also pleased that these members knew the scriptures well, understood them, and loved them. Eagerly they showed us their current temple recommends, having been endowed and sealed in the Cochabamba Bolivia Temple.

Humbled by the chance he had to meet and pray with these members, Ronald considers his visit to Peru a building block in his house of faith.

Not long ago, Ronald and Melanie also met with the Saints in Fiji and India.

Ronald and Melanie’s visit to a Fijian village was equally inspiring.

Following a beautiful welcoming ceremony, Newsroom: Pacific states that “Elder Rasband presented village leaders with gardening tools and a sewing machine to assist the village in its development and beautification.”

The village had purchased rakes, wheelbarrows, and brush-cutters to clean their village, and were thankful for the additional tools. To Ronald, Samuela Tuidraki, one of the village leaders, said “We are so blessed to have you. You are not only taking the word of God but you’re also showing it.”

The Quorum of the Twelve

When President Thomas S. Monson issued the call for Ronald to serve as an Apostle, Ronald did what he’d done as a 19-year-old: he sought personal confirmation. A New Testament
scripture, John 15:16, came to mind: “Ye have not chosen me, but I have chosen you, and ordained you.”

Ronald knew that this calling wasn’t a vote or an election; it was the Lord’s desire and decision. He accepted the calling, and was named an Apostle of the Church of Jesus Christ of Latter-Day Saints on October 3, 2015.

Elder Ronald A. Rasband expresses gratitude for the opportunity he had “to be trained and taught at the feet of [Boyd K. Packer and Elders L. Tom Perry and Richard G. Scott].” On being an Apostle, he feels that the Latter-day Saint hymn “I Stand All Amazed” describes his feelings perfectly.

I stand all amazed at the love Jesus offers me,
Confused at the grace that so fully he proffers me. …
I marvel that he would descend from his throne divine
To rescue a soul so rebellious and proud as mine,
That he should extend his great love unto such as I,
Sufﬁcient to own, to redeem, and to justify. …
Oh, it is wonderful, wonderful to me!