Faith Family History I Will Go Before Your Face: A Small Missionary Miracle in Nebraska 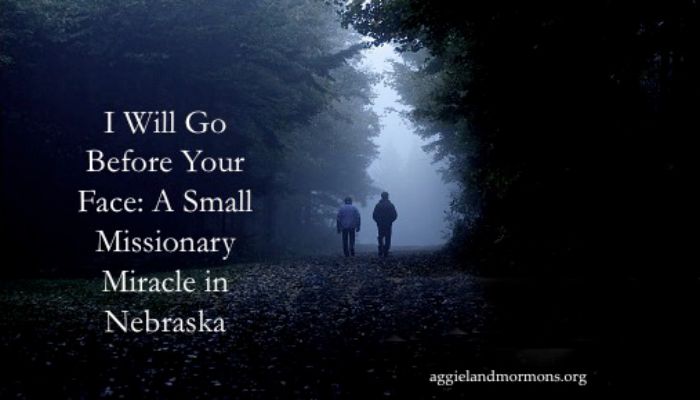 My great-grandfather, Robert Hill, passed away just a month after my eighth birthday, so I have mostly faint memories of him from my childhood. I knew him as a tough, old Idaho farmer who lost the three middle fingers on one of his hands in a farm accident. A favorite scene on our visits to my great-grandparent’s farm in Ucon was watching him retrieve little candies—he called them “hummingbird eggs”—from his candy jar using just his thumb and pinky finger. He would pass out the candies to all the grandkids.

Ten years after my Grandpa Hill’s passing and a year before I left to serve a full-time mission for The Church of Jesus Christ of Latter-day Saints in South Korea, I serendipitously came across a copy of his missionary journal in a closet in my family’s house in Salt Lake City. Until that moment, I didn’t know my family even had a copy of his missionary journal. But there it was. I can still remember the powerful spirit I felt as I flipped through the pages one afternoon and found myself lost in the stories of his missionary adventures. I learned, for example, that he had to sell his pocket-watch to get the money to buy the train ticket that carried him to his assigned area in the mission field. And then I found a brief, hand-written account of a memorable mission experience he had in Nebraska. I was so moved by his experience that I immediately typed up my own copy of it and later took that copy with me when I departed for Korea almost exactly 80 years after my grandfather set out on his mission:

The winter of 1916-17 was spent at Fremont, Nebraska, and on north up the Missouri River, including the towns of Blair, Tacoma, Decatur, and on up to the Winabago Indian Reservation. In the spring of 1917, beginning in May, with Elder Despain as my companion, we left Omaha to do country work in the same area that we had covered in the towns during the winter previous. We worked in this country until September 1st when I was called into Omaha and sent to Lincoln, Nebraska, to pick up a new companion by the name of Windley from St. Charles, Idaho. We were to work the country west toward Grand Island. On this trek, we had quite an experience, which I shall relate.

As we began our journey west leaving Lincoln at noon, we walked about twelve miles west and it was getting time to look for a place to stay, as a storm was brewing. The first place we asked was a Lutheran minister’s. His reply to our request was, “No sir! You can’t stay here! Neither will you stay anywhere as far as my telephone will reach.” You can see as this story progresses that he kept his word.

When this contact was made with the minister, it was getting dusk and the thunder and lightning increased by the minute it seemed. From the minister’s home (which was at the crossroads), I was impressed to change our course from west to north. When darkness fell, the only way we could see was by the flashes of lightning. Up until the time that people had all gone to bed, we received nothing but turndowns (thanks to the minister). But we trudged on, hoping and praying as we walked that we would find some place and would not be caught in the rain. I had seen some of Nebraska’s thunderstorms, and I did not want to be out in one, as I don’t believe there is any place where more water can be released than in this prairie country.

At about eleven-thirty, the elements were simply furious, and they had been so for several hours. Never had I seen a storm threaten for so long and not rain. Then suddenly I saw a dim light on my left, close to the road. Then by lightning, I saw a house and of course we made our way straight for it. It was a coal-oil lamp in a glassed-in porch. I opened the door to the porch and knocked on the house door. A lady came to answer; she had been in bed.

When I told her who we were and what we wanted, the first words she said to me were, “Now I know why I lit the lamp and went to bed and left it burning. I have never done that before, and I didn’t know what made me do it; but now I do.”

No sooner had she told us we could stay when the storm broke in torrents, and the wind began to blow also. But, not a drop did we get on us, so again I gave thanks to my Creator for His blessings to us. This night could have been most unpleasant had He not been mindful of us and prepared the way before us, as He promised He would.”

When I first read that experience of my grandfather and his companion–praying for success in the final minutes before the storm, searching in the darkness for a place to spend the night–I knew I would discover that the Lord had kept His promise: “And whoso receiveth you, there I will be also, for I will go before your face. I will be on your right hand and on your left, and my Spirit shall be in your hearts, and mine angels round about you, to bear you up” (Doctrine & Covenants 84:88). That is a promise I saw fulfilled over and over again on my own full-time mission, though thankfully we never had to worry about where to spend the night. I know the Lord is mindful of us, especially during the storms of life, even if the evidence that He has gone before us doesn’t usually come “until after the trial of [our] faith” (Ether 12:6). I am grateful for ancestors like my Grandpa Hill, who cared enough to record his life experiences, so that those stories could bless his posterity for many generations to come!