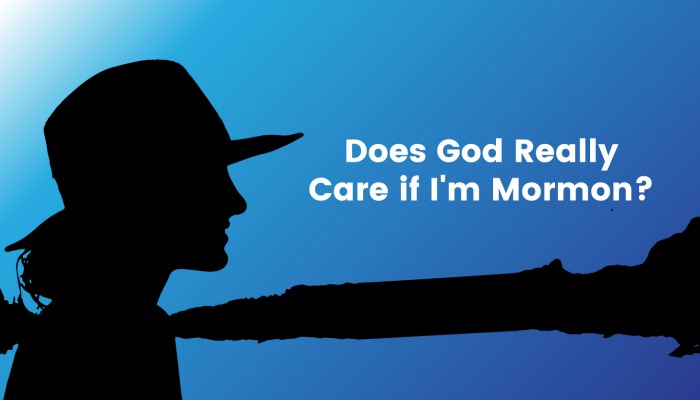 Thinking back to a time when I walked away from the teachings of the Church, I often excused my incredulous attitude with a rather lackadaisical approach. Meaning, I had questions of the Gospel and I had concerns of church history, but instead of taking the time to pray, to research, and to understand the bigger picture: I simply spat out a popularized anti-Mormon rumor and left it at that.

My flippant approach to fundamental gospel principles was irresponsible and damaging but not to the Church. Any damage sustained was to myself, my testimony, even my self-confidence.

One of the biggest excuses anchored in my brain was “God doesn’t care if I’m Mormon.” How could He care? I was a good person (still am by the way), I was a devoted mom, a faithful friend, and trusted colleague. If living a life of goodness and integrity were key cornerstones, then why would I ever need to go beyond that to live the Mormon standard? I was good enough, right?

Good enough where I didn’t need to fulfill my church callings or visiting teaching.

Good enough not to have to pay tithing.

Good enough so that I didn’t need to attend church.

Three hours of repetition equaled three hours of boredom. I could be doing other things, like sleeping or shopping or going to the movies, or sleeping. Three hours of obligation were no longer a toll I had to pay. This was an easy-to-apply, comfortable lie and I played this card for quite a number of years. I still believed in God, but I no longer felt that I had to prove it.

If He did care, then my eleven year marriage wouldn’t have unhinged. If He did care then my world wouldn’t be hiccuping into a desolate loop of re-runs: my pleas to have my past life returned to how things used to be. I didn’t want to move forward, I wanted what I once had. So in desperation one night in my new apartment, all alone, I sardonically called out to Him and asked why He had stopped caring. Was He even paying attention?

“Why did you stop caring?”

(Side note: Humility is a funny thing—here I was throwing a tantrum proclaiming that my life was in ruins because He left me and then five simple words and my stubbornness subsided and I had no more excuses.)

Fair enough, I had some work to do.

After praying and studying and understanding my role in the bigger picture, I came to the conclusion that I care. I do care if I go to church or not; taking the Sacrament each Sunday is a commitment I made at baptism. It’s not just about being good enough, but taking it a step further to renew those covenants I made with Jesus Christ: to always remember Him, to keep His commandments and to have His spirit be with me.

I do care if I pay a full tithe: an offering of gratitude for the earthly blessings I shouldn’t take for granted. It’s not enough to believe in the Gospel, but to apply it every day in our lives. God cares if we are Mormon because God needs us to lead this chaotic world with faith. Furthermore He needs us to serve His children with good works.

“What doth it profit, my brethren, though a man say he hath faith, and have not works? Can faith save him?

If a bother or sister be naked, and destitute of daily food,

And one of you say unto them, Depart in peace, be ye warmed and filled; notwithstanding ye give them not those things which are needful to the body; what doth it profit?

Even so faith, if it hath not works, is dead, being alone.

Faith without works is dead. More personally, my faith had diminished from the lack of good works I was willing to put forth. Faith is built from obedience, and I know what God asks of me.

Last week I watched my brother return home from serving eleven months in Afghanistan. The sacrifices he and his family made were a testimony of true faith in God. I watched my sister-in-law stand to the side as the kids raced by into their dad’s embrace—her standing as a barrier always watching, always protecting. This was a woman who, for the past year, raised three young children on her own to be independent, obedient and faithful human beings.

As her husband served God thousands of miles away, she was serving Him at home with good works, strength and dignity. With people turning against themselves: school shootings, riots, corruption and never-ending stream of hate-filled media outlets fueling the fire—here I had a shining example of how two obedient children of God could bring so much light into this world.

I’ve seen God’s love, I have felt His blessings. If I could give just enough of myself as my brother and sister have, then I too will receive His promises. Promises of eternal happiness, forever families and a place by His side. 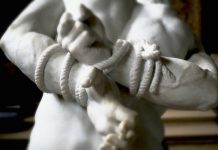