Faith Gospel Doctrine What Does It Mean to Be “Transfigured?” (Plus 8 Stories of It... 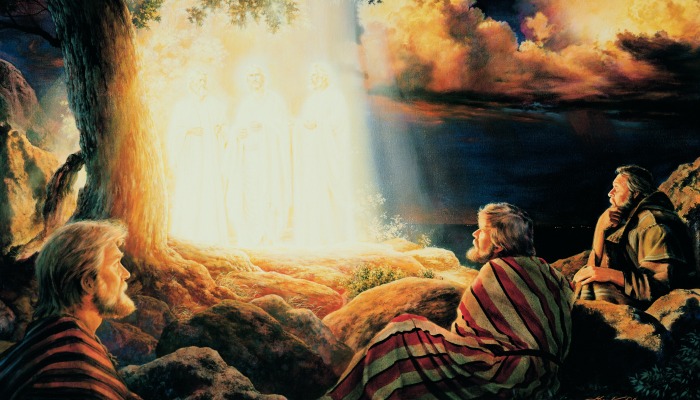 I recently wrote a separate article about a fascinating story told by early Latter-day Saint Mary Elizabeth Rollins. She related an experience she had in a meeting with Joseph Smith. This is what happened:

As we stood there talking to them, Joseph and Martin Harris came in. Said he ‘There are enough here to hold a little meeting.’ Joseph looked around very solemnly. It was the first time some of them had ever seen him. They got a board and put it across two chairs to make seats. Martin Harris sat on a little box at Joseph’s feet. They sang and prayed. Joseph got up and began to speak to us.

As he began to speak very solemnly and very earnestly all at once his countenance changed and he stood mute. Those who looked at him that day said there was a search light within him, over every part of his body. I never saw anything like it on the earth. I could not take my eyes off of him. He got so white that anyone who saw him would have thought he was transparent. I remember I thought I could almost see the bones through the flesh. I have been through many changes since, but that is photographed on my brain. I shall remember it and see in my mind’s eye as long as I remain upon the earth.

He stood some minutes. He looked over the congregation as if to pierce every heart. Said he: ‘do you know who has been in your midst?’ One of the Smiths said ‘an angel of the Lord.’ Martin Harris said: ‘it was our Lord and Savior, Jesus Christ.’ Joseph put his hands down on Martin and said: ‘God revealed that to you. Brothers and Sisters, the spirit of God has been in your midst. The Savior has been here this night and I want to tell you to remember it. There is a veil over your eyes for you could not endure to look upon Him.

On another occasion she related the same account with slightly different wording. She said,

Suddenly he stopped and seemed almost transfixed. He was looking ahead and his face outshone the candle which was on a shelf just behind him. I thought I could almost see his cheek bones. He looked as though a searchlight was inside his face.

Personally, I find her descriptions absolutely riveting. But what exactly is going on here? Why is Joseph … glowing? Well, (as you probably already know) we Latter-day Saints call it “transfiguration.”

Transfiguration renders one able to withstand the presence of God or sometimes, His messengers). Doctrine and Covenants 67 teaches,

This “quickening by the Spirit of God” is transfiguration. Moses describes this experience in a bit more detail in the Pearl of Great Price:

And he saw God face to face, and he talked with him, and the glory of God was upon Moses; therefore Moses could endure his presence…

But now mine own eyes have beheld God; but not my natural, but my spiritual eyes, for my natural eyes could not have beheld; for I should have withered and died in his presence; but his glory was upon me; and I beheld his face, for I was transfigured before him.

And it came to pass that when Moses had said these words, behold, Satan came tempting him, saying: Moses, son of man, worship me.

And it came to pass that Moses looked upon Satan and said: Who art thou? For behold, I am a son of God, in the similitude of his Only Begotten; and where is thy glory, that I should worship thee?

For behold, I could not look upon God, except his glory should come upon me, and I were strengthened before him. But I can look upon thee in the natural man. Is it not so, surely?

Blessed be the name of my God, for his Spirit hath not altogether withdrawn from me, or else where is thy glory, for it is darkness unto me?

From Moses’ experience, we see clearly that transfiguration occurs out of necessity—it’s not just a nice visual touch to make everything a bit more sparkly. A mortal man or woman would not be able to endure the presence of God unless his glory rested upon them as well.

We’ve already looked at Moses and Joseph Smith, but are there records of any other similar cases of transfiguration? Yes, yes there are. This list is far from comprehensive, but here’s a sampling of stories you’ve probably heard before, but may not have associated with transfiguration:

And after six days Jesus taketh Peter, James, and John his brother, and bringeth them up into an high mountain apart, And was transfigured before them: and his face did shine as the sun, and his raiment was white as the light. And, behold, there appeared unto them Moses and Elias talking with him.

Not it came to pass after Abinadi has spoken these words that the people of king Noah durst not lay their hands on him, for the Spirit of the Lord was upon him; and his face shone with exceeding luster, even as Moses’ did while in the mount of Sinai, while speaking with the Lord.

Transfiguration of Jesus’ disciples in the Americas

… And he turned from the again, and went a little way off and bowed himself to the earth; and he prayed again unto the Father … And when Jesus had spoken these worked he came again unto his disciples; and behold they did pray steadfastly, without ceasing, unto him; and he did smile upon them again; and behold they were white, even as Jesus.

And it came to pass, when Moses came down from mount Sinai with the two tables of testimony in Moses’ hand, when he came down from the mount, that Moses wist not that the skin of his face shone while he talked with him. And when Aaron and all the children of Israel saw Moses, behold, the skin of his face shone; and they were afraid to come nigh him.

As a side-note, it’s interesting that the Israelite reaction is similar to the reaction of, for example, the shepherds in the presence of the angel who announced Christ’s birth:

And lo, the angel of the Lord came upon them, and the glory of the Lord shone round about them: and they were sore afraid. And the angel said unto them, Fear not: for, behold, I bring you good tidings of great joy, which shall be to all people.

Compare Moses’ transfiguration and subsequent vision of God’s creation with the following vision had by Joseph Smith, as related by Anson Call:

…while he [Joseph] was talking his countenance change to white; not the deadly white of a bloodless face, but a living brilliant white. He seemed absorbed in gazing at something at a great distance, and said: ‘I am gazing upon the valleys of those mountains [the Rocky Mountains].’ This was followed by a vivid description of the scenery of these mountains, as I have since become acquainted with it.

Account from Edward Stevenson, early 1890s: While speaking to a congregation, Joseph’s “countenance seemed to assume a heavenly whiteness.”

Transfiguration not limited to people

To preface this principle we need to review a couple of scriptures. First, Doctrine and Covenants 93:27-28 mentions that,

…no man receiveth a fulness [of truth] unless he keepeth [God’s] commandments. He that keepeth his commandments receiveth truth and light, until he is glorified in truth and knoweth all things.

…that body which is filled with light comprehendeth all things. Therefore, sanctify yourselves that your minds may become single to God, and the days will come that you shall see him…

In other words, the pattern is this: Obedience+Sanctification=additional light and truth. Notice how this same process is evident in reference to earth itself in section 88 combined with verses from section 130:

And again, verily I say unto you, the earth abideth the law of a celestial kingdom, for it filleth the measure of its creation, and transgresseth not the law—Wherefore, it shall be sanctified; yea, notwithstanding it shall die, it shall be quickened again, and shall abide the power by which it is quickened, and the righteous shall inherit it.

The angels do not reside on a planet like this earth; But they reside in the presence of God, on a globe like a sea of glass and fire, where all things for their glory are manifest, past, present, and future, and are continually before the Lord.

…This earth, in its sanctified and immortal state, will be made like unto crystal and will be a Urim and Thummim to the inhabitants who dwell thereon, whereby all things pertaining to an inferior kingdom, or all kingdoms of a lower order, will be manifest to those who dwell on it; and this earth will be Christ’s.

Earth “abides the law” (obedience), becomes “sanctified,” becomes similar to the globe of “glass and fire” whereon angels dwell, and acts as a Urim and Thummim to its inhabitants, making manifest unto them “all things” (additional light and truth).

This is just my personal observation and creeping into the realm of speculation (be ye warned), but it seems to me that transfiguration can occur on a spectrum. In Christ’s case, even his clothes are described as “white as the light.” But in other cases, it seems to only be the person’s face or “countenance” this is illuminated. While both cases describe a dramatic change, could smaller-scale sanctification/transfiguration be taking place in other ways? For example, when the Spirit of God whispers revelation to your mind, that thought gives us a glimpse into the mind of God himself. If our minds are aligned and one with God, even for a brief moment, would that necessitate a degree of transfiguration? It could give new meaning to scriptures like Doctrine and Covenants 6:15,

Behold, thou knowest that thou hast inquired of me and I did enlighten thy mind; and now I tell thee these things that thou mayest know that thou hast been enlightened by the Spirit of truth…

Just food for thought. Speaking of which…

Do you have any additional thoughts on transfiguration? Let me know in the comments! 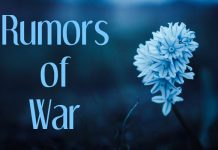 Wars or Rumors of War? Greater Perceptions of Violence in a World of Peace