Faith Defending the Faith The Patience Principle: How Not to Rush to Judgment 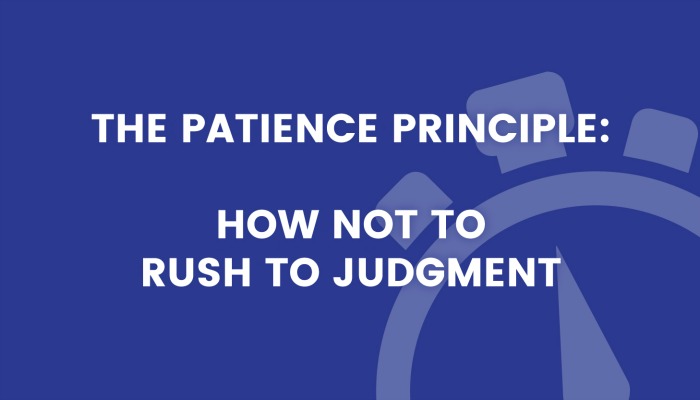 I recently learned that the bishop of my youth, Walker Halliday, had passed away. Bishop Halliday was a wonderful, unassuming leader, who had a mighty influence on how I think about the gospel. Not only was he the inspired bishop who “released” me from Scouting when I was 15 (another story for another post), he also taught by example the importance of patience.

I was waiting for my mission call when the “Salamander letters” came to light. For those of you who are too young to remember, in the early 1980s, a number of purported documents from early in the history of the Church were released. One was a letter that Martin Harris supposedly wrote in which he said that instead of the Angel Moroni appearing to Joseph Smith, it was some kind of angelic salamander.

Yeah, Moroni apparently was a lizard.

I was more than a little freaked out by the letter, as were lots of folks in the Church. Fiery salamanders seemed like the kind of thing that probably should have been mentioned to us. The weekend after the letter came to light, I was sitting in a Ward Correlation meeting (like Ward Council, but more boring) as the Young Adult representative. Our High Priests Group Leader was a history professor at the local community college. He was pretty worked up over the lizard-from-heaven thing, but showed up at the meeting ready to set the record straight.

He insisted on getting some time at the beginning of the meeting, and Bishop Halliday acquiesced. This brother then proceeded to explain that he had been researching the issue and had learned that it would have been common for 19th century Americans to refer to angels as a salamander. He had all sorts of things to read to us to put us at ease.

It didn’t work. He went on for about 15 minutes explaining his theory to us, and the longer he talked, the more worried I got. If we had to go to these lengths to explain that letter, we were in serious trouble. But this brother was very proud of having wrestled logic to the breaking point, and he ended his reptile defense (or maybe amphibian…I don’t know my salamanders that well) with an expectant look on his face. He was waiting anxiously for a vote of approval.

I will never forget Bishop Halliday’s reaction. He was a little guy with a friendly and happy disposition. But he wasn’t much of a talker. He sat back on his chair, broke into a small smile, and said, “Well, I think I’ll just wait a while and see how this turns out.” Then he started the rest of the meeting. Our local historian clearly was disappointed at being dismissed so abruptly, and I was a bit shocked. Not only had he not addressed the letter, he hadn’t said “boo” about the defense of the letter. He just shrugged and carried on with business as usual. I, on the other hand, was thinking that I needed to get my mission application back.

It was just a few days later that we learned that the letters were determined to be very well-made forgeries. When the news hit, I immediately thought of Bishop’s Halliday’s reaction to the controversy. He was neither a scholar nor an apologist, but he also was not easily given to panic. He knew what he knew, and he was willing to withhold judgment in order to see how things worked out.

Patience is an increasingly rare virtue in our rush-to-judgment world. When news breaks, we expect immediate notification and simultaneous analysis. By the time we have thought anything through, it is yesterday’s news and we have moved on to the next exciting headline. If something happens, or is reported to have happened, within the Church, there is considerable pressure to declare your position on it.   The speed of our reactions is valued at a premium over the quality of our reasoning.

I have lived long enough to see my share of questions raised about the Church. Outrage over this or that General Conference talk or policy change.   Questions about public statements made by the President of the Church. General Authorities excommunicated or removed from their positions. In my experience, I have found that the “Halliday Approach” works wonderfully. You don’t plug your ears to unpleasant information, but you also don’t rush to stake out your position or turn in your temple recommend it the first uncomfortable question. Slow down, gather information, and wait and see.

Things have a way of working themselves out. But only always.