Faith What to Do When Imposter Syndrome Leaves You Feeling Like a Fake...

You might have heard this phrase thrown around in a Ted Talk or two. Or even read about it in a recent Time Magazine article. It’s a term that has become all the rage in the world of psychology.

Identified over 40 years ago by two researchers, Imposter Syndrome is something we have all experienced in one way or another. Put in more basic terms, this condition is a severe case of insecurity and self-doubt.

No amount of recalling achievements or accolades can bolster us when the symptoms of Imposter Syndrome hit because suddenly none of that matters. We are simply deathly afraid that we will be “found out” as a fraud. That someone will notice our perceived abilities are simply a cover-up for an extremely unskilled and clueless person.

Typically, psychologists have referred to Imposter Syndrome as it applies to the business world. But most of us have also seen this syndrome rear its ugly head in a church setting. This could be identified as Spiritual Imposter Syndrome.

And it affects more members of the Church than we realize.

One of the obvious victims of Spiritual Imposter Syndrome could be a newly baptized convert to the Church. No matter how much she tries to walk the walk, talk the talk, or even dress the dress, she feels like her testimony will never match up to Sister “Utah Native” or Brother “Great-Grandson of President Kimball.” This new member will readily admit that she is experiencing an outpouring of blessings related to her conversion. But she will also confess that a nagging feeling that she will never measure up creeps in on a constant basis.

Little does she know that she is not alone.

There’s Brother “Lifetime Member” who has faithfully served in callings large and small, but worries that he can’t match up to the other brothers in the ward who he sees as spiritual giants.

There’s also the Relief Society president (yes, she can become a victim to Spiritual Imposter Syndrome, too). She looks like a polished and poised Latter-day Saint on the outside, but inside she is constantly worried that someone will find out she has a wayward child, that her housekeeping skills aren’t the best, or that she frequently suffers from anxiety.

But what these three people don’t realize is that rather than being the one odd man out, they are really in the majority.

You see, we all have our moments of doubt. And many of us often feel like we are just winging it—in the gospel and in lots of other aspects of life.

The scriptures even have of examples of people experiencing Imposter Syndrome. I mean doesn’t Nephi’s dramatic declaration, “O, wretched man that I am!” have Imposter Syndrome written all over it? 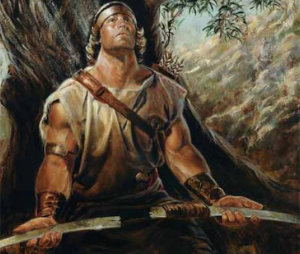 And how about the story of Gideon in Judges chapter 6? He doubted himself so much he wasn’t even sure it was really the Lord talking to Him. And when He did figure out it was really the Lord, He still couldn’t fathom the possibility of being called to lead an army, seeing how he was, “the least in [his] father’s house” (Judges 6:15).

Now you maybe don’t feel as alone in experiencing feelings of inadequacy and self-doubt. But what do you do about it?

Well, one of the most important things you can do is recognize these feelings for what they are—a serious case of the natural man surfacing to deny you your true identity.  This is a part of our personality which is an enemy to God and tends to heed to the whisperings of the adversary, rather than the Holy Ghost. Whisperings that, more often than not, play like a broken record the words, “You are just a fake and everyone knows it.”

After all, Satan is the first and original imposter, right? While we might just feel like a fraud, he really is a fraud. And he wants us all to succumb to those feelings that we are no good and never will be, so we might as will give up and give in to him.

He tried this with Moses, who saw right through it and gave the rebuttal: “Who art thou? For behold, I am a son of God, in the similitude of his Only Begotten; and where is thy glory, that I should worship thee?” (Moses 1:13).

What gave Moses the courage to defy the father of all lies? How did he conquer his insecurities and declare boldly the truth about his divine nature?

Well, he knew his power came from a Supreme Being who is omnipotent, not from his own arm of flesh.

As a matter of fact, if we try to base our concept of who we are on our background and our accomplishments on earth, we will probably always experience Spiritual Imposter Syndrome. Because we are a fraud when we build our self-worth on worldly achievements or our superficial physical appearance.

In contrast, when we anchor our identity in our divine nature, just as Moses did, we will have the kind of confidence to authentically declare in the face of anyone (including the adversary): “I AM A CHILD OF GOD!”

So next time you walk into church and you feel like your testimony isn’t as strong, your prayers aren’t as eloquent, your suit isn’t as nice or your lesson isn’t as inspirational as everyone else’s, just remember—you are in the majority.

In fact, you are surrounded by imperfect people like yourself, who are relying on a merciful God to provide for them the ability to become what He knows they can become. A God who, through His son, has given us a way to overcome the doubt and fear of Imposter Syndrome and replace it with the confidence and faith of an authentic child of God.