Faith Belief “Jesus is my Elder Brother” — Not so Fast

Given what I know about the lack of scripture on the subject, I asked myself, “what is the draw to this practically irrelevant fact? Why so much emphasis on this—a-scriptural pleasantoid? Is there something in seminary curriculum that emphasizes this? The other detracting factor is that if Jesus is your Elder Brother, so is Satan.

I would not refute the idea that Jesus, the Son of God, shares sibling, spiritual DNA (if there is such a thing) with you and me. I will say, that of the two familial relationships you have with Him, the sibling claim suffers in significance in comparison to His Fatherhood, can be a distraction, and can lead to apostasy.

The “Elder Brother” claim comes not from scripture, but from logical inference. The inference is best explained by “A Doctrinal Exposition by the First Presidency and the Quorum of the Twelve Apostles.” Basically, the document concludes, “There is no impropriety, therefore, in speaking of Jesus Christ as the Elder Brother of the rest of humankind,” but “not improper” does not necessarily equate to useful and may equal problematic.

At its core, the lack of utility and even dysfunction in referring to Jesus as our Elder Brother can be emphasized by reviewing several scriptures that, at least at face value, cause problems for the notion of Jesus’ brotherhood.

For example, one scripture passage that vexes members immersed in the Jesus as brother paradigm (and other members as well) is found in Mosiah 15:1-4.

1 And now Abinadi said unto them: I would that ye should understand that God himself shall come down among the children of men, and shall redeem his people. 2 And because he dwelleth in flesh he shall be called the Son of God, and having subjected the flesh to the will of the Father, being the Father and the Son— 3 The Father, because he was conceived by the power of God; and the Son, because of the flesh; thus becoming the Father and Son— 4 And they are one God, yea, the very Eternal Father of heaven and of earth.

The Jesus as brother difficulty comes in as Abinadi talks about Jesus as both Father and Son. In whatever sense He is my Father, He is not my Brother, so we have some choices to make. If we cling to the brotherhood idea, we need to explain away His fatherhood as hyperbole, metaphor or something else, or at least narrow the range of His fatherhood. 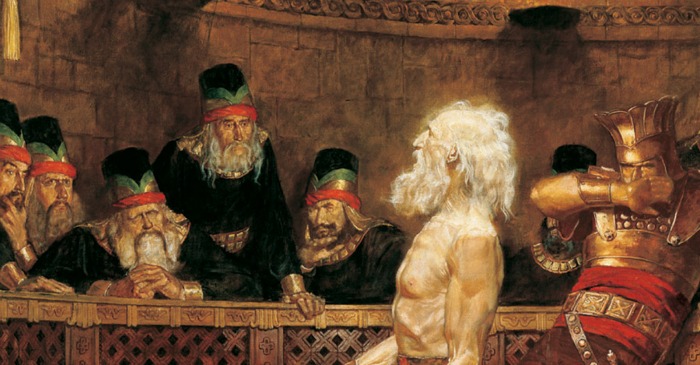 A second and very problematic pair of verses come from a dialogue between Zeezrom and Amulek. Alma 11: 38-39:

38 Now Zeezrom saith again unto him: Is the Son of God the very Eternal Father?

Sometimes I will have a reader stop there and answer the question for Zeezrom. The common answer is, “Well, no. There is a Son and a Father and there are different beings,” or some variation of that.

39 And Amulek said unto him: Yea, he is the very Eternal Father of heaven and of earth, and all things which in them are; he is the beginning and the end, the first and the last;

It does not bode well for brotherhood to have such an explicit contention that Jesus is the Eternal Father unless we narrow the range of fatherhood, but the Book of Mormon does not do that. If we take what Book of Mormon prophets teach at face value, Jesus is the Father. How so?

Mosiah 5 gives at least a partial answer. At the end of King Benjamin’s address, he put his people under covenant to do pretty much what we covenant to do at baptism and explains how Jesus becomes the Father:

7 And now, because of the covenant which ye have made ye shall be called the children of Christ, his sons, and his daughters; for behold, this day he hath spiritually begotten you; for ye say that your hearts are changed through faith on his name; therefore, ye are born of him and have become his sons and his daughters.

The point at which the covenant establishes His fatherhood, His Elder Brotherhood fades into irrelevance. Shortly after Adam’s baptism and confirmation, he received the Melchizedek priesthood and by entering into the priesthood covenant, became a son and Jesus his Father. Moses 6:

67 And thou art after the order of him who was without beginning of days or end of years, from all eternity to all eternity. 68 Behold, thou art one in me, a son of God; and thus may all become my sons. Amen.

“Thus may all become my sons,” certainly implying that they were not already his sons. The “after the order” part talks of Adam’s ordination to the priesthood which is also entering into a critical covenant, second only to baptism at the individual level. On a churchwide level, the Melchizedek priesthood covenant is the governing covenant. Without the priesthood, the baptismal covenant is not possible (D&D 84: 20-21). Then in Ether 3:

14 Behold, I am he who was prepared from the foundation of the world to redeem my people. Behold, I am Jesus Christ. I am the Father and the Son. In me shall all mankind have life, and that eternally, even they who shall believe on my name; and they shall become my sons and my daughters.

Again, “become” by entering into a covenant with Him.

The implications of this truth are vast. From now on, a person who understands this must ask the question when daughterhood or sonhood are implied or directly asserted, “Is this referring to childhood as being spiritual offspring by virtue of being spiritually born to a Heavenly Father and a Heavenly Mother, or is this Covenant birth?

For example, the Young Women recite, nearly weekly, “We are daughters of our Heavenly Father who loves us and we love Him.” Is this referring to being spiritual offspring which we share with devils, or does this refer to covenant daughterhood to Jesus Christ?

Moses is taught, or at least has it reiterated that he is a son of God meaning Jesus Christ. In Moses 1:

4 And, behold, thou art my son… 6 And I have a work for thee, Moses, my son; and thou art in the similitude of mine Only Begotten; and mine Only Begotten is and shall be the Savior, for he is full of grace and truth; but there is no God beside me, and all things are present with me, for I know them all.

The similitude part is a noteworthy priesthood statement. Here, Jesus is pointing out, not a physical resemblance, but a resemblance that comes from properly acting in the order of the priesthood that is after the Son of God (see Alma 13). 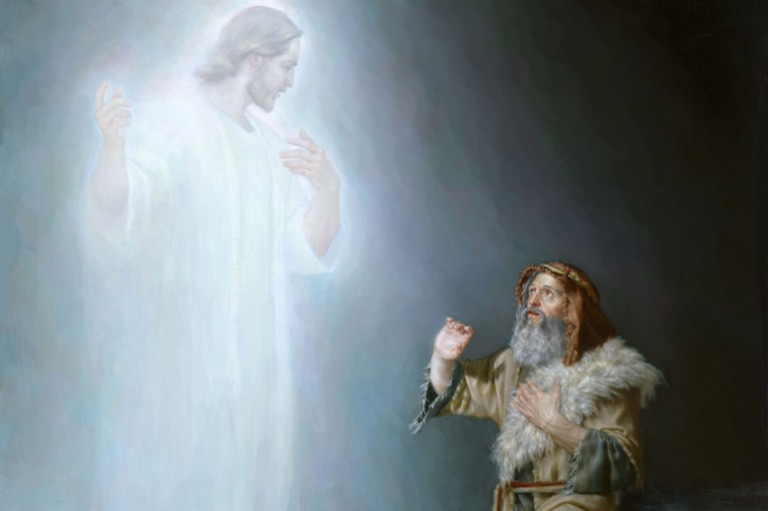 We have to ask the same question about fathers and covenants when we read Malachi in both the Old Testament and Moroni versions.

38 And again, he quoted the fifth verse thus: Behold, I will reveal unto you the Priesthood, by the hand of Elijah the prophet,before the coming of the great and dreadful day of the Lord. 39 He also quoted the next verse differently: And he shall plant in the hearts of the children the promises made to the fathers, and the hearts of the children shall turn to their fathers. If it were not so, the whole earth would be utterly wasted at his coming.

Maybe it is both, but the covenant version makes more sense, especially in the Moroni version and especially given the amount of genealogy we will be able to do in the millennium and the importance of covenants and their centrality to the restoration.

If you have ever skipped the Isaiah chapters in the Book of Mormon, you should consider re-reading them with a covenant backdrop. Keeping and violating the Mosaic and the Abrahamic covenants are of particular importance in the narrative. Consider how the first two verses in 2 Nephi 8 center the presentation in the covenant:

Again, look unto Abraham as our ancestral father or our covenant father? The difference in meaning is significant given what will follow for the next several chapters.

According to Moroni in the Title Page to the Book of Mormon, the book is about three things:

The Fathers, Covenants, Jesus triad is at the essence of the kingdom and the gospel and both governs and facilitates everything we are about.

Birth through covenant extends beyond covenant birth to God. Doctrine and Covenants section 84 records in a section that is not identical with but belongs to the priesthood covenants,

32 And the sons of Moses and of Aaron shall be filled with the glory of the Lord, upon Mount Zion in the Lord’s house, whose sons are ye; and also many whom I have called and sent forth to build up my church. 33 For whoso is faithful unto the obtaining these two priesthoods of which I have spoken, and the magnifying their calling, are sanctified by the Spirit unto the renewing of their bodies. 34 They become the sons of Moses and of Aaron and the seed of Abraham, and the church and kingdom, and the elect of God.

The fathers spoken of in the Title page are covenant fathers, and there are specific ones that represented specific covenants, ordinances, and keys that had to be given to Joseph Smith for the restoration of the Gospel to be possible. The most important of these and the one that had to precede all others is the covenant, keys, and ordinances of the priesthood. Once conferred, all other covenants, keys, and ordinances become both possible and effective.

Sometime before the formation of the Church in April 1830, Joseph Smith and Oliver Cowdery received the Melchizedek priesthood from Peter, James, and John, representing Jesus. Excepting the covenant of baptism, only after entering into the priesthood order headed by Jesus could the power, authority, ordinances, keys, covenants, agency, and blessings, such as the Abrahamic covenant be brought back and become part of the restoration.

Last week I taught Sunday School to 15 –16-year-olds as a substitute. Given the late notice (five minutes before class started) I opted to teach covenants, primordial, ancient and modern. Unfortunately, this discussion was new to most of the class. We went from scripture to scripture to scripture discussing each of the critical elements. Before long, members of the class started asking questions such as, “I have heard people talk about the Abrahamic covenant, but I really don’t know what that is. Can you explain it?”

Doctrine and Covenants 50:43 is a good summary of one of the most important and beautiful teachings in the gospel,

It takes two beings and one thing to be one with Jesus: Jesus, the Holy Ghost, and a covenant.  One implication of this pure, powerful and simple doctrine is that we would not refer to Him as our Elder Brother.