Faith You’re a Latter-day Saint and a WHAT? Prosecutor Edition

As a legal prosecutor, AnnMarie Howard has come in contact with some of the worst the world has to offer: rape, abuse and murder.

“I have to consciously make the effort to remember that there is a lot of good in this world,” said Howard.

Despite the trying nature of her work, Howard’s testimony in the Church of Jesus Christ of Latter-day Saints remains unwavering; in fact, Howard has seen some parallels between her work and the principles and doctrines of the Church.

Howard first decided she wanted to be a lawyer when she was in sixth grade. She credits one of her neighbors, who was an attorney, as the initial inspiration for her law career.

“I just got to see that a lot of people in my community went to him for help,” said Howard.  “And he was, quite often, a spokesperson for different people, and at one point he was my bishop, so he had a profound influence on me.”

Howard would go on to receive her bachelor’s degree from Brigham University where she was later accepted into the J. Reuben Clark Law School.

During her first semester of law school, Howard found out she was expecting her first child, which affected the internship opportunities she wanted to pursue.

“I just wanted something that was going to be close,” said Howard. This turned out to be a blessing for Howard. She found a job with a prosecutor from her hometown, and she’s been there ever since.

Since first being hired on, Howard has been promoted to Chief Deputy Attorney. This means that Howard handles most of the special victims’ cases, including homicide and sexual assault. Howard is with the victim from day one and follows the case all the way through.

Howard said at times, seeing the atrocities in the world takes a negative toll.

“It is hard,” said Howard. “My children would tell you that I’m very paranoid. Very early on I started having the sexual assault cases for children . . .  and I’ve had to be very, very careful that I’m making sure my kids are having normal, healthy interactions with adults.”

Connecting Work as a Prosecutor and the Gospel 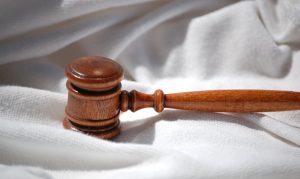 However, Howard’s job as a prosecutor isn’t all negative. The best way to remember the good in the world is to talk to the victims, said Howard.

Even though I hear the bad from them, a lot of times they are such good examples,” said Howard. “I have met some very, very incredible children, women and men who were victims of very serious things who have shown how to be resilient.”

“One thing is to understand that people that can improve and people can change,” said Howard. “We believe in the LDS faith that we can, and sometimes I lose sight of that when I’m dealing with defendants who have done horrible things. So I just have to step back and remind myself.”

Another connection is the forgiveness process. Howard says her religion is most important in her work when she’s talking to victims.

“[The forgiveness process] is different for everyone,” said Howard. “I don’t tell them they have to — it’s their choice — but at some point, they will be ready to forgive, and that will be a healing balm for them.”

Howard says a lot of people ask her what she believes to be a “curious question”: how do you balance motherhood and work?

“Balance really depends on you,” said Howard. “What do you think means balance? What is it that you would like to have? And how is it that you’re going to make it work with the things that are important to you? So balance isn’t necessarily a working mother’s issue; it’s a working person’s issue.”

She also added that balance isn’t a perfect process. “Some days you go to bed and you think you’ve nailed it. Other days, you just haven’t,” said Howard. “Balance is coming to the point where you realize what’s important to you and recognizing how to keep those important things satisfied as much as possible — something she says is made that much easier with modern technology.

“Technology has revolutionized what I can do and still be able to be where I need to be with everything,” said Howard. “It’s really made it a lot easier for me to manage being a mom and a good employee.”

Throughout her career as a prosecutor, Howard has seen people struggle to have faith in the legal system because their case is taking a long time or things aren’t going how they expected them to.

“The process works, it’s not perfect; it’s not a great Bandaid for the kinds of wounds people can get, especially in criminal law, but it does work by and large,” said Howard. “Let the process happen, we’ll figure things out.”