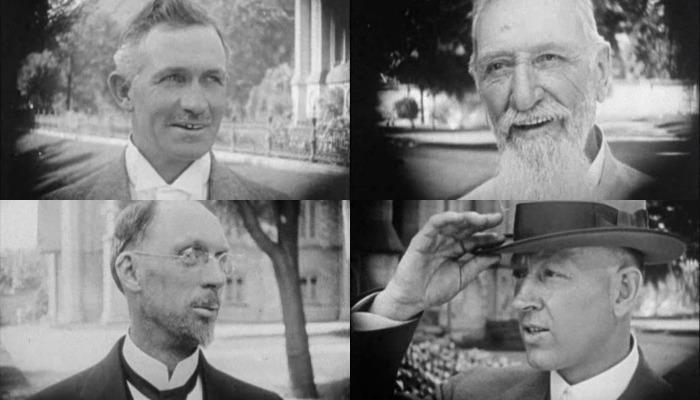 Guys, I’ve been doing some digging and I stumbled upon a couple of gold nuggets the other day: Actual black and white video footage of early LDS Church leadership. And it’s awesome. Strangely, it doesn’t come from any of the Church’s official YouTube channels. I found it on a channel called “lds9999,” but as far as I can tell, it’s legit. What you’re about to see is a pair of short documentary-style videos of LDS Church leadership from the early 1900s. Based solely on context clues, I think the creators must have added the audio narration in the late 1940s, years after actually shooting the video.

I’ve never seen video of Joseph F. Smith before, but he sure looks like a nice guy, as do the others. Keep your eye out for Melvin J. Ballard in there, who was the grandfather of our current apostle, Melvin Russell Ballard. Anyway, take a look (if you’re short on time jump to the links below the videos):

The videos feature the familiar (albeit, much younger in some cases) faces of Joseph F. Smith, David O. Mckay, Joseph Fielding Smith, Heber J. Grant, James E. Talmage, J. Golden Kimball, B. H. Roberts, and plenty of others. Together, the videos are about 20 minutes long. If you don’t have that kind of time here are a few links to some of the more high-profile faces previously mentioned:

And while we’re on the topic of LDS Church leadership, take a look at this video of President George Albert Smith (much older than the version we just saw of him) testifying to the Saints back in the day. The Church published it several years ago on YouTube, but for whatever reason, I haven’t seen it until now (actual video starts at about 13 seconds):

President Smith sure liked to use his hands when he spoke.

Who stood out to you in these videos? Share your thoughts with us in the comments!