Faith LDS History Fun Facts and Ways to Celebrate the 150 Year Anniversary of the...

On May 10, 1869, the Central Pacific and Union Pacific railroads connected at Promontory Summit in Utah. To commemorate the event, several golden spikes were created. A special wooden tie was laid, and Leland Stanford drove one golden spike into it as onlookers cheered. The spike is now displayed in the Cantor Arts Center at Stanford University (Wikipedia). 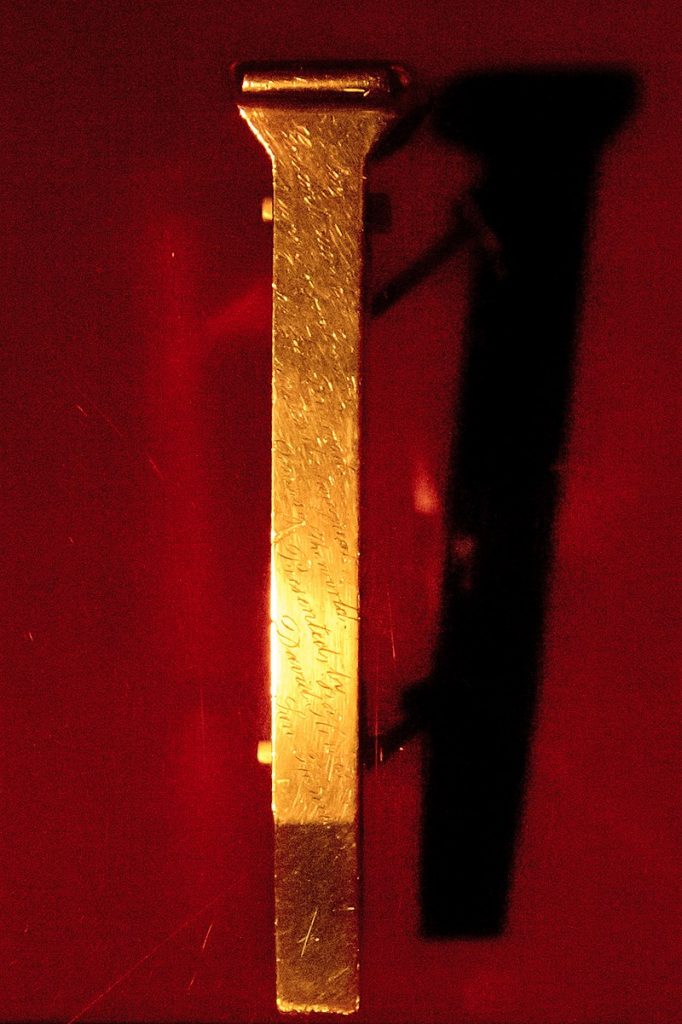 With the completion of the Intercontinental Railroad, Latter-day Saints stopped crossing the plains in wagons or pushing handcarts and simply took the train. This transformed the process of emigration to Utah and indeed made Utah and Salt Lake City “the crossroads of the west.”

The transcontinental railroad being finished with a spike of gold was the brainchild of David Hewes, a San Francisco financier and contractor. Two trains met at Promontory, Utah, to join the tracks being laid from east to west and west to east — Union Pacific No. 119 and Central Pacific No. 60 (better known as the Jupiter). Between 500 and 3,000 people were there to witness the momentous event.

In the United States, the event has come to be considered one of the first nationwide media events. The locomotives were moved forward until their “cowcatchers” met, and photographs were taken. Immediately afterward, the golden spike and the laurel tie were removed, so they wouldn’t be stolen, and replaced with a regular iron spike and normal tie. At exactly 12:47 pm, the last iron spike was driven, finally completing the line. The news was immediately sent by telegraph so it could be reported in the papers.

With the completion of this line and a few additional branches, one could travel east to west from Sacramento to Omaha, or the reverse. Latter-day Saints still had to cross the Missouri River by boat at Council Bluffs to get to Omaha. Later, lines were added to fully traverse the continental U.S.

In 1957, Congress established the Golden Spike National Historic Site to preserve the area around Promontory Summit as closely as possible to its appearance in 1869. For the May 10, 1969, centennial of the driving of the last spike, the High Iron Company ran a steam-powered excursion train round trip from New York City to Promontory. The Golden Spike Centennial Limited transported to 100 passengers including, for the last leg into Salt Lake City, actor John Wayne (Wikipedia).

Utah was the site of one of the first branch lines on the Pacific Railroad. And Utah especially was both the benefactor and beneficiary of the railroad. The Church of Jesus Christ of Latter-day Saints utilized the railroad greatly with its missionary and immigration programs, and the mining industry could be developed extensively only with the aid of the railroad.

Publisher Samuel Bowles said, “…but for the pioneership of the Mormons, discovering the pathway, and feeding those who came out upon it, all this central region of our great West would now be many years behind its present development, and the railroad instead of being finished, would hardly be begun.” Bowles, however, thought the railroad would mark the end of the “Mormon Church.”

Anti-Mormon feelings did influence the construction of the railroads. It’s possible that the leadership and membership of the Church could have played a more important role and done a good job with it, thus bringing money to the Church and its members. Instead, Brigham Young jumped at the chance to take subcontracts on the two railroads, to give his people some work and income.

Years earlier Brigham Young had declared that if the government did not build the railroad, Utah would, if granted statehood. The Latter-day Saints actually received considerably less than the small payment agreed upon, due to financial wranglings by certain railroad officials.

From Brigham Young: “Speaking of the completion of this railroad, I am anxious to see it, and I say to the Congress of the United States, through our Delegate, to the Company, and to others, hurry up, hasten the work! We want to hear the iron horse puffing through this valley. What for? To bring our brethren and sisters here.” He might have added, “To help us transport our missionaries forth and back. To provide us some cash employment. To help keep our men busy. To help provide a cash market for our produce.”

Many people in Utah worried that railroad workers and non-member travelers would flood into the territory and be a bad influence on the Saints. Brigham Young retorted, that the faith “must indeed be a damned poor religion if it cannot stand one railroad!” It turns out that In the 1860s the officials of Union Pacific and Central Pacific were almost the only non- Mormon citizens of the United States who had warm, friendly feelings toward the Mormons. (Read more at The Iron Trail to the Golden Spike.)

Celebrate the Sesquicentennial Anniversary of the Golden Spike

All sorts of events are scheduled to celebrate this historical triumph. Choose one of the links below.