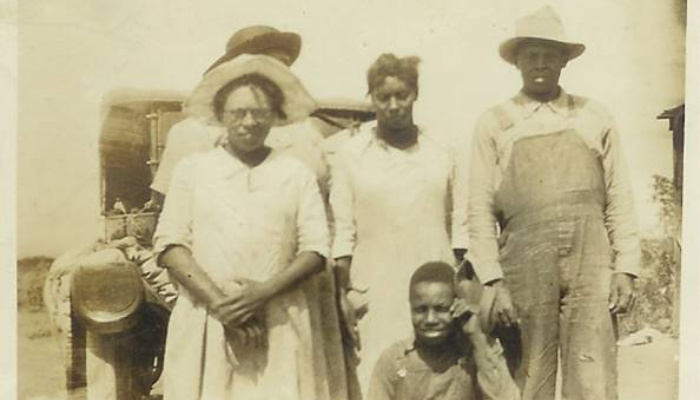 As a church, we focus pretty heavily on our history. Who hasn’t heard stories of the early Saints in Nauvoo or the members of the Church who gave up everything they had to pull a handcart all the way to Salt Lake? Sadly, like most history in the United States, the Church’s history has been white-washed.

I don’t think this is any reflection on the Church itself but rather a reflection of our nation’s struggle with race. In fact, the Church has published numerous first-account sources, articles, biographies and more of early black Latter-day Saints on their website — but decades of tradition is hard to kill, which is why I think a lot of members have never heard about black LDS pioneers.

It’s also important to note that some early Saints, especially those from the North were ardently against slavery. Joseph Smith wasn’t quiet about his abolitionist stance, which caused a lot the persecution the Church faced in Missouri (a slave state at the time).

In honor of Black History Month, I’d like to set the record straight and shed some light on the stories of black saints that have shaped our history. Below you’ll find a crash course about black Latter-day Saint History.

Way before the ban on the priesthood ever existed, Elijah Abel was ordained to the priesthood by Joseph Smith in 1836. Shortly after his ordination, Abel became a member of the Seventy. He contributed a lot to the early Church, including serving multiple missions and helping construct the Salt Lake Temple. Despite the prejudice he faced, including being denied entrance into the temple he had so generously helped construct, Abel remained a faithful member of the Church until his death in the late 1880s.

The largest congregation outside of church headquarters is presided over by Joseph T Ball Jr.

Joseph T. Ball Jr. was baptized into the Church in the early 1830s. He was later ordained an elder and served a mission with Wilford Woodruff. He later went on to become the first black man to preside over an LDS congregation. From October 1844 to March 1845 Ball served as the branch president in Boston, which was the largest congregation outside of Nauvoo at the time.

Green Flake, one of the earliest African-American members of the Church, was baptized April 7, 1844 at the age of 16. At the time, he was still a slave — something that wouldn’t change even after he made the long trek to the Salt Lake Valley. Flake drove Brigham Young’s wagon in the first pioneer company and was at the prophet’s side when he uttered the famous words “This is the (right) place.”

A year after being baptized in 1841 Jane Manning James decided to travel to Nauvoo to join the Saints. As a free woman, James faced substantial risk traveling from Connecticut to the South, yet this didn’t deter her. During her time in Nauvoo, James became close friends with the Smith family, especially Emma. She eventually moved to Salt Lake with the Saints. Over the course of her life, James would petition various prophets to receive her endowment. While her requests were never granted, James’ work was done posthumously as soon as Church policy changed in 1978. You can learn more about James, by watching the recently-released movie “Jane and Emma.”

The end of the Civil War allows Samuel D. and Amanda Chambers to join the Saints in the West

In 1844 when Samuel D. Chambers was 13 years old, he was baptized into the Church in secret because he was a slave at the time. As the Church moved West, Samuel lost any contact with the Latter-day Saints. Despite being “on his own” for decades, Samuel retained his faith. After the Civil War ended and he and his wife, Amanda, were freed from slavery, they started preparing for the journey West. Four years later they finally set off, and without any support or contact with the Church in Utah. Both Samuel and Amanda would remain active members in Utah until their deaths in the mid 20th century.

Len Hope defends his faith against the Klu Klux Klan

After reading in the Bible about the gifts of the Holy Ghost, Len Hope wanted those blessing for himself. He went to an isolated, dilapidated shack that was on his sharecropping property and began to pray. When he returned home after a day and night of praying, he discovered some LDS missionaries had left a pamphlet about the Holy Ghost with his family. He tracked down the missionaries and told them he wanted to be baptized immediately, but the missionaries suggested that he learn more about the Church first. World War One service took him away for a while, but he was baptized as soon as he returned. Then the Klu Klux Klan paid him a visit. They told him he had two choices: have his name removed from church records or die. Hope chose his faith, and apparently, he was rewarded. He went on to become close friends with Marion D. Hanks, a former president of the Quorum of the Seventy, while Hanks was serving a mission.

The Genesis Group is formed

Before the priesthood ban was lifted, Eugene Orr, Ruffin Bridgeforth Jr. and Darius Gray worked with Gordon B. Hinkley and Thomas S. Monson (both of whom were apostles at the time) to organize the Genesis Group to serve the needs of African-American members. The group continues to meet today. You can find more information about meeting times and activities on the Genesis Group’s Facebook.

Anthony Obinna builds up the Church in Nigeria

After becoming acquainted with the Church in a magazine article — where he recognized the LDS temple as the building he had been guided through by an angel in a dream years earlier — Anthony Obinna was anxious to learn more about the Church. The LDS temple that he saw in the article was the same building he had seen in a dream years before, so there was no doubt in his mind that he needed to learn more about the Church. In 1971 he sent a letter to Church Headquarters asking for instructions on how to join. He was sent some LDS literature, including a Book of Mormon, but was told the Church couldn’t be organized in Obinna’s home of Nigeria because there wasn’t anyone with the authority to do so in the country. But Obinna was determined. Following a program sent to him by the Church, Obinna organized and held weekly meetings until missionaries were sent to Nigeria in 1978. Obinna was soon set apart as the first black branch president in Africa and presided over the first official native branch organized in black Africa.

Under the priesthood ban, the notion that the Church was racist and that it didn’t have any black members was prevalent in the United States, especially after events like that with Wyoming’s Black Fourteen. After just four years in the Church, Wynetta Martin set out to change these stereotypes by becoming the first black woman to be in the Mormon Tabernacle Choir. She would go on to write “Black Mormon Tells Her Story: The Truth Sang Louder Than My Position” and would become the first African-American faculty member at Brigham Young University.

The ban on the priesthood and temple ordinances is lifted

For decades people of African descent weren’t permitted to participate in certain temple ordinances or to receive the priesthood. The ban was finally lifted in 1978. Joseph Freeman became the first black man to receive the priesthood shortly after the ban was lifted. Before the ban, Joseph’s wife, Toe, had to sacrifice having a temple marriage because of the restrictions placed on her husband. After Joseph received the priesthood, Toe and Joseph were able to be sealed together and to their children.

Marcus Martins like Freeman also made history following the historic announcement. Martins had been weeks away from getting married when the announcement came that he could now hold the priesthood. With the announcement came the question of whether or not he would serve a mission, a choice unavailable to him under the ban. Martins became the first black man to serve a mission following the ban. Luckily, his fianceé didn’t dear-John him and the couple was sealed in the São Paulo Brazil Temple after his mission. He is currently the Dean of Religious Education of BYU Hawaii.

Gladys Knight was baptized in 1997. Already a renowned soul artist, Knight believed the Church was lacking a little pep in their music. In 2003 she organized the Grammy Award-winning Saints Unified Choir. Today the choir is comprised of 100 multicultural voices. They specialize in gospel renditions of LDS hymns. One of their most recent performances was at the 2018 “Be One” celebration, which celebrated the 40th anniversary of the 1978 revelation on the priesthood. You can watch the entire celebration, including the choir’s performance, on the Church’s website.

In 2009 Elder Joseph W. Sitati was called as General Authority Seventy. as First Counselor in the Africa Southeast Area. At a recent conference, Elder Sitati addressed the priesthood ban by saying “Most active adult African Saints who have joined the Church since [the revelation on priesthood for all male members] know that this is a reality of the past, and have found individual answers in the restored gospel of the plan of happiness that give them understanding and peace regarding the unfolding events of the gathering of the Saints in these last days.”

There are countless other black members of the Church who built the Church to what it is today — undoubtedly a lot more than we have historical record of. If you know of more, please share them with us in the comments. I hoped this article has piqued your interest and showed you that our history isn’t made up of people who all look the same, even if that’s sometimes all we see or hear about. There’s a place for all of us in the Church, and there always has been. If you’re interested in learning more about black Latter-day Saint history, the resources below are a great start.